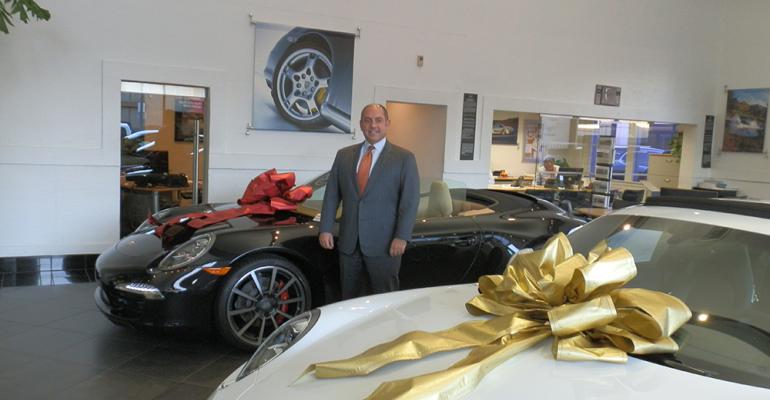 Chinese customers once were a rarity at Rusnak’s luxury dealerships. Now they account for a majority of customers at some of the group’s 11 franchises. That makes catering and marketing to this clientele a priority for No.53 on the WardsAuto Megadealer 100.

From figuring out what media mix works best for each dealership to making special banking arrangements to cover large cash payments, Rusnak is doing what it can to satisfy its growing number of Chinese customers.

“It is a challenge,” says Quincy Armstrong, the group’s marketing director.

The San Gabriel Valley, the Los Angeles area where Rusnak stores are located, has one of the largest Asian populations in the U.S. Their numbers are growing. In the 2010 census, Asians accounted for 28% of the San Gabriel population, up from 23% in 2000.

Ethnic Chinese by far are the largest group of Asians. They represent more than 50% of the population in some cities in the Valley, such as Arcadia, where Rusnak’s Mercedes store is located. Pasadena, where Rusnak has six showrooms, is 20% to 30% Asian.

There are many second- and third-generation Chinese residents of the Valley whose families immigrated from Hong Kong and Taiwan.

More recently, however, there has been an influx of immigrants from Mainland China. That includes many students as well as business people who come under a program that grants a U.S. visa if the holder invests and creates jobs here.

Each of Rusnak’s dealerships serves different segments of the Chinese population and caters to them accordingly.

William Mak, 30, who is from the Mainland China province of Guangdong and works in luxury-goods sales, is a typical customer for the Maserati dealership.  Mak was there looking to buy a white Maserati Ghibli sedan to replace his current Land Rover.

At all three of his stores, “We focus on making sure the experience is effortless,” he says.  That means going to someone’s house to reprogram a car or, in the case of Mak, paying a parking ticket received while visiting the store.

“Everyone needs to leave this store going, ‘Wow,’” says Arizmendi.

He does no TV advertising in any language, but does advertise in Chinese-language publications, including the World Journal and Epoch Times newspapers and several magazines.

The magazines exemplify the complicated equation for reaching different segments of the Chinese community in the Valley. The publication Phoenix International has stories in English and in Chinese written in the complex characters used in Hong Kong and Taiwan. In contrast, the magazine Shang is in the simplified characters used on the Mainland.

The print advertising is mainly to create awareness of his stores, Arizmendi says.  His name and phone number are at the bottom of the advertisements because Chinese customers like to deal with the top person, he says. Word of mouth is powerful. “The most important thing is we have a great reputation among the Chinese community,” he says.

With the Hing Wa Lee Jewelers, Rusnak Auto Group recently began co-sponsoring a “Cars and Coffee” event at the Rose Bowl in Pasadena. The first event featured 215 cars including 20 Lamborghinis. Seventy percent of the attendees were Chinese.

“Often there is the same passion for cars as with watches,” says David S.K. Lee, CEO of the Hing Wa Lee Group, which also deals in vintage Ferraris and publishes Phoenix International.

More than half of his business comes from Chinese customers who skew between 30 and 40 years old. “The trend we are seeing is a lot of newcomers, with fresh passports and millions of dollars in cash,” says Umutyan.

Rusnak Porsche advertises in the World Journal, but its primary marketing is digital. The Rusnak organization is working on a Chinese version of its website.

Adding Chinese staff has been his most effective business-development move, says Umutyan. His Porsche dealership has a Chinese sales manager and three Chinese salespersons.

Half the staff in nearly all the departments at the store is Chinese, as are 60% of his customers. The dealership has many walk-in customers who have been in the U.S. only a few weeks, he says. “They don’t have their California driver’s license yet,” says Beatt.

All the Rusnak stores have Chinese clients who pay in cash, but payments usually are wired.  Some pay with a debit card, such as the client who had just arrived in the U.S. and paid cash for a $2.8 million house and $550,000 Mercedes GL550, says William Ho, sales manager at Mercedes of Arcadia. He’s worked there for 20 years.

In order to cater to customers who want to make large purchases using a debit card, Mercedes of Arcadia has a special arrangement with China UnionPay, Ho says.

The Arcadia store has many long-term customers from Hong Kong, Taiwan and Mainland China.  To reach them, Beatt advertises in print and on TV and radio.  Reaching all prospective clients through just a few channels is impossible because they read different versions of Chinese characters and speak different dialects.

“There is not one TV station that reaches the entire Chinese community,” Beatt says.

It’s important for employees to know the differences among the various Chinese communities, says Ho, a Hong Kong native.  That ranges from knowing how they want to pay to dealing with assertive clients.

“If you treat them with respect and establish the relationship, you have a higher percentage of repeat customers,” Beatt says.

Those customers include a Chinese businessman who has purchased 15 cars in the past eight years at the Arcadia Mercedes dealership. “He gives them to his employees,” says Beatt.