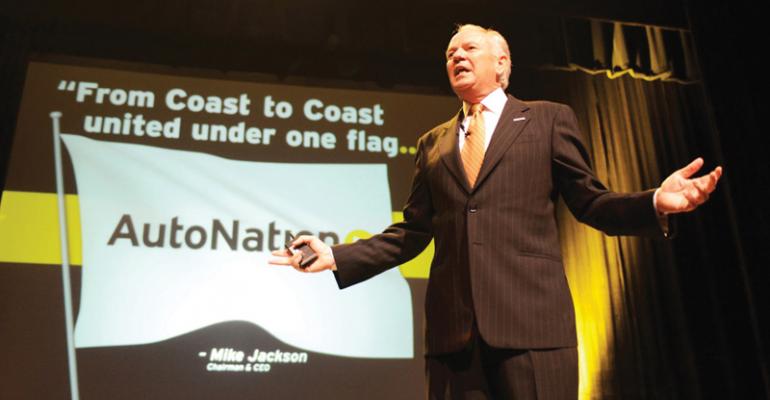 Michael Jackson tells why he sees 2013 as a banner year for his company and the auto industry in general.

AutoNation CEO Michael Jackson sees 2013 as a banner year for the Ft. Lauderdale, FL-based megadealer, and he doesn’t need to look far from home to feel that way.

“Florida was ground-zero for the meltdown of the housing industry,” says the head of the country’s largest dealership chain. “Now we are seeing stability. We don’t have to go back to the boom years. Just to the point of people knowing the rug won’t be pulled out from under them.”

Knowing that puts consumers in a car-buying mood, Jackson says. People who worry about falling home values typically lack the consumer confidence and financial equity to purchase a vehicle.

As a dealer, he also is heartened to see the U.S. building industry recovering from hard times. “All those construction sites we see today employ high-paid workers who need pickup trucks to get to those sites.”

Low interest rates and greater credit access are spurring car sales, he says, contrasting that to the credit freeze of four and five years ago. “The best financing is available today. In 2008 and 2009, I couldn’t get the Lord-above financed.”

Lenders back then ultimately learned automotive financing risks were less than other segments, Jackson says.

“They saw people paying their car loans first, before their mortgages, before their kids’ education,” he says. “Banks said, ‘Look at that car business. No one is losing money on loans.’ So they got back into it.”

Jackson describes pent-up demand as a main driver of recovering light-vehicle sales, which WardsAuto predicts will reach 15.8 million units this year. “Replacements are the power that cannot be stopped.”

Much of his energies currently are focused on a corporate project of renaming most of the megadealer’s stores under the name “AutoNation.” That eliminates AutoNation’s regional brand names such as Desert in Las Vegas and Maroone in Florida.

The project goes beyond merely re-christening stores. The goal is to establish coast-to-coast standards and processes. “You’ve got to hand it to us,” Jackson says at a recent J.D. Power and Associates conference. “No one has done this in the history of auto retail. And we’re not done.”

He self-effacingly refers to himself as “just a humble retailer.” That doesn’t stop him from leveling criticism at auto makers, particularly for their sins of the past.

“I never seemed to be able to get through to them that push production was destructive,” Jackson says in describing supplies outpacing demand because of overcapacity.

“Assembly plants had just-in-time delivery of parts, but once those parts were put together, they didn’t care if the cars sat unsold for months.” Since then, auto makers have reformed their ways to the point that “I’ve never seen better production-to-demand than I’m seeing today.”

Jackson takes a measured approach while weighing in on a hot topic of facility upgrades. Many auto makers want their dealers to build new stores that conform to a standard brand look.

The National Automobile Dealers Assn. claims some auto makers are going overboard with stringent specifications, such as precise tile shades and exact locations of reception desks.

“Dealers should properly represent manufacturers,” Jackson says. “That should be reflected in the quality of facilities. There should be brand identity.

“But when it gets down to dictating the color of toilet paper, you’re getting on my nerves.”