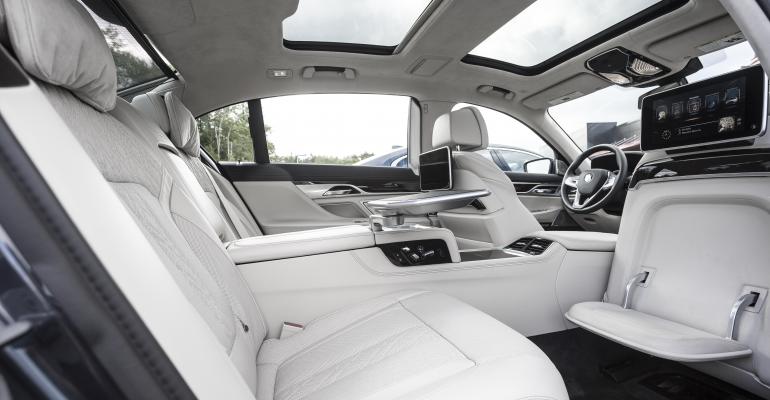 Sit Back, Relax and Enjoy the Car Interior

Advanced technologies would calm stressed drivers, rouse sleepy ones and overall make the car interior the place to be.&nbsp;

DETROIT – It’s a cruel world out there, but there’s a calming place to get away from it all: inside your car. It will get even better soon.

In development are seats with sensors that measure driver heart and respiration rates, as well as detect rate variability, stress levels and states of drowsiness.

“We’re concerned about waking someone up if they are tired and calming them down if they are stressed,” he says. “That is active-wellness 101, but you can get into so much else.”

Ways for the car interior to automatically relieve a stressed driver include providing a relaxing seat massage, lowering the cabin temperature and playing comforting music on the car’s audio system, he says.

With the advent of self-driving cars, the issue of motion sickness may become more acute. “In autonomous vehicles, we’d be taking away the one thing that mitigates motion sickness – driving,” Hotary says.

Faurecia R&D is focusing on what exactly causes motion sickness, how can a vehicle sense an occupant is suffering from it and how interior redesigning can mitigate it. “This is a big deal,” Hotary says.

How does a supplier redesign a car interior, especially an autonomous-car interior, to allay motion sickness among occupants? “That’s what we are trying to figure out right now,” Hotary tells WardsAuto.

“Most of it is currently proprietary, but I’ll give you a sneak peek,” he says. “It has to do with occupant positioning.”

One of them, called a connected jukebox, is a system in which multiple smartphones “talk to each other to create a master social playlist so people can experience audio in a new way,” Ludwig says.

Also in the works is “Voyager,” a portable music device, shaped somewhat like a computer tablet. “You can take it with you and also dock it inside the car,” Ludwig says. “It will particularly appeal to Millennials.”

Another Harman system in development would create individual sound zones in a car. Speakers would go in headrests and the ceiling. The setup would allow vehicle occupants to individually and privately do things such as conduct phone conversations and listen to music without using headsets. Moreover, only the driver would hear a navigation system’s audible directions.

An impending system that replicates the sound of famous concert halls would produce music “that makes the car interior acoustically feel like a much bigger space,” Ludwig says.

Like any automotive supplier, Harman faces its share of challenges and competitive issues. But it has this going for it: “Everyone loves music,” Ludwig says.

Coffee, Denim-Based Composites Could Be Visible In Your Next Interior
May 11, 2016