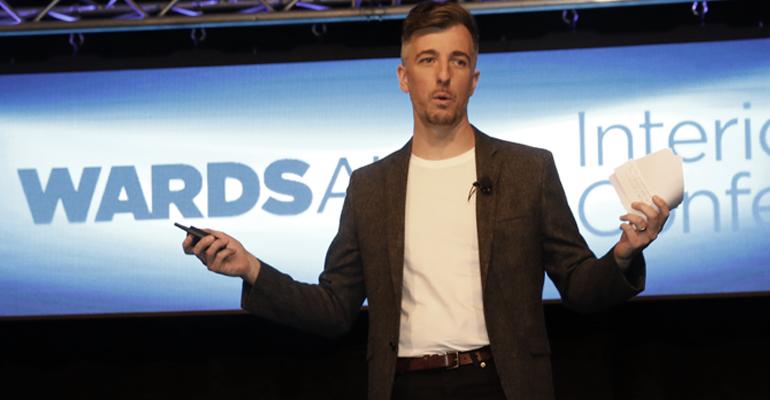 Sartorello: “Doing things that are driving us to be better human-centric designers.”
Vehicles>WardsAuto Interiors Conference

NOVI, MI – Ford is working hard to put real people – fully fleshed and three-dimensional – at the center of its future interior designs.

Leading the charge is Dennis Sartorello, chief designer-Global Strategic Design, who has spent the past five years driving a cultural revolution inside the design studio, targeted at creating more user-friendly vehicles that better connect emotionally with buyers.

Speaking here at the WardsAuto Interiors Conference, Sartorello says the goal is to stop viewing drivers and passengers as two-dimensional data points and see them more as living, breathing people who are reshaping the definition of mobility.

To achieve that, Sartorello and his team have been tearing up the playbook on interior design to foster a new environment inside the studio that promotes free thinking, experimental play and better communication with the outside world.

“We’re doing things that are driving us to be better human-centric designers,” he says.

The team is encouraged to find inspiration from interactions throughout their daily lives and share those impressions with others when they enter the studio. “There are no filters; look for clues everywhere,” Sartorello says.

The goal isn’t to discover the next innovation, he suggests, but to develop holistic designs that work better for the customer. “We’re not necessarily looking for new features to add,” he says.

“We need more than clay models,” Sartorello says. “We’re turning everything into an activity for the (executive) leadership and designers when they come into the studio.

Designers are getting out in the field to see how consumers act in Ford vehicles or to test concepts themselves, encouraged to “break the spaces and redraw on the fly,” Sartorello says. “We watch what (people) do and then work backward.”

Ford also is bringing customers into the studio, observing them as they play with vehicle simulators and react to futuristic concepts and sketches.

Sartorello’s department also is taking a second look at components and systems in current Ford vehicles, asking whether they would still design them the same way today if they were approaching the interior as a whole.

Changing the culture inside the design studio isn’t easy, he acknowledges.

“It sounds simple, and there’s nothing really new here,” he says. “But what’s different is how we’re doing these things in design. It takes discipline and effort to do this every day, every time you walk into the studio.

“My team constantly is helping me to course correct,” he adds. “(But) people seem to be responding well (to the new methodology).”