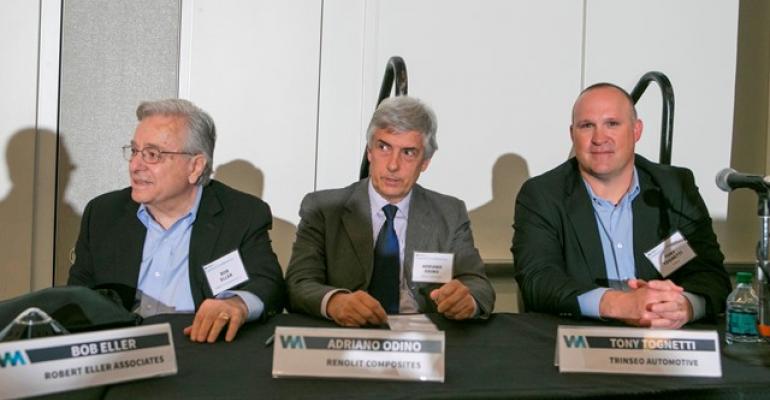 One expert sees automakers requiring interior materials be designed to withstand spills of a growing menu of foods, beyond ketchup and mustard. &ldquo;I think specs will change somewhat along with some very exotic-type chemical and food sources we will see,&rdquo; Rose Ryntz says.

“We can’t forget about the incorporation of electronics,” says Ryntz, who moderated the Material Innovations panel session. Interior surfaces can be embedded with sensors and switches and also can be translucent so they can be backlit for stylistic effect, she says, adding that another top priority for interior plastics needs to be durability, particularly as ride sharing gains popularity.

“We’ve talked about scratch and mar resistance for how many eons and we try to improve that,” she says. “But think about it, if I get in a taxi at least, which is kind of ride sharing, it has to be relatively clean. I don’t mean to the point of taking a hose and cleaning it out, but not absorbing the dirt and grime and scratches and all that to begin with.”

“As you go through different parts of the world, I think you’re going to see different requirements, not only based on chemical resistance but the way in which people expect to act. It might be appearance/scratch/mar resistance plus other attributes,” she says. “So I think specs will change somewhat along with some very exotic-type chemical and food sources we will see.”

Expert Robert Eller sees growth in plastics used as interior structural elements, such as cross-car beams made of direct long-fiber thermoplastic. The president of Robert Eller Associates also sees a “fundamental problem” in the inefficient way interior plastics are made.

“You have a surface material, usually foam, then a substrate, maybe a fourth layer,” he says. “If you have to put those in in four separate steps, you’re creating a lot of scrap and cost. Reducing process cost by reducing the number of steps” is a top priority for Eller.

The growing importance of soft-touch surfaces or “compressible haptics” also is a trend in vehicle-interior development, but one that is difficult to define.

“I think it’s important, but we don’t know how to quantify it. That’s always been a problem for soft-touch materials,” Eller says. “Everyone talks about achieving soft-touch so they’re aiming for it, and it seems to be a selling point.”

But even plastics that are not “soft-touch” need to look and feel like them to some extent, says Tony Tognetti, technical service and development engineer at Trinseo.

“You want to make sure it’s not too tinny, too plastic-y, even though it’s plastic,” Tognetti says. “You want to make sure you have the right impact properties of the material, so it doesn’t resonate sound and it has a nice feel, so you feel like you’re in a luxurious interior rather than a tinker toy.”

Trinseo’s low-gloss polymer options, such as Pulse GX50, GX70 and GX90 polycarbonate/ABS blends, are in the market now. GX50 is used in the groundbreaking BMW i3 electric vehicle for unpainted parts such as the A-pillar, doorsill, mid-console side panels, glovebox door inner and luggage compartment trim. The Pulse products also are used in the Audi Q5 and BMW 1-Series and i8.

Sometimes, there is no substitute for expensive, premium materials such as leather. Eller urges conference attendees to slide behind the wheel of the dramatic Lexus LC 500 coupe on display at the conference as a 2017 Wards 10 Best Interiors winner.

“Look at the Lexus up there if you want to feel soft-touch – it’s just beautiful,” he says. “That’s achieved with leather, so leather is a target for the skin companies. Some of them are achieving leather-like grain and touch with, believe it or not, TPOs (thermoplastic olefins), which is a great technical achievement.”

Its newest product is NATGOR, a multi-layer composite using polyolefin and natural fibers such as jute, kenaf and flax, says Adriano Odino, technical director of Renolit Composites. The material can be integrated with textiles or films applied to the finish surface.

NATGOR can be cut to any length, exhibits medium-high stiffness, resists impacts well, requires no glue, has excellent formability, is 20% recyclable and lightweight and makes for optimized shipping, Odino says.

The future of topcoating for plastics appears to be in question, and not only because of the persistent problem with sunscreen or the challenge of blue-jean denim leaving stains on seats, Eller says.

Ryntz says plastics developers are experimenting with antimicrobial agents placed in vehicle heating ventilation ducts to prevent condensation. “You can put the same antimicrobial agents in topcoats. There are advances in that, but I think people are trying to eliminate the topcoat because of what Bob and Tony and others have said: It adds another process step, and it becomes more expensive.”

Some colors maybe camouflage long-term wear of plastic interior surfaces, and it’s important that the studio designing the vehicle take into consideration what type of plastic will be used, Tognetti says.

“You have to decide what type of grain you want and look at the color…and long-term wear and durability,” he says. “There are additives for colorant packages to improve scratch and mar resistance. That’s one of our products.”

Gesture Control One Path to Simpler Interiors
May 12, 2016