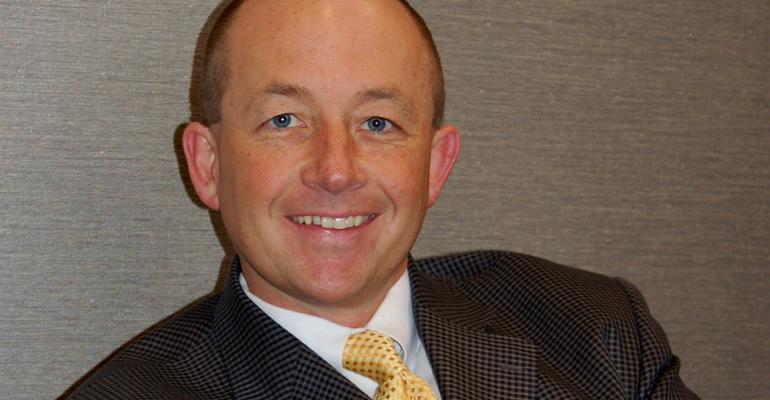 &ldquo;Every day, every month, every year, we move farther into the digital world,&rdquo; says Shaun Kniffin of the Germain dealership group.

When Seth Berkowitz, president of online automotive research portal Edmunds.com, met with a major franchise dealer in San Francisco, he was greeted with a shocking glimpse into what the future of automotive retailing may hold.

“My store has become meaningless; it’s just a place that houses my employees,” the dealer told Berkowitz. “It could just as well be a warehouse.”

The dealer, whom Berkowitz didn’t identify, said his commercial presence today is digital, even more so than the actual buildings that still house his fixed operations and other management functions. The digital space is where his business’s “true essence” is to be found, he said.

While most dealers likely would reject such a radical shift in business models, sales today are being increasingly driven by tech-savvy consumers wielding mobile devices, apps and a new shopping mindset.

“When today’s consumers, especially Gen Y buyers, are surveyed, they clearly say that given a choice, they’d rather have less physical interaction with the dealership in the car-buying process,” says Dale Pollack, founder of vAuto, an inventory-management firm. “These are kids who have grown up in the Internet age, and buying things online is the norm.”

“There was significantly more interest for all of these things for folks under 55, so that may indicate it is the wave of the future,” says Nancy Walter, Foresight vice president-business development.

“We hold the philosophy that we are a digital business,” says Shaun Kniffin, marketing director at the Germain Motor, a dealership group based in Columbus, OH. “Every day, every month, every year, we move farther into the digital world. Our discussions, our budgets and our strategies are almost entirely about the digital space now. We are digital retailers.”

“Our digital strategy includes, but is not limited to, AutoTrader.com, Cars.com, TrueCar, HookLogic, BlackBook Online, search-engine marketing and optimization and social media,” Kniffin says. “It takes all of those to keep our nameplates and inventory out in the market.”

Germain spends an average of $40,000 per store per month, up to 80% of its total marketing budget, to maintain its presence on the Internet. In turn, its Web channels account for two-thirds of its business.

Germain’s digital advertising is weighted fairly evenly between its Florida stores and those in Michigan and Ohio. The company buys TV and radio spots more in Florida, where traditional ad spending can be as high as 55%, compared with only 11% to 30% in Michigan and Ohio.

“We haven’t bought print advertising in Ohio since 2008,” Kniffin says.

When Germain first launched its Internet department it tried a centralized approach, but later found the culture and market of each store was unique. The processes had to be adapted to each location. 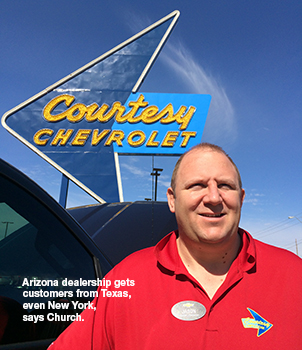 “Ninety days into it we said this is easier said than done,” Kniffin says. “The autonomy has to rest at the store level. If those people don’t own the process, it’s not going to work.”

Faced with multiple online sources that take the mystery out of prices and the perception in buyers’ minds that there are no bad vehicles, Germain chose online video as a way to stand out.

“There’s so much information out there about the cars that it’s a bit confusing, so we started a series of two-and-a-half minute videos built into our dealership websites,” Kniffin says. “They explain what you can expect from start to finish, what the negotiation is like and what the delivery is like.

“We interview customers driving their new cars so the customer becomes the salesperson. It’s not a ‘buy today’ or a payment message; it’s more like ‘Here’s why this makes sense.’”

Kniffin says a great customer experience no longer is just a warm and friendly greeting at the door or a cup of coffee. Instead, it’s the online experience. “If our site is slow, cumbersome or doesn’t give them what they want, they’re gone,” he says.

“More than anything else, customers want speed, accurate information, price, a real picture of the car and a compelling description along with positive customer reviews. It’s like shopping on Amazon. We’re all online shoppers, we do it intuitively. We have to put the mirror in front of ourselves and say ‘OK, this is what we have to do.’”

"Be Where Customer Is"

Eighty-five percent of the customer base at Courtesy Chevrolet in Phoenix spends time on the Internet and website leads accounted for 1,921, or about 50%, of total 2013 sales.

Church, a native of South Africa who also has lived in the U.K., says Courtesy depends on multiple websites to help manage the dealership’s reputation and attract leads.

“Many dealers focus on one or two reputation-management sites,” Church says. “We need to be where the customer is, so we have a broad-scale approach. If you Googled ‘reviews’ for Courtesy Chevrolet, you would see many different positive comments on many different sites. That’s what our customers are looking for.”

Of all the sites he uses, Yelp is the most difficult place for dealerships to earn positive reviews, largely because “Yelpers” are very analytical and pride themselves on robust feedback, he says. But that hasn’t stopped Church from making the best of the situation.

“We get calls from people saying they read our reviews and want us to fix a problem another dealer couldn’t handle,” he says. “I don’t know of a dealership that has gotten 5-star reviews with Yelp, but it’s still a channel of communication with the customer and we relish that.”

Positive online reviews have attracted customers from Texas and beyond. “We had one customer from New York City who preferred to have the vehicle shipped all the way from Phoenix because of our reviews and the particular salesperson,” Church says. “Obviously we’re not going to pick up the service-department business.”

Courtesy tries to put as much information online as possible, “so we’re not playing the game of hide the price or hide the invoice,” he says. “Most Internet salespeople are restricted, but our staff is empowered. If a customer wants a lease quote, they’re told to go to the lease manager.

“We try to give as many tools as possible to the Internet sales representatives so that they can be an instantaneous source of information. The old world of a line of salesmen waiting for five seconds of the lease manager’s time to get a bit of information to answer a consumer’s question is gone.”

The company has an advertising/marketing budget of $4.8 million per year, 50% of which is allocated to Web activities.

“We have a presence on Facebook, Twitter, You Tube, Blogger and Google +,” says Internet Director Lori Hammond. “We tweet, some people re-tweet, but not a lot. I’m not sure what Twitter’s doing for us.”

All leads from the Conicelli website or third-party websites funnel into the business development center where sales assistants work with the sales staff.

“Since the age of the Internet has exploded here, we have longer arms to reach people,” says Mike Hammond, Conicelli’s vice president-sales and marketing and husband of Lori, whose father founded the dealership group. 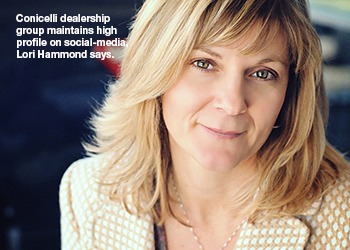 “Where we would normally sell to customers within an eight- to 10-mile (13- to 16-km) radius, now we’re reaching people 20 miles (32 km) away because of the Internet. Retaining those people isn’t so easy, because there are dealers a lot closer to them. So we have to provide services that others don’t offer – good incentive programs, good lease programs.”

Conicelli recently combined its data-mining and Internet departments. The dealership uses the DealerSocket customer-relationship management software tool to track existing traditional and Internet customers who may be in a position to consider a new vehicle.

“We determine which customers are ‘hot’ and then we track them like we track our normal leads,” says Mike Hammond. “We get about 80 opportunities a day from data mining and we close about 10%-11% of those. With 80 leads you sell six or eight a day. Ten percent is not such a bad thing.”

The Conicelli website contains customer reviews, coupons for service specials and a quick-credit application. If customers don’t know how to text the dealership to sign up for incentive notices and contests, a video will show them how.

Getting Aggressive in Nevada

“We weren’t being as aggressive with our pricing and we weren’t putting as much money into the spend and we didn’t have the coverage that’s necessary if you’re going to do volume,” says Internet Director Rick Glenn.

But a change in philosophy that led to a more aggressive search-engine-optimization strategy landed the dealership in first place in the region in 2013 and membership in Toyota’s elite President’s Cabinet.

With total Internet sales of 3,124 vehicles, Findlay claims the No.20 slot on the WardsAuto e-Dealer 100, marking its first appearance on the list.

“I noticed a few dealers we were studying that were doing increasingly well in terms of volume were heavily invested in SEO,” Glenn says. “We asked to go see a couple of the ones that had been beating us and they said, ‘No, you can’t come in,’ which motivated us a little bit more to find out what was going on.

“I told our owner what the Internet departments were doing for other dealers and presented him with a plan and he said, ‘Congratulations, you’re now the Internet Director.’

Overall sales have increased because the aggressive nature of the Internet department has rubbed off on the showroom floor, Glenn says.

He uses third-party lead generators, but most of his market spending goes to SEO with Google.

“You place the right ad in the right location, buy key words like ‘new car’ or ‘Toyota,’ and it finds people. Once you find them, you put a tracer on them that follows them around the Web. If they’ve looked up Toyota, every time they go on the Internet, we follow them around.

Some dealers won’t embrace Findlay Toyota’s philosophy, Glenn acknowledges. “You’ve got AutoNation just up the street,” he says. “They will not duplicate our system because they refuse to be as aggressive as we are in terms of price transparency. Basically you’re increasing your volume, which is helping your service department, but also adds staffing costs. The expense of 200 more cars a month in some peoples’ minds does not pencil. But if you look at our bottom line, I think it is penciling.

“To be truly aggressive on the Internet your owner needs to have the philosophy of, ‘I want to sell the most cars,’ not ‘I want to make the most money.’ Sometimes it’s two in the same, sometimes it’s not. But the endgame is, you’re always going to have a service department full of people and a very efficient crew because we’re constantly working deals.”

E-commerce holds a promise of the future for dealers, but for many of them “it is quite threatening because it allows the consumer much more power and leverage than they have in the physical realm,” says vAuto’s Pollack.

“Dealerships have traditionally been about controlling the customer and the deal. Contrary to that, I see e-commerce as the dealer’s salvation.

“As new-car margins continue to shrink, dealers have to find ways to sell and deliver cars to customers at a lower cost. There are only so many ways to cut costs out of the conventional way of doing business, and e-commerce is exactly what that is.”