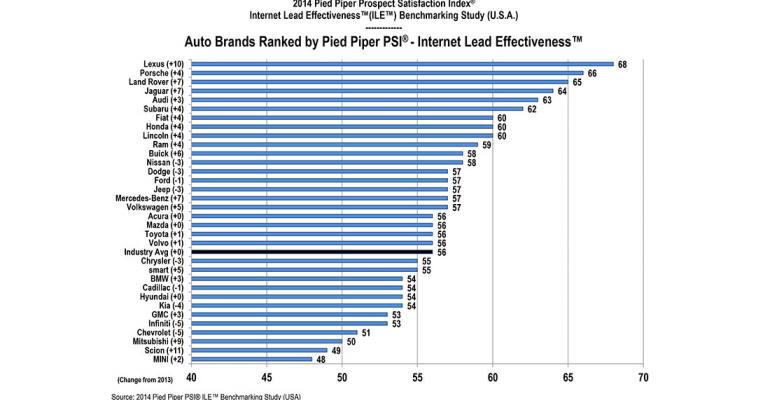 <p><strong>Chart shows how dealerships did as a group by brand. Numbers in parentheses indicate year-over-year improvements or declines.</strong></p>
Dealers>2015 WardsAuto e-Dealer 100

In a perfect world, every dealership would act on every Internet lead, responding quickly and following all the right steps leading to a sale.

Some individual dealers currently do all that all the time, and their high Internet-related sales serve as evidence.

But when it comes to groups of dealers representing particular auto brands, it’s an imperfect world, according to a Pied Piper annual mystery-shopping study measuring dealership responsiveness to customer online inquiries.

At the top of the index are Lexus, Porsche and Land Rover dealerships with lead effectiveness of 68, 66 and 65, respectively. One hundred is a perfect score.

At the bottom of the list are Mitsubishi, Scion and Mini, respectively scoring 50, 49 and 48. The industry average is 56.

“By brand, I don’t think we’ll ever see 100, but hopefully we’ll see brands in the 70s in another five years or so,” Pied Piper Management CEO Fran O’Hagan tells WardsAuto.

Twenty-one of 33 brands recorded higher scores in 2014. Two brands, Lexus and Subaru, have occupied spots in the top one-third of the rankings since they began in 2011.

In addition to the three leaders, other luxury brands in the top 10 are Jaguar, Audi and Lincoln. But the premium marques of BMW, Cadillac and Infiniti scored below the industry average.

But BMW dealers are getting better at it, O’Hagan says. “BMW has shown consistent improvement. Infiniti is just the opposite.”

Much of the mystery shopping scores dealerships on how quickly they reply to email inquiries asking a simple yet specific question an auto-responder can’t answer.

Quickness and effectiveness of responses is important because dealers who do it well typically sell more cars, O’Hagan says.

Based on the inactions of some dealerships, you wouldn’t know that. In the study, every 14th customer Internet inquiry, on average 7%, received no response at all, not even an automated email.

On average, online customer inquiries received a dealership response within 30 minutes less than 50% of the time.

Most dealerships with effective Internet sales processes reply immediately by email, but also try to contact the customer by telephone. Three years ago, fewer than 50% did both of those things. Today, 64% do, according to the latest study.

“It’s very unusual to find a dealership that is good at the process if calling on the phone isn’t an integral step,” O’Hagan says. “If you can’t have them at the store, the next best thing is talking to them on the phone. It’s far better and much more personal than emailing back and forth.”

Some dealership salespeople hesitate to make that call, fearing the online customer will perceive it as a hard-sell tactic.

Nor should it be, O’Hagan says. “You shouldn’t get on the phone and immediately try to sell a car to this person who makes an inquiry through your website, any more than you would pounce on them and try to sell them a car as soon as they walk into the dealership. Your first step is building rapport.”

The study measured 37 combinations of dealership replies relying on automated and personal responses. The most common dealership reply includes an automated response, followed by a non-customized salesperson template email, in effect an e-form letter.

The latest Pied Piper Internet lead effectiveness study was conducted between September and March by submitting online inquiries to a sample of 14,656 dealerships nationwide representing all major brands.