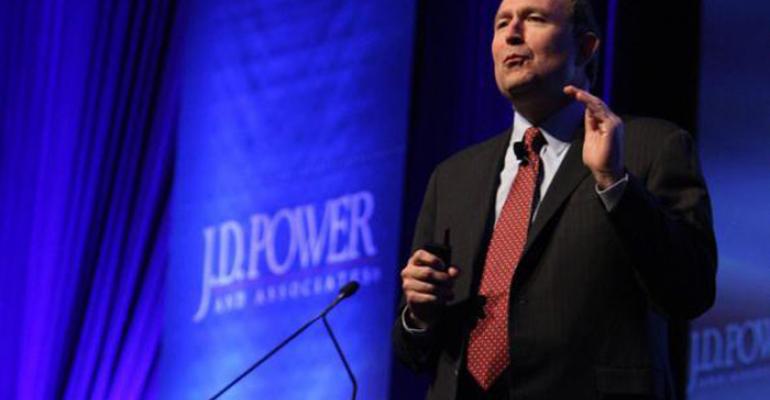 <p> <strong>&ldquo;It has reached a point where it is financially wise to separate the Internet portion of our total business,&rdquo; Group 1&rsquo;s Hesterberg says. </strong></p>
Dealers>2015 WardsAuto e-Dealer 100

Top performers on the WardsAuto e-Dealer 100 show why they&rsquo;re all-stars.

Dealers who excel at Internet sales are increasing their playing time and sharpening their e-commerce skills in a growing part of auto retailing.

Among the top finishers on the WardsAuto e-Dealer 100 is the Conicelli Autoplex group, a multi-franchise family business in Conshohocken, PA. It boosted its Internet-related sales to 5,164 new and used units in 2011, up from 4,538 the year before.

“We have maintained steady growth in Internet sales,” says Lori Hammond, Conicelli’s part-owner and Internet director. “The role of the Internet has become a key element in our sales strategizing. It is a factor in selling the premium brands, plus accessories on all brands and maintenance programs.”

Founded by her father Dominic Conicelli as an auto auction in 1963, the Conicelli dealerships, west of Philadelphia, follow a formula with an Internet team of 12 full-time employees.

“Our team is trained and retrained in lead acquisition and follow-up,” Hammond says. “But overriding the sales numbers are stronger customer loyalty and employee retention.”

Conicelli brands include Honda, Toyota, Nissan and Hyundai in Conshohocken and a second Toyota store in Springfield, PA.

“It has reached a point where it is financially wise to separate the Internet portion of our total business,” says Group 1 CEO Earl Hesterberg. “We see this trend developing at other dealership groups our size.”

Sid DeBoer, CEO of publicly owned Lithia Motors, based in Medford, OR, says: “Selling the old-fashioned way still will prevail for some time to come, but I can see Internet sales being spun off, and such things as grosses, margins and compensation being affected as the Internet weaves its way into every dealer's selling process.

“The e-literate kids these days would like nothing better than to be dealing with Internet departments at the dealerships.”

The Ed Morse Group, a regular on the WardsAuto e-Dealer 100, sold 4,594 vehicles through its Internet unit.

“We're excited to be one of the first groups to establish an e-division,” says Edward J. Morse, co-owner of the dealership group based in Delray Beach, FL. “It's another example of how the Internet is changing the auto retail world.”

Co-owned by Mike Brosin and the Van Tuyl Group, Crest hired Partin away from a Dallas Toyota store on the basis of his skills in developing online business. He previously had handled Internet sales for dealerships in Atlanta and CarMax stores in Texas, and is deeply involved in the development of websites at Crest as a source of leads.

“Our landing page links to each of the websites,” Partin says. “In addition, we can access the Van Tuyl Group marketing team, which covers all our SEO (search-engine optimization) to drive traffic to our websites.”

Although some people tout the value of microsites offering specific brand content and such, Partin says he’s not a big user of them. “I like to see all my analytics for each of our websites coming from those websites, not multiple microsites.”

In other online initiatives, “Crest has completely gone to a mobile site for spending its SEO and SEM (search-engine marketing) funds,” he says. “We have iPhone, Android and BlackBerry apps for inventory and specials.”

To close leads, Crest distributes them to its general sales team, rather than to designated Internet staffers. But to get Internet leads, salespeople must prove themselves on the showroom floor first.

Partin and Crest General Manager Mike Brosin last year reached a goal of selling more than 200 Internet units a month and nearing a close ratio of more than 20%.

“You have to constantly pursue beating yourself every day,” Brosin says. “Our strategy is working successfully as we move our way up the WardsAuto e-Dealer 100 ladder.”

John Eagle, a determined second-generation dealer has landed two Texas dealerships on the WardsAuto e-Dealer 100. They are John Eagle Honda of Houston with Internet-related sales of 2,080 vehicles and John Eagle Sport City Toyota with sales of 1,582 units last year.

Eagle is the son of a former Dallas dealer who lost his Lincoln-Mercury store to bankruptcy in 1970 but came back strong as a Honda and Toyota retailer.

Since then, the Eagle group has expanded to three Honda and two Toyota stores, as well as outlets for Acura, Mazda, Aston Martin, Bentley, Lotus and Rolls Royce brands in Texas.

“We have grown thanks to the influence of the Internet on premium and import sales,” says the younger Eagle, who started working at his father’s dealership at age six and became a dealer at 19.

But he warns of radical changes in car sales methods in the next few years and the way dealerships are formed. “It really has become too expensive,” he says.

The Eagle dealerships all are run by partners of John Eagle. The network has been aided in its Internet approach by increased use of videos and social networking.

He foresees Internet-driven sales increasing as sales floors get smaller. “Why do we have big showrooms when everything can be done on the computer?”

“We saw the potential in the 1990s,” says co-owner Steve Germain. “Columbus is a university center as well as the state capital, and we found a computer whiz, Shaun Kniffin, to shepherd our Internet growth in concert with the fast-developing youth market.”

Kniffin sold Steve and Rick Germain on a long-range approach to building up Internet sales. “The Germains were intent on coupling Internet leads with walk-in or phone leads as the key to growing sales,” he says.

Two decades ago, it was a risky move, but the 18-store group discovered “that the Internet stimulates business,” he says. “What's more, the Internet has lifted luxury-brand sales as no other force in the Germains’ experience of 65 years as dealers.”

Kniffin, as an online pioneer, sees nothing but growth in using the Internet to sell new and used cars, especially luxury vehicles. “Germain has shown the way.”

Perennially high on the WardsAuto e-Dealer 100 is Dave Smith Motors in Kellogg, ID. It is a relatively remote location but dealer principal Ken Smith uses the Internet to expand his reach well beyond his dealership complex’s geographical market. Its Internet-related sales totaled 6,822 last year.

Smith maintains strong Internet results by assigning 75 salespersons to online sales. More than 200 Internet sales a year are consummated by a 10-year Dave Smith salesman, Billy Holland, who has made online collecting and closing of leads in the mountain West far from a metro market into a science.

Dave Smith Motors, owned by brothers Ken and Eric Smith, has confined its new-vehicle franchises to General Motors and Chrysler brands, although it offers all brands on its used-car lot.

“We experienced an upturn last year and now are selling at higher levels,” Ken Smith says.

He decided to compete early on by creating a sales center for the Pacific Northwest. His average inventory is 750 vehicles, far larger than that of dealers in nearby markets. Eighty percent of sales are Chevrolet, GMC and Ram trucks.

Stung by a Cadillac non-renewal notice in 2009 as GM cut its franchise total, Dave Smith Motors relied on its many Cadillac customers to persuade GM to restore the franchise.

“They thought Kellogg was too small for a Cadillac franchise, only to be bombarded by complaints from all our Caddy owners,” says Eric Smith.