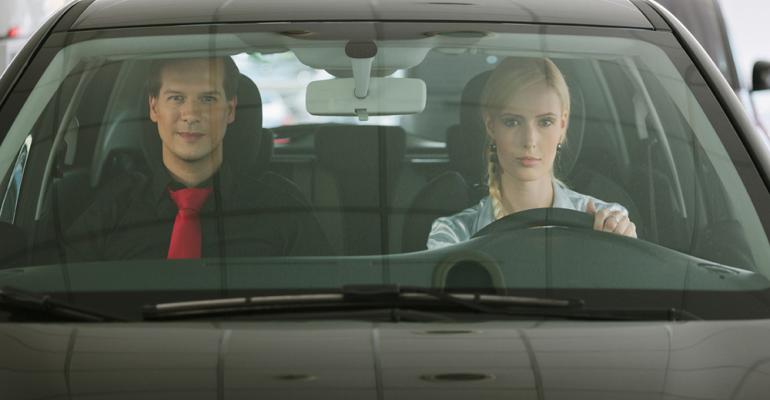 Traditional sales training stresses the importance of demo drives, but buyers take fewer of them, according to a new study.

Car buyers apparently are taking fewer test drives, long considered one of the most important parts of the dealership selling process.

A DMEautomotive survey of about 2,000 automotive consumers indicates 16% took no test drive. About one-third demo drove only one car.

Traditional sales training urges salespeople to put customers behind the wheel of a vehicle for a spin as a way of enhancing the close of a deal.

Not only are more people bypassing test drives, they’re making markedly fewer visits to dealerships, according to DME, a research and marketing firm.

More than two-thirds of car shoppers visited two dealerships or fewer before buying, according to the survey. Forty percent say they visited only one.

That contrasts to pre-Internet days when making the rounds of dealerships was how most people shopped for cars. Today, only 15% of buyers visit four or more stores.

“This avoidance of physical dealerships is in stark contrast with how much online vehicle research is happening,” says Mary Sheridan, DME’s manager-research and analytics. “Four in five people now use the Internet for car buying, visiting 10 auto websites in the process.”

Some aggressive Internet users take a tactical approach that resembles a form of warfare.

“More people are stealthily comparison-shopping dealerships and inventory online, and then swooping in to buy when their minds are made up,” Sheridan says.

Dealerships no longer can rely on walk-ins and “be-backs” to drive sales.

“They need to have the most powerful online presence wherever dealer and vehicle selection is happening, and work far harder to keep customers close throughout the ownership cycle, using every retention marketing tool possible, like a constant-connection mobile app,” she says.
The average new vehicle costs more than $30,000, but about half of surveyed new-car buyers test drove only one. Some of them skipped it altogether. On average, buyers test-drove 1.9 cars, with 26% trying out three or more, DME says.
Surprisingly similar patterns are seen among used-car buyers, of all people. Conventional wisdom is they would take significantly more test drives to check on a pre-owned car’s condition.

But the DME study says 30% of used-car buyers test drove only one vehicle compared with 35% of new-car buyers. And more used-car buyers (18%) than new-car purchasers (14%) took no test drives.
The survey says test drives appeal more to consumers under age 35. DME speculates that’s because they’re more enthralled with the novelty of buying a car.

Women influence 85% of all car purchases, but 19% of them skipped test drives. Twelve percent of men did.
The survey also measured how much consumers trust dealership salespeople. DME says the results are sobering: only 21% of people polled perceive showroom staffers as “trustworthy.”