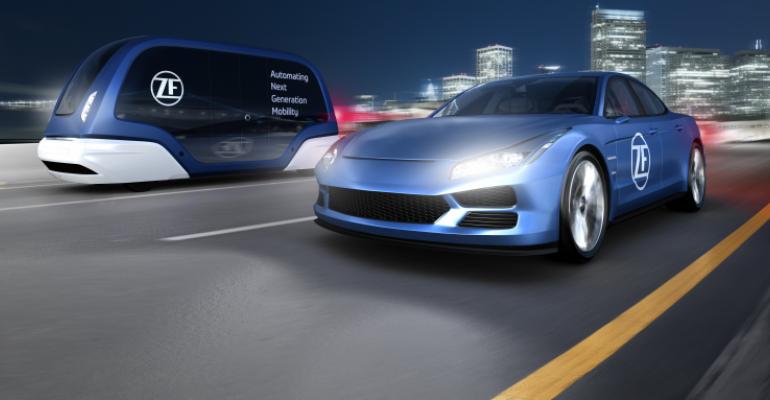 German supplier ZF steps up its partnerships in the mobility space, announcing plans with VinFast to launch Level 2+ driver-assistance technologies on battery-electric SUVs this year, while reporting heavy interest in the U.S. for autonomous shuttles already available through ZF’s cooperation with Oceaneering.

A growing BEV manufacturer founded in 2017 in Vietnam, VinFast is preparing to launch its VF e35 and VF e36 SUVs, with pre-orders offered globally within the next six months.

Initially, ZF will supply these vehicles with multiple cameras, radars and lidar sensors, central controller (pictured below, left) and the intelligent fusion of the sensors to deliver Level 2+ automated driving and parking functions. 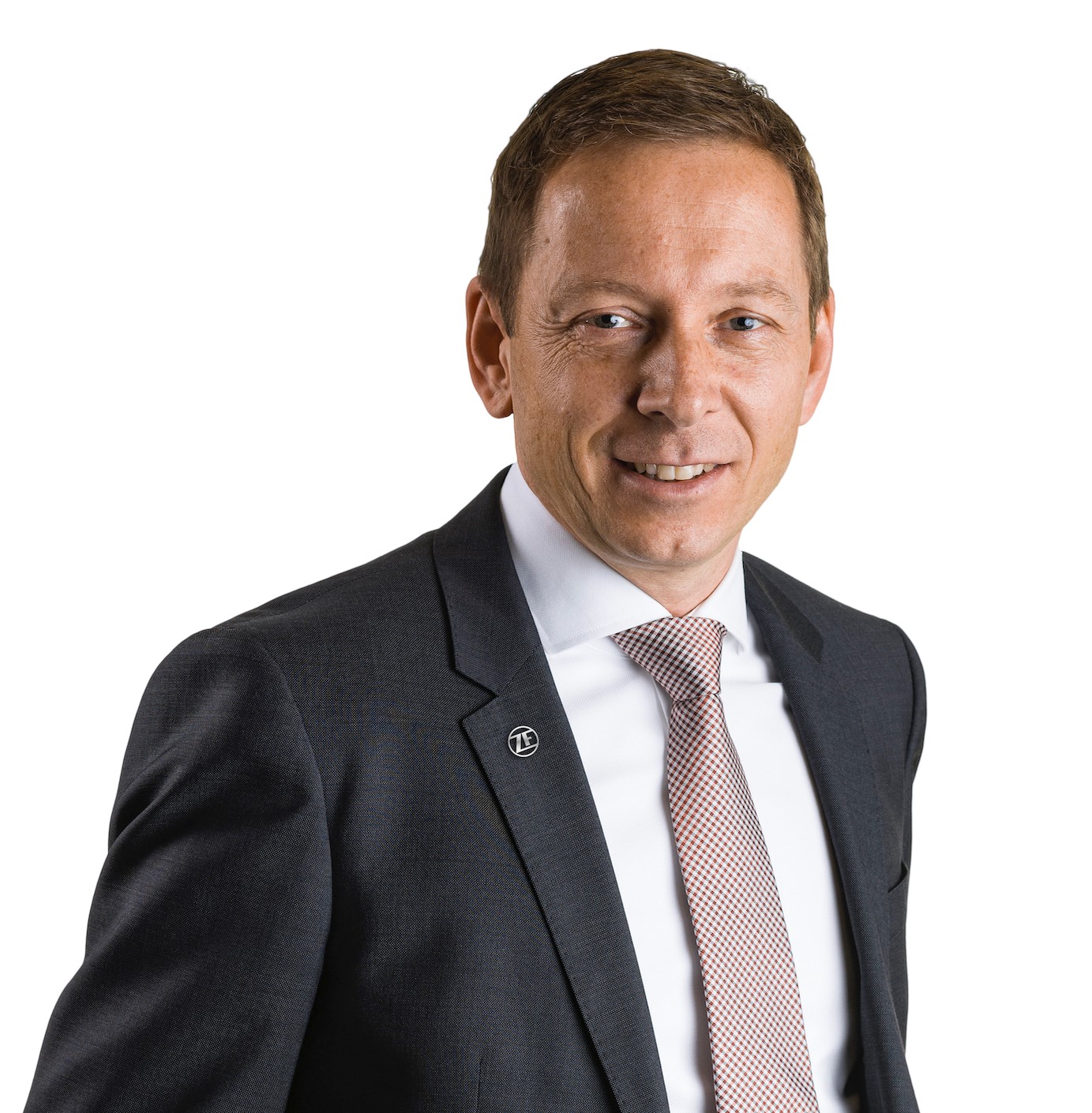 Beyond this initial launch, ZF and VinFast say they will continue collaborating on Level 3 and even Level 4 systems to include sophisticated sensor sets and central controllers to enable higher automated functionality for urban, highway and parking scenarios.

That would include development of Traffic Jam Pilot, Highway Driving Chauffeur and Automated Valet Parking, which is intended to rely on vehicle sensors to operate rather than pre-mapped and instrumented parking structures.

“Elevating the capabilities of all forms of mobility is our goal,” says ZF Board of Management Member Martin Fischer (pictured, left) in announcing the VinFast collaboration in a virtual briefing during 2022 CES.

“The design and development of higher-level autonomous-driving systems will assist drivers all over the world in enjoying enhanced degrees of safety, convenience and intelligence. This is our vision when we talk about The Next Generation of Mobility,” Fischer says.

While ZF’s product news with VinFast involves driver-assistance technology, the supplier already supports the startup automaker with transmissions and powertrain technology. ZF opened a plant in Vietnam in 2019 for supplying chassis modules to VinFast.

In the autonomous shuttle space, ZF two years ago acquired a 60% stake in 2GetThere, a mobility company founded in the Netherlands and which has been operating autonomous shuttles for passengers and cargo at airports, business parks and residential developments in Europe, Asia and the Middle East.

At the Rivium business park in Rotterdam, 2GetThere shuttles have been moving thousands of passengers daily for more than 15 years. ZF says the push now is to win contracts for these shuttles as new airports and industrial complexes are built, so the necessary sensors can be placed as roadway concrete is poured.

The shuttles are equipped with ultrasonic sensors and two solid-state bi-directional lidar sensors for use in segregated lanes on a fixed route.

The sensors communicate with magnetic elements that are about the size of a C-cell battery and are placed below the road surface about 13 ft. (4 m) apart. The vehicles are programmed to stay within 4 ins. (10 cm) of the magnetic elements along the route. 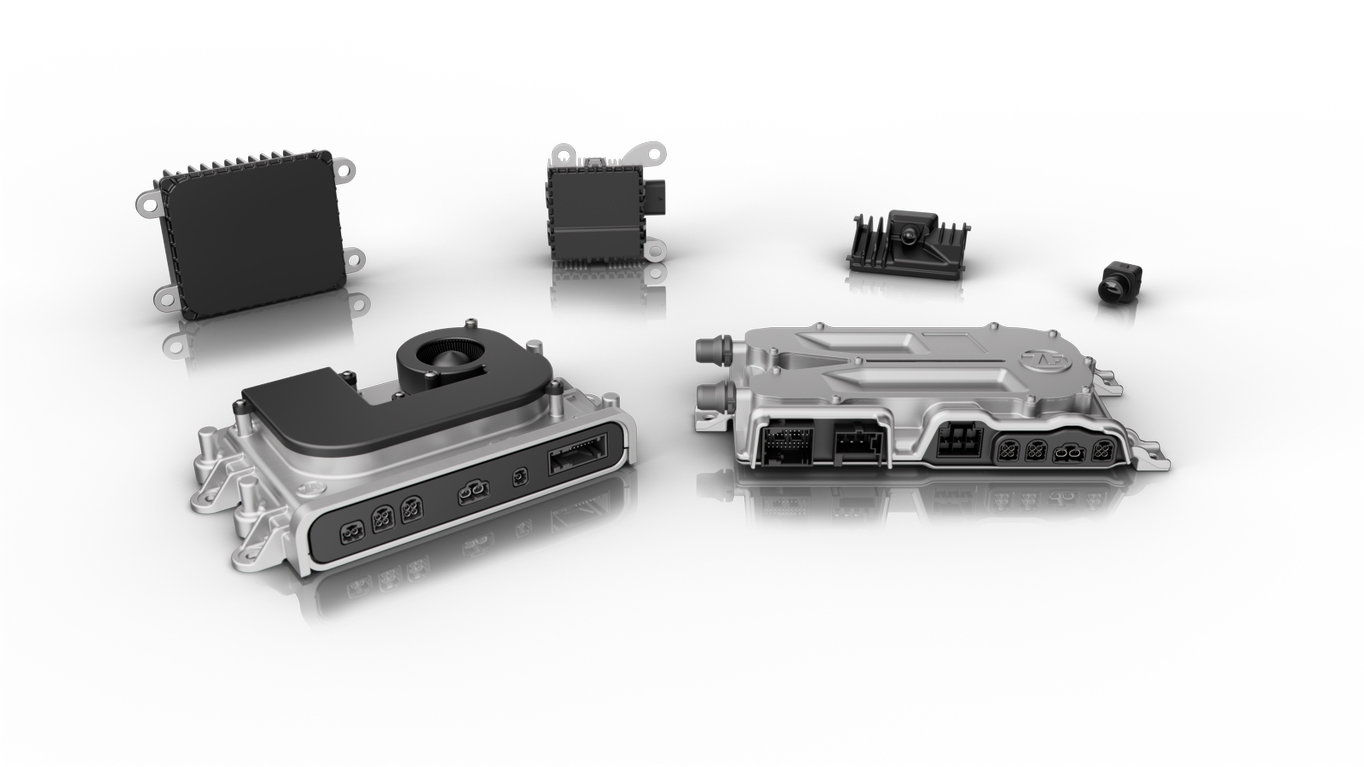 These Group Rapid Transport autonomous shuttles have room for 22 passengers, are all-electric and are designed for geo-fenced areas. ZF engineers are working on versions that can run for more than 5 miles (8 km) between stops.

Torsten Gollewski, ZF’s executive vice president-Advanced Development & Autonomous Mobility Systems, describes interest in long-distance autonomous shuttles in the U.S. as “huge,” and that ZF and mobility partner Oceaneering have working prototype shuttles that are being used to demonstrate their capabilities for airport authorities.

“We see a dominant market for this in the U.S.,” Fischer says during today’s media briefing. “We thought it would be more suitable for Europe or Asia and its metro areas, but some of our forecasts show that more than a third of this market is going to North America.”

Finally, on the powertrain front, ZF says it is launching high-voltage silicon-carbide inverters for a production battery-electric vehicle this fall.

Harald Diess, ZF’s head of product line electronics for the E-Mobility Div., says the supplier’s strategy is to offer a highly flexible, modular solution that works with 400V or 800V architectures and can accommodate silicon-carbide or conventional silicon chips.

Other suppliers, including Bosch, BorgWarner and Magna, have discussed silicon-carbide inverter programs as well, but Fischer believes ZF has the advantage of investing heavily in this technology several years ago as conventional 8-speed automatic transmissions were converted to hybrid transmissions.

ZF executives say next-generation silicon-carbide inverters will arrive in 2024 or 2025.

The supplier also forecasts 40 million BEVs will be sold globally in 2030, balanced equally among all three major markets.