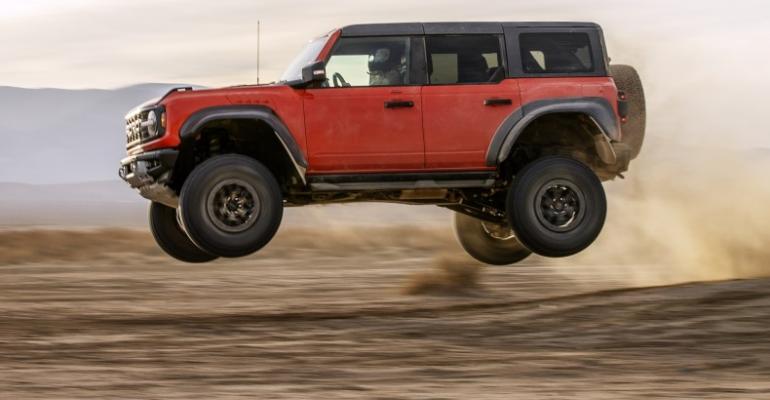 When A Regular Bronco Isn’t Enough

Ford Performance gives the Bronco the Raptor treatment. The ’22 model arrives in showrooms this summer, but buyers can place an order in March.

FENTON, MI – Amid a frozen tundra landscape made even colder by a bracing wind, Ford reveals its hottest new product, the extreme off-road ’22 Bronco Raptor. If you have to ask, no, apparently the boulder-crushing Bronco Sasquatch package just isn’t enough.

The Raptorized version of the Dearborn automaker’s reborn Bronco builds on the vehicle’s already heavy-duty chassis, adding a range of upgrades intended to allow the body-on-frame SUV to tackle just about anything Mother Earth might throw at it (see chassis below).

Designed and engineered by the same Ford Performance team behind the F-150 Raptor, the Bronco Raptor gets long-travel suspension and Fox shocks bolted to uprated shock towers and mounts, heavy-duty skid plates protecting the underside from front to rear, stronger steering gear, more powerful brakes and a B-pillar crossbar and reinforced C-pillar to hold it all together. The rear axle is upgraded to a Dana 50 unit, while the front Dana 44 gear drives upgraded half-shafts.

“We had to build the Bronco Raptor – it’s our ultimate vehicle for hardcore off-road enthusiasts who demand something more,” says Carl Widmann, Ford Performance chief engineer. “Like the Ultra4 desert race trucks, the ‘Raptor of SUVs’ conquers desert dunes at highway speeds and is equipped with competition-level off-road technology and hardware.”

Under the hood, Bronco Raptor gets an upgrade to a 3.0L twin-turbo V-6 (below) producing “more than 400 hp” – the engine makes 400 hp and 415 lb.-ft. (563 Nm) of torque in the Explorer ST. The engine is likely to punch above those specs thanks to significant changes to the induction system that result in a 50% reduction in flow impedance for the engine. Power routes through a 10-speed automatic transmission. 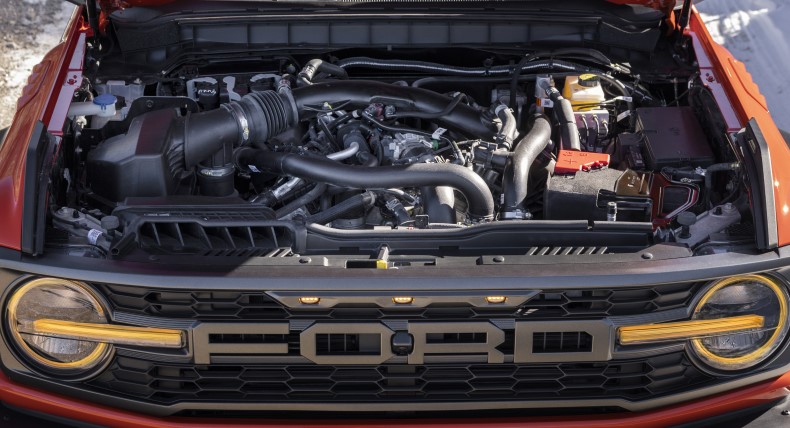 Two new modes are added to the vehicle’s G.O.A.T. (Goes Over Any type of Terrain) system: Baja, which keeps the turbos spooled for immediate response at speed, and Tow/Haul, which takes advantage of the Raptor’s 1,000-lb. (454-kg) increase in towing capability to 4,500 lbs. (2, 041 kg).

Inside, the Raptor gets a 12-in. (30-cm) digital cluster, unique steering wheel, high-bolster seats and splashes of Ford Performance Code Orange throughout.

“The Bronco Raptor interior was designed around what we know hardcore off-road racers want in a vehicle,” says Ryan Olsson, design manager. “From the all-new Performance View on the cluster and unique steering wheel with paddle shifters and fingertip access to Raptor-specific controls, to its race-ready, high-bolster front seats, Bronco Raptor leaves the factory ready for the starting line.”

Offered in 4-door hardtop configuration only, the Bronco Raptor goes on sale this summer starting at $69,995, including $1,495 delivery fee. Ford will start taking orders in March with priority going to Bronco customers who’ve yet to take delivery on their now more mundane model. 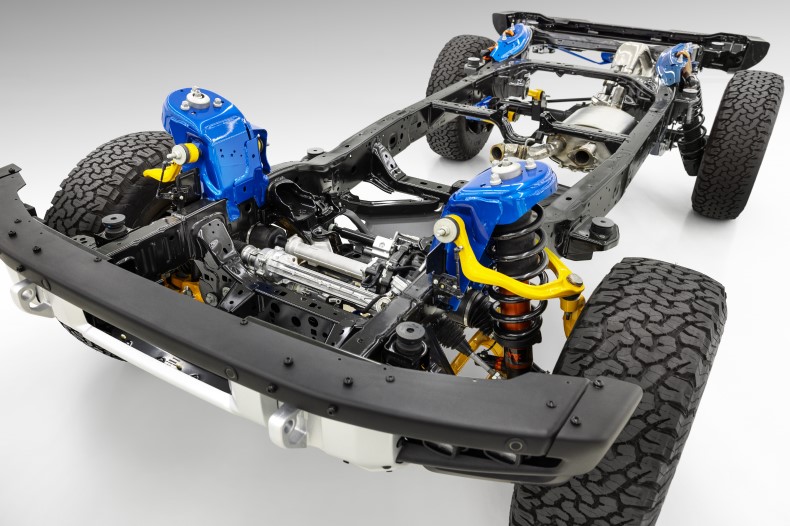