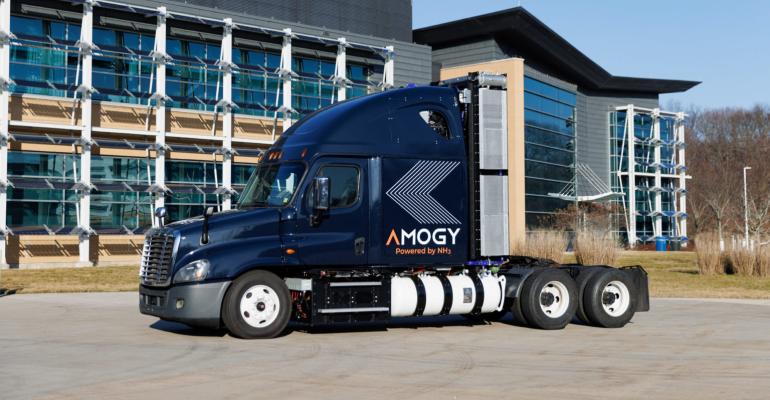 While there is a push to convert semi trucks and port power to hydrogen, Amogy believes ammonia will be a better fuel long term.

While the heavy-truck industry grapples with federal and some state regulations around zero-emission cargo hauling and getting off diesel and onto hydrogen power, ammonia-powered semi-trucks also could be part of the solution.

Brooklyn, NY-based Amogy is currently showcasing a retrofitted 2018 Freightliner Cascadia Class 8 truck powered by an ammonia-powered fuel cell. Amogy’s truck holds about 900 kWh of energy, and takes only about eight minutes to refuel. According to the company, the system has five times the energy density of batteries and is far cheaper to transport and store than hydrogen.

Amogy was founded in 2020 by four MIT Ph.D. alumni interested in decarbonizing transportation vehicles. The group believes ammonia is a cleaner, more scalable energy stock going forward than either lithium-ion batteries or hydrogen.

The science is there. Ammonia exists as a liquid at room temperatures, making shipping and storage far easier and less energy-dependent than hydrogen.

The initial research by Amogy led the engineers to the realization that ammonia presents a huge opportunity on the path to sustainability. Despite its noxious odor, it is actually an environmentally friendly, high-performance alternative to both diesel and hydrogen.

Amogy’s journey to proving the premise includes integrating the technology into a 5-kW drone, then a 100-kW John Deere tractor and now the semi-truck. The system went through numerous hours of testing on the campus of Stony Brook University. Amogy later this month expects to conduct full-scale testing on a test track to showcase the ammonia-powered truck’s performance under real-world conditions.

“Beyond its energy density and liquid phase at an ambient temperature, ammonia is an optimal fuel to achieve rapid decarbonization of heavy transportations because it is available globally with existing infrastructure already in place,” Amogy CEO Seonghoon Woo says.

Ammonia is among the top five chemicals produced in the U.S. The chief commercial method of producing ammonia is by the Haber-Bosch process, which involves the direct reaction of elemental hydrogen and elemental nitrogen. Because 80% of ammonia is used for agriculture, production for transportation will have to scale up to meet demand if the technology takes off.

As ever, the debate over using hydrogen or ammonia to power vehicles or stationary power to reduce carbon emissions rests on how the two are produced and if burning fossil fuels is involved. Both ammonia and hydrogen, which is emission-free when it powers a fuel cell, can be made from renewables ­– solar and wind – and has an advantage of being easily transported and stored.

At atmospheric pressure, ammonia is a gas with a boiling point of −33.3° C (−28.0° F). Kept cold or under a small amount of pressure it's easy to liquefy, making it a much “greener” fuel to transport and store than hydrogen. Ammonia is also cheap to store and transport, while hydrogen is some 30 times more expensive to store. It’s those numbers that have the industry very curious as it braces for regulatory crackdowns on diesel.

While these approaches have been floated for decades without gaining much traction, today there is a global push, backed by billions of dollars and led by the U.S., China and the EU, to scale up real alternatives to oil and natural gas to reduce carbon emissions and global warming, as well as defang Russia and OPEC from having undue influence on industrialized economies.

Companies can make hydrogen and ammonia anywhere, while oil is concentrated in several countries, many of which have unfriendly foreign policies.

Besides long-haul trucking, ammonia is viewed as a replacement for diesel in cargo shipping too. Hydrogen also is an option for both industries.

Ammonia, believes Amogy’s founders, has a lot of advantages over hydrogen. Hydrogen is notorious for leaking away through the metal walls of containers and for compromising the steel it comes into contact with, as well as for taking a lot of energy to liquefy and move. As far as density goes, there's one and a half times more hydrogen in a gallon of ammonia than there is in a gallon of hydrogen. Ammonia also packs about 20 times the energy of lithium-ion batteries, according to NewAtlas.com.

The benefits of both in terms of emissions and storage are too good to ignore.

Truly "green ammonia" can be produced by using renewable energy to create hydrogen through electrolysis, and then running it through a process to make ammonia powered by “green” energy as well. There are other “green” methods for making ammonia under fast-track development, including a kind of “reverse fuel-cell” process that converts renewable energy – water and air – into ammonia without needing the electrolysis powered by fossil fuels. Eventually these processes could be scaled to produce ammonia for both agriculture and liquid energy for transportation. But it will be a gradual ramp-up.

Speed is always a relative term. But when economic, environmental and political goals are aligned, as they are now, much can be accomplished.