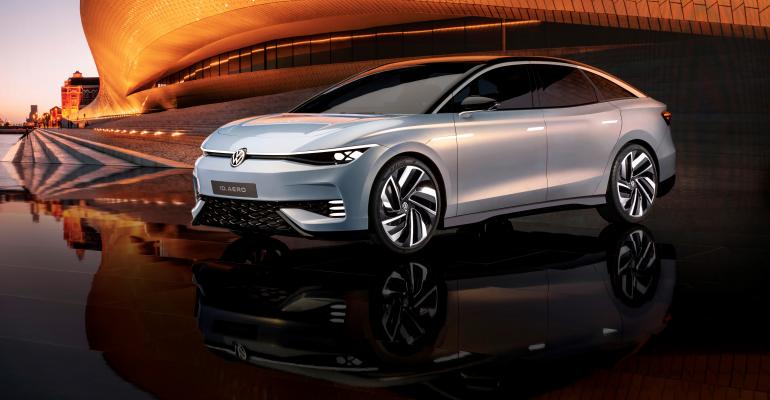 The 4-door sedan due in U.S. showrooms in 2024 will serve as the flagship for VW’s electric-powered ID. lineup.

Volkswagen previews its first battery-electric sedan with the unveiling of the ID. Aero concept.

Based on Volkswagen’s MEB platform, the 4-door model is to go on sale in China during the second half of 2023, with production initially taking place at VW joint-venture partners FAW (First Automobile Works) and SAIC (Shanghai Automotive Industry Corp.) in the cities of Changchun and Shanghai, respectively.

VW officials suggest production of U.S. versions of the 197-in. (5,004-mm) -long sedan will take place at the automaker’s Emden plant in Germany, with deliveries slated to begin by the end of 2024.

A wagon version isn’t likely to see production until 2025 at the earliest.

Wards has been told the ID. Aero will take the ID.6 sedan name in production, positioning it alongside the Chinese-market-only ID.6 SUV at the head of the ID. lineup. 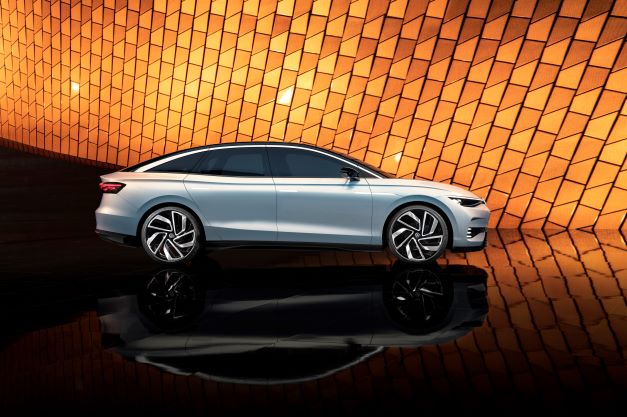 It is the third sedan concept to carry the ID. name following the earlier Vizzion concepts.

A prominent VW badge forms the centerpiece of the ID. Aero’s front-end styling. It is intersected by a light bar housing recessed headlamps with new LED graphics on either side.

Below is a structured bumper with three individual vertically stacked daytime driving lights at each corner and a high-gloss black insert in the middle.

A short hood takes full advantage of the packaging advantages offered by the MEB platform.

Farther back, the ID. Aero features a high waistline, with a deep-etched swage running from the headlamps all the way back to the taillamps providing it with a distinctive shoulder line. It also adopts flush door handles and a wheelbase dimensioned to accept wheels up to 22 ins. (559 mm) in diameter.

A rounded roofline is reminiscent of that first established on the second of VW’s Vizzion concepts.

The rear receives a high-set trunk and full-width taillamp with illuminated VW badge.

With a drag coefficient of 0.23, the ID. Aero promises to be the most aerodynamically efficient of the automaker’s electric models. 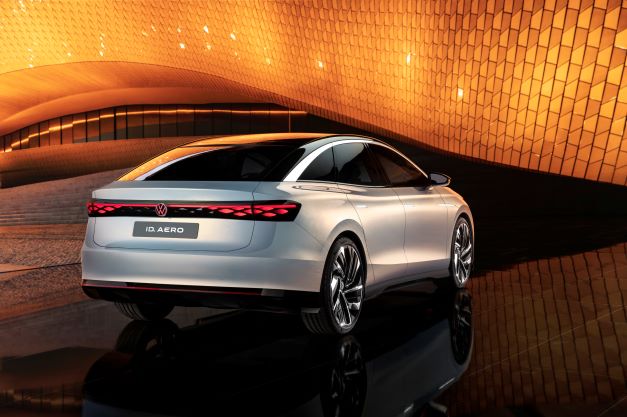 The concept features a 770-kWh battery, which VW says will provide the production version of the ID. Aero with a range of up to 385 miles (620 km) on the WLTP test cycle. Other battery options are planned to be offered, including a smaller 52-kWh unit.

Volkswagen has yet to confirm power options for the ID. Aero. But as with other ID. models, including the closely related ID.4 and ID.5, the production version is expected to offer the choice of either single-motor rear-wheel drive or dual-motor all-wheel drive.

To make way for production of the ID. Aero at Emden in Germany, Volkswagen plans to relocate production of the next generation European Passat to a Škoda-run factory in Kvasiny in the Czech Republic, where it will be produced alongside the next Škoda Superb.