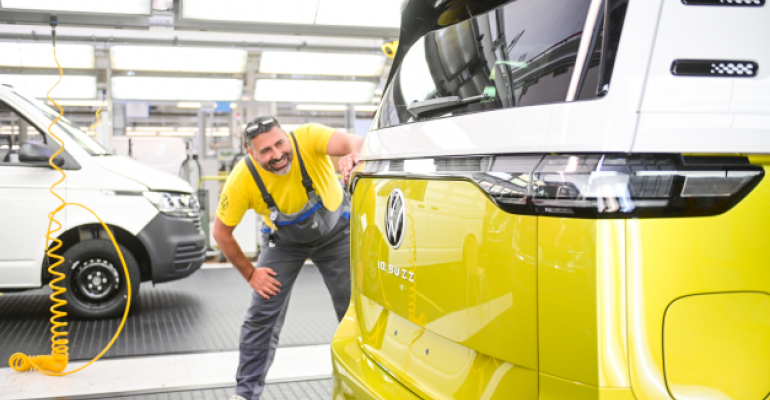 The Hanover plant builds three models based on three different platforms and can have three different drives: the ID. Buzz BEV, the new Multivan as a plug-in hybrid and with conventional drive, and variants of the T6.1 Transporter van with a combustion engine.

Volkswagen Commercial Vehicles launches production of the ID. Buzz and ID. Buzz Cargo at its Hanover, Germany, plant, making it the third German production site for the automaker’s ID. Family of battery-electric vehicles. Deliveries to customers are to begin in the fall.

“The ID. Buzz is a milestone in the electrification of the brand and the plant in Hanover,” Josef Baumert, Member of the VWCV Brand Management Board for Production and Logistics, says in a news release. “In just eight years’ time, more than 55% of our vehicles in Europe will have battery-electric drive. The ID. Buzz has a leading strategic role in this.”

The VW division produces three models at the Hanover plant. They are based on three different platforms and can have three different drives: the ID. Buzz BEV, the new Multivan as a plug-in hybrid and with conventional drive, and variants of the T6.1 Transporter van with a combustion engine. The vehicles are partly produced on one line. 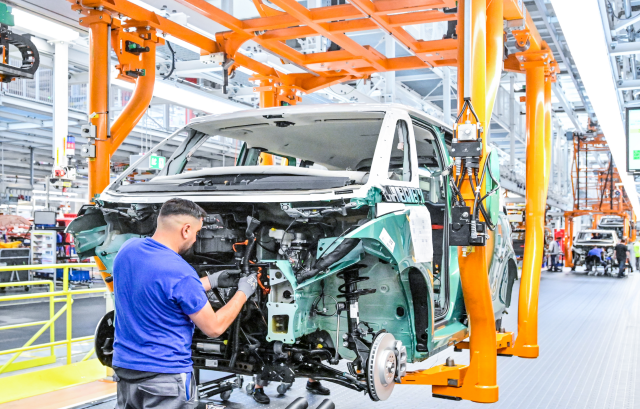 “Our production method is highly complex, but it enables us to respond flexibly to customer demand”, says Baumert. Despite numerous factory modifications over the past two years, T6.1 production continued uninterrupted.

During the start-up of the ID. Buzz, the Hanover factory’s 4,000 employees were trained to produce the new vehicles. “We trained our employees in high-voltage technology and also adapted our apprenticeships to the new tasks,” he says.

“The workforce did a great job during this time: They accomplished training for the ID. Buzz parallel to the series production of the T6.1 and the new Multivan – and all this during the COVID-19 pandemic,” Baumert says.

The Hanover plant features new equipment and processes; the degree of automation for the body construction of the ID. Buzz has increased to 92% compared to 77% for the T6.1. Skilled workers manage large parts of the plants using computers and mobile devices such as smartwatches. Operators and machines are in constant

contact. The robot systems report possible problems which can be solved during operation.

“Hanover is on the way to becoming a ‘smart factory,’” Baumert says.