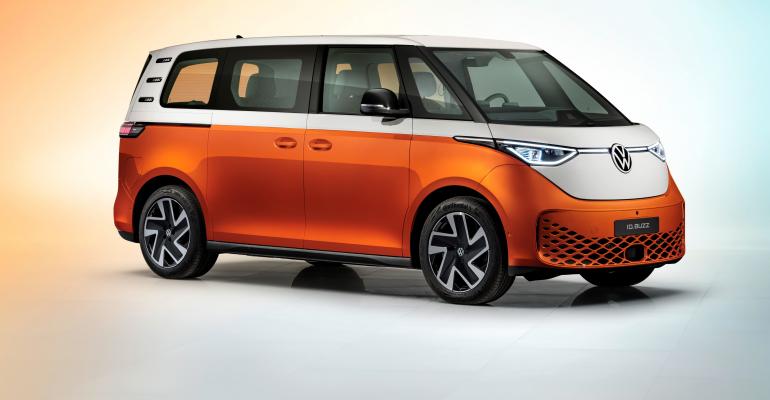 The versatile MPV and its commercial-vehicle Cargo sibling aim to resurrect the spirit and sales success of the original Microbus.

Volkswagen unveils the production version of the ID. Buzz, five years after the electric-powered MPV-cum-commercial-vehicle was previewed as a retro-futuristic reworking of the original Microbus at the 2017 Detroit auto show.

Produced in the same commercial-vehicle factory as the existing sixth- and seventh-generation Multivan in Hanover, Germany, the latest addition to the all-electric Volkswagen ID. lineup is planned to go on sale in May across Europe in initial standard-wheelbase guise. Customer deliveries are to begin in September.

Two rear-wheel-drive ID. Buzz variants will be available from the outset: a 5-seat MPV with two rows of seats and a more rugged 2-seat commercial vehicle called the Cargo. Both feature the same rear-mounted asynchronous electric motor used by the ID.4 CUV, delivering 201 hp and 228 lb.-ft. (309 Nm) of torque.

Pricing is yet to be officially confirmed, though Volkswagen says the ID. Buzz will start at about €50,000 ($55,300) for the Cargo and increase to more than €60,000 ($66,400) for the more comprehensively equipped MPV in Europe. They are positioned to compete against an increasing number of electric-powered rivals, including the Mercedes-Benz e-Vito and EQV. 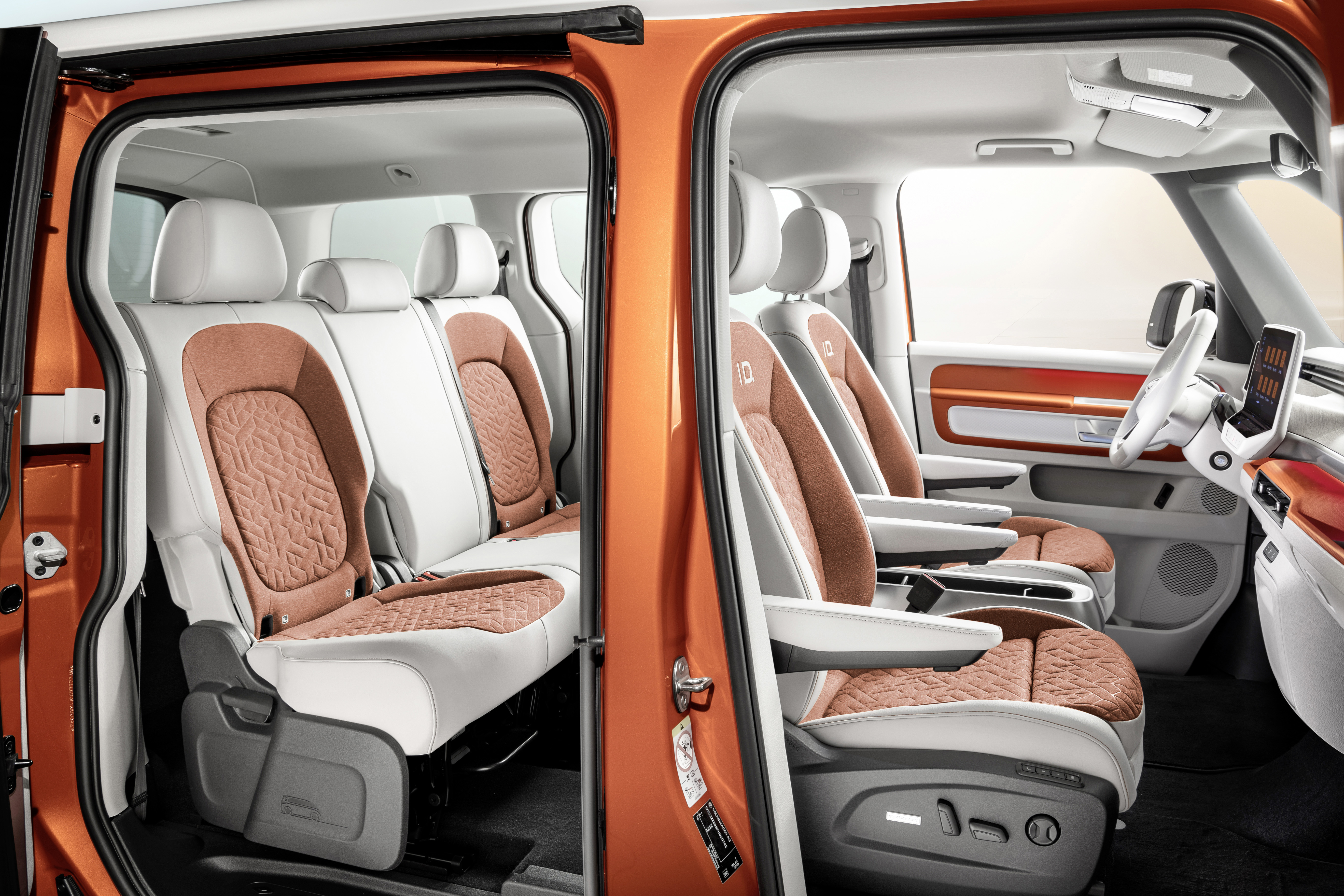 VW says a long-wheelbase passenger model, with seating for up to eight in three rows of seats, will debut for the North American market in 2023 and go on sale in 2024. Again, prices are yet to be announced, though Wards has been told they will likely start at about $60,000.

An ID. Buzz California camper van has also been confirmed for North American markets in 2024.

Details of the drivelines planned for the U.S. versions of the ID. Buzz have not yet been announced, though Volkswagen confirms to Wards that more powerful dual-motor, all-wheel-drive models, including a GTX performance flagship offering up to 295 hp and 339 lb.-ft. (460 Nm) of torque, are planned to join the lineup.

The ID. Buzz MPV offers a set of body styles similar to those of the existing internal-combustion-powered Multivan with conventionally hinged front doors and sliding doors (optional with electronic operation) on either side at the rear, along with a large vertical tailgate that opens at bumper level.

The ID. Buzz Cargo offers the choice of one or two sliding doors along the sides and either a single upward hinging tailgate or windowless wing doors that open out on exposed steel hinges left and right at the rear.

As hinted at in teaser photographs issued by Volkswagen in recent months, the exterior styling advances the look established on both the ID. Buzz and ID. Buzz Cargo concepts.

Details such as the LED headlamps and full-width LED taillamps, have also been reworked, giving them a more technical appearance. Wheels range from 18-in. as standard up to 20-in. as an option.

Volkswagen is yet to provide dimensions for the long-wheelbase model, though officials suggest it will receive a 9.8-in. (249-mm) longer wheelbase than initial standard-wheelbase European models, suggesting ID. Buzz models destined for the U.S. will measure over 195.0 ins. (4,953 mm) in length.

The ID.Buzz’s drag coefficient of 0.28 for the MPV and 0.29 for the Cargo is commendably low given the BEV’s large front area and sizeable exterior mirrors. 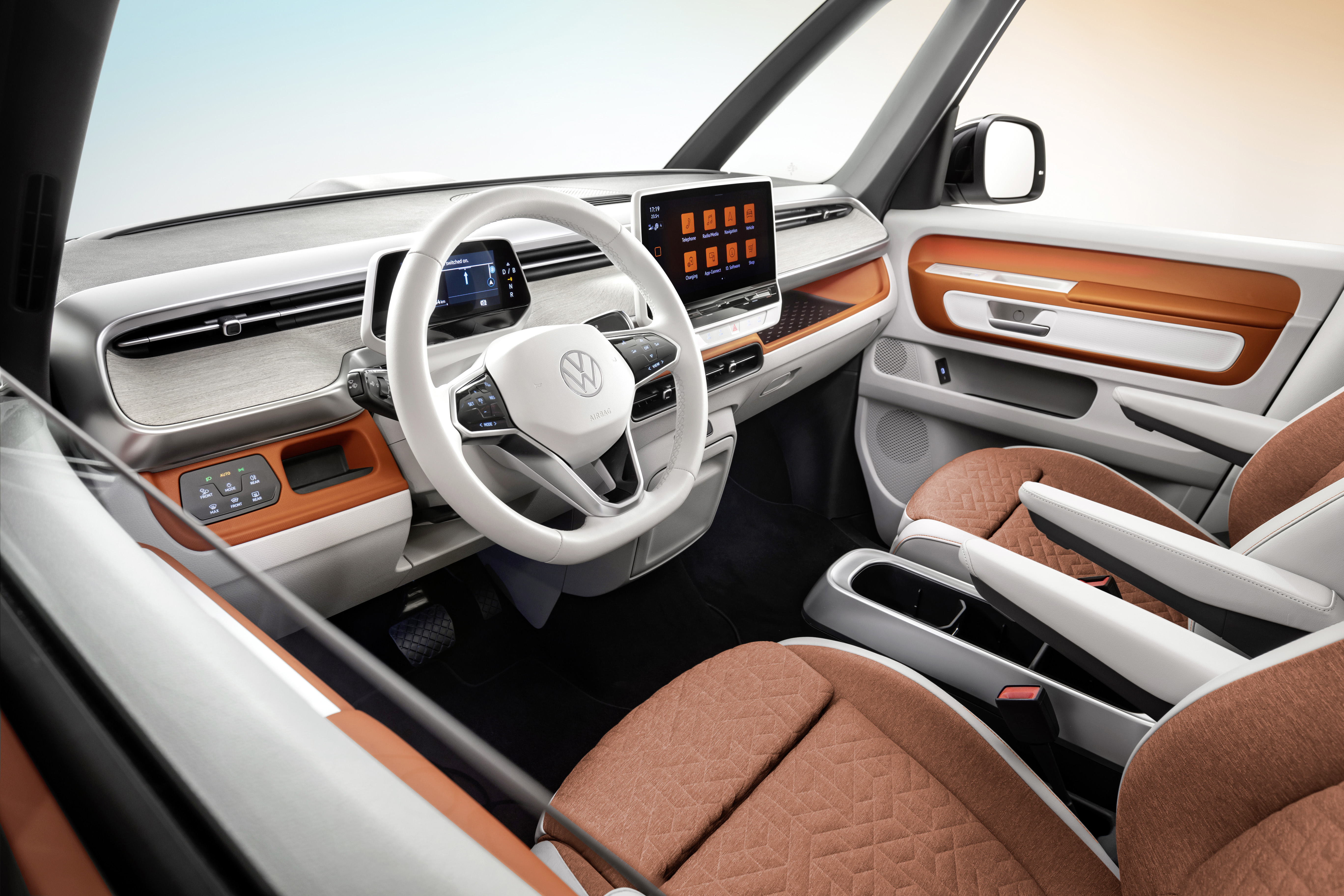 Inside (pictured, above) is an ergonomically sound driving position similar to that used by the Multivan in an otherwise largely uniquely styled cabin. The front seats, with integral armrests, are set 10.3 ins. (26 cm) higher than those of the ID.4.

With a compartment that hinges down from the base of the dashboard to reveal two large drink holders, a pod-like center console housing both a bottle opener and ice scraper called the “Buzz Box” between the front seats and door trims featuring large bins, the ID. Buzz is big on storage space.

Volkswagen says it will offer its latest electric model with up to eight USB ports as well an optional inductive smartphone charging pad.

In line with other ID. models, the ID. Buzz also gets over-the-air software update functionality via an embedded SIM card. In its most sophisticated specification, it incorporates more than 30 different driver-assist systems, including Car2X communication, as well as the latest incarnation of Volkswagen’s Travel Assist with an automated lane change function at speeds up to 56 mph (90 km/h).

The MPV’s second-row seat features folding backrests, but it cannot be removed.

In keeping with other ID. models, there is no front luggage compartment; the front end houses the air conditioning unit and other electrical gadgetry. 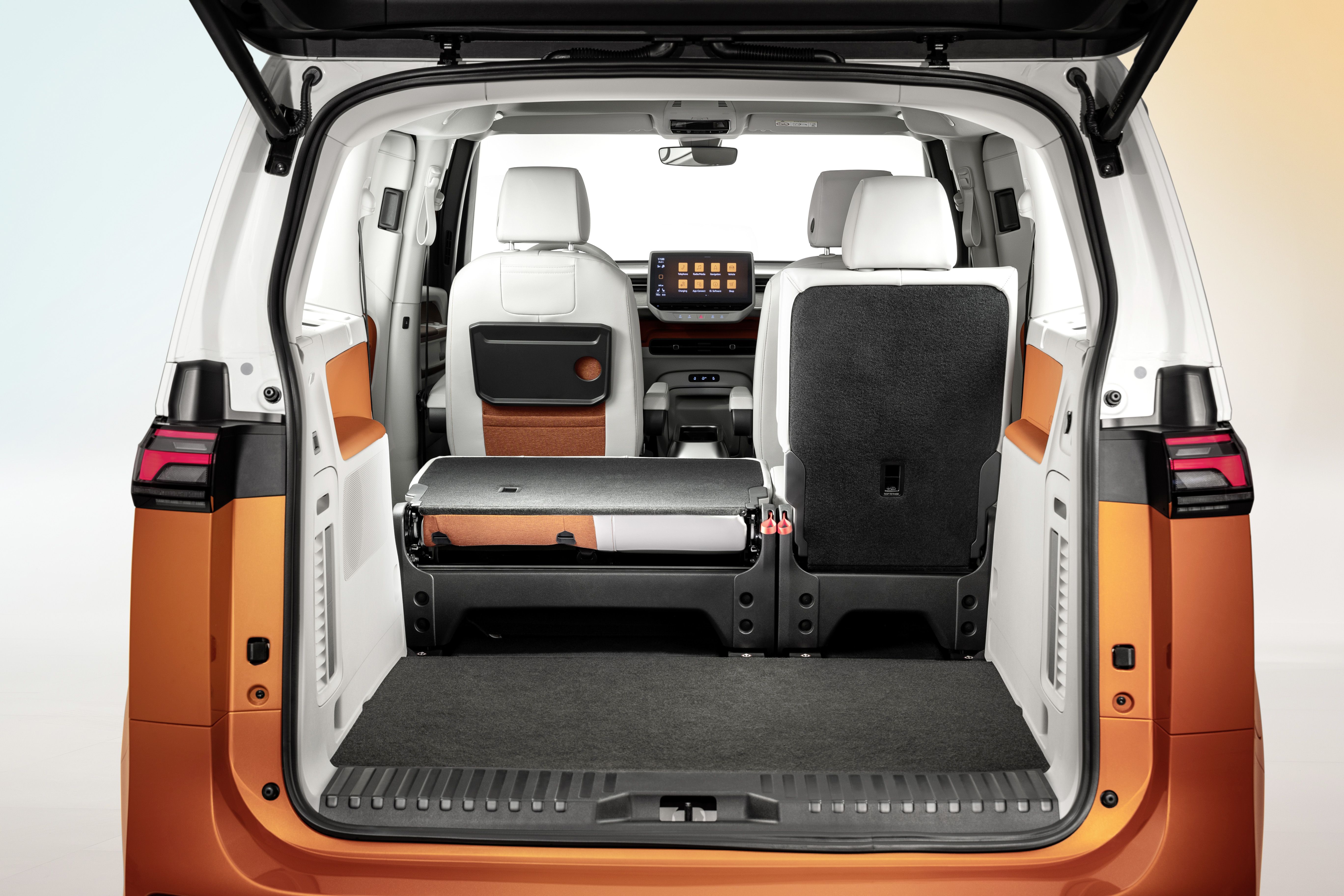