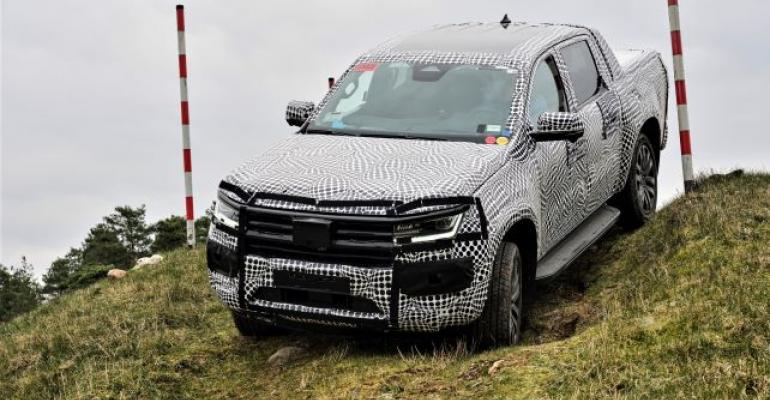 The pickup truck twins are being engineered with electric drivelines and could challenge the Tesla Cybertruck and Rivian R1T.

Volkswagen has kicked off the engineering of an electric-powered version of its upcoming second-generation Amarok.

The German automaker has teamed up with Ford for the zero-emission pickup truck, which could see production by the middle of the decade as a smaller and potentially more efficient alternative to the likes of the Tesla Cybertruck and Rivian R1T.

The partnership is an extension of the so-called Global Alliance, in which VW and Ford are developing conventional gasoline and diesel versions of the second-generation Amarok and fourth-generation Ranger alongside each other in a program based at Ford Australia headquarters in Broadmeadows, Australia.

“We’re looking at a pure-electric version,” Lars Krause, Volkswagen Commercial Vehicle board member responsible for marketing, says during a media presentation for the new Amarok in Wolfsburg, Germany. “It is still early, but it is something we are considering within the lifecycle.”

The move to begin engineering studies of a battery-electric Amarok comes after VW decided not to offer the Amarok with the gasoline-electric plug-in hybrid drivetrain earmarked to be made available for its sister model, the Ford Ranger, in 2023.

Despite calls for a plug-in hybrid version of the new Amarok, particularly in European markets where upcoming emission-based road taxes may severely penalize gasoline and diesel versions of the new pickup, Volkswagen says such a model would make sense only when it can guarantee an extended electric range.

The VW official is confident the chassis used by the new Amarok, a box steel structure developed by Ford, could accommodate an electric drivetrain and battery pack.

“We think it is possible. Obviously, we’d need to modify certain elements. But, yes, we are seriously considering an electric variant,” he says.

VW plans to invest up to $180 billion across its portfolio of brands into the development of BEVs this decade.

While it is yet to officially pinpoint the electric Amarok as one of the models it plans to place into production, the German automaker’s commercial-vehicles division is fully integrated into the program, having secured a key role in the engineering of the new ID. Buzz, which is produced at its manufacturing headquarters in Hanover, Germany. It also has engineered an electric version of the Multivan in partnership with EV conversion company ABT.

Ford has launched production of the F-150 Lightning, an electric-powered version of its perennial best-selling fullsize pickup, paving the way for a smaller model based on the new Ranger.