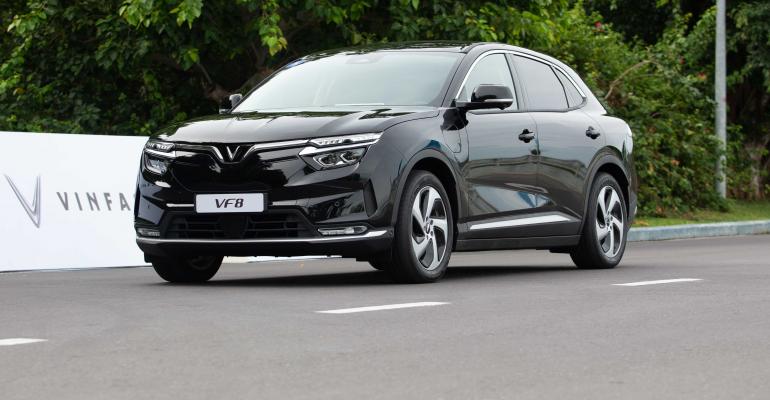 VinFast’s VF 8 arrives in U.S. by end of year.
Vehicles

VinFast’s VF 8 is a solid battery-electric CUV, but needs some improvements in propulsion before it’s ready for prime time in the U.S. market.

HANOI, Vietnam – You can’t tell everything about how a car drives in 15 minutes, but you can learn a lot.

For example, the VinFast VF 8 is a proper, midlevel battery-electric CUV. It won’t wow anyone who’s driven other large BEVs, but it certainly could appeal to a fair number of American car buyers, especially given the current demand for BEVs and a competitive price tag.

Whether there’s demand for a new BEV brand from Vietnam or if that detail represents too high a hurdle will be interesting to watch.

It’s a hurdle that’s rapidly approaching. VinFast, part of Vietnam’s largest conglomerate, VinGroup, moves quickly. It was started in 2015 and went from selling its first gasoline vehicles to shifting to all-electric vehicles in just five years. VinFast says it will deliver the first VF 8s in the U.S. by the end of 2022.

VinFast’s international ambitions recently allow Wards to test drive the VF 8 in Vietnam. On a short closed course – just over 4 miles (7 km) – that doesn’t offer any real curves, the VF 8 proves itself to be a capable vehicle.

There are no knockout features in the powertrain or infotainment system, but neither are there any problems, even minor ones. We are able to drive the VF 8 Eco trim, which uses two motors – you can unfortunately hear their high-pitched whine – to provide 348 hp and 368 lb.-ft. (499 Nm) of torque.

VinFast also offers the VF 8 Plus, which has more hp (402), more torque (457 lb.-ft., or 620 Nm) and quicker acceleration. VinFast estimates the various VF 8 models will have full battery ranges of between 248 and 292 miles (399-470 km), depending on trim and whether it has the standard or enhanced-range battery.

The VF 8 will blend in well with the current American automotive landscape. It’s an inoffensive midsize CUV design with an attractive front end that emphasizes the V-for-VinFast-shaped grille and LED headlights.

Sliding into the driver’s seat feels familiar, with comfortable seats in a roomy cabin. The 15.6-in. (40-cm) center screen dominates the dashboard, which offers just a smattering of physical buttons (pictured, blelow).

So far, so good. But there are issues. One of the VF 8’s main problems is its sluggishness. The VF 8 will do fine at the average stoplight, but VinFast somehow has managed to eliminate the inherent instant torque of a BEV. The VF 8 we drive is a prototype model, so there’s plenty of room for improvement, but we can’t miss the sad delay between pressing the pedal and any actual acceleration.

VinFast claims the Eco trim can go from 0-60 mph (97 km/h) in 5.8 seconds (5.3 seconds for the Plus trim), but our hand-held stopwatch estimate was closer to 9 seconds, even in Sport mode. Tweaks to the throttle map or motor output will be most welcome before the VF 8 goes on sale in the U.S. or, at the latest, when the first American-made VF 8s (and the larger VF 9s) start rolling out of VinFast’s new North Carolina plant in July 2024.

The VF 8 has two regenerative brake settings – low and standard – but even standard feels like you’re coasting. A BEV should offer everything from no brake interference to strong one-pedal driving with its brakes, but the VF 8’s highest regen level is nowhere near strong enough. Perhaps a software update can add another level or two.

Unfortunately, no amount of code will install buttons on the VF 8 that will allow drivers to change regen brake levels with a touch. Instead, changing the level is buried deep in a settings menu on the screen. Not ideal, as is the choice to show the speedometer only in the head-up display and the top left corner of the infotainment screen.

Acceleration and brake levels aside, the VF 8 handles well, and the brakes grip when and where they are supposed to. Steering is light but not loose. Longer drives undoubtedly will be required to assess the VF 8’s true colors.

Overall, the initial impression is that the VF 8 will offer buyers a fair amount of style and BEV power for its starting price of $40,700. That cost doesn’t include fees or the required battery subscription fee of $110 a month for unlimited miles.

Anyone who drives less than 310 miles (499 km) a month can opt for a lower fee, but whatever one you choose, VinFast is offering customers the chance to get into a large BEV for less than other brands, then amortizing the cost of the battery.

It’s an idea that’s bounced around the BEV world for a while (NIO tried it in China) but not like this in the U.S. Perhaps battery subscriptions will be the boost of adrenaline that helps VinFast jump the last hurdle to sales success. Maybe it’ll be the thing that trips the company up.

The brand is about to hear a starter’s pistol unlike anything it’s faced before. VinFast’s U.S. race is about to begin, and the VF 8 needs to get ready.