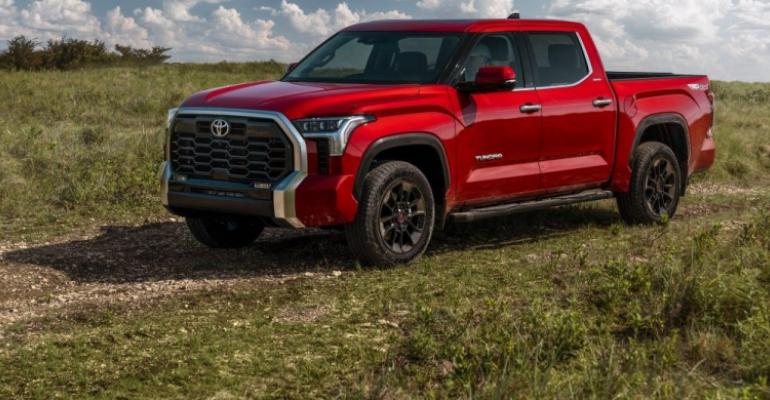 Start Slideshow ›
Trying yet again to break the stronghold on fullsize pickup trucks held by Detroit brands, Toyota reveals the all-new ’22 Tundra pickup, set to begin production in November at its plant in San Antonio, TX, and reaching first customers in December.

This represents Toyota’s third generation of the Tundra, which first arrived in 1999 and followed the T-100 pickup, which had been available in the U.S. starting in 1993.

The ’22 Tundra springs from Toyota’s new F1 Platform engineered to underpin other body-on-frame vehicles such as the Land Cruiser and Lexus LX SUVs. It is not clear if the Toyota Sequoia, which arrived in 2000, was redesigned for 2008 and has shared its architecture with the Tundra, also will switch to the new platform.

The new bed is made of aluminum-reinforced composite, under which Toyota carries over the solid rear axle of the previous Tundra. Leaf springs at the rear have been replaced with coil springs for better ride and handling.

Inside, the Tundra interior was designed to feel “clamped together” for rugged durability and to accommodate different lifestyles. While a larger percentage of Ford, General Motors and Ram pickups are used for work, Toyota’s Tundra has a broader following for lifestyle and recreational purposes.

An 8-in. (20-cm) multimedia touchscreen will be standard, while an all-new 14-in. (36-cm) display screen will be available, sitting horizontally across the instrument panel and providing access to infotainment features and vehicle settings. Directly in front of the driver will be a standard 4.1-in. digital multi-information screen or the available 12.3-in TFT display with digital gauge clusters.