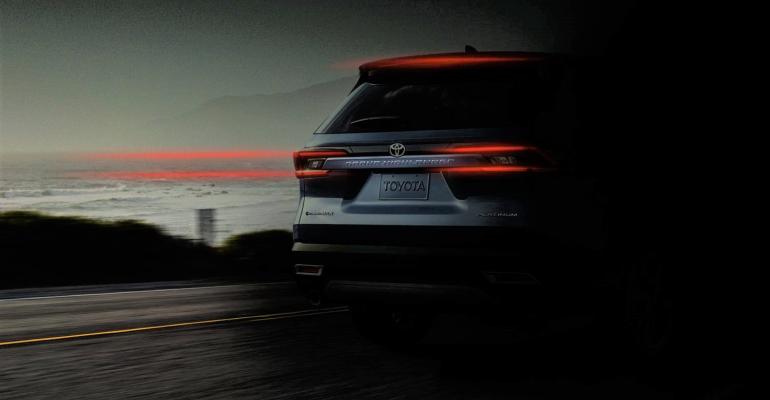 Toyota describes the Grand Highlander as being as “equipped for family adventures” and “the ultimate road-trip vehicle,” implying it will be roomier than the existing Highlander introduced in October and slot between that CUV and the Sequoia fullsize SUV.

Toyota releases a teaser image of the ’23 Grand Highlander and announces the all-new, 3-row large CUV will make its world premiere Feb. 8, 2023, on Toyota’s YouTube channel, @ToyotaUSA, on the eve of the Chicago auto show.

Toyota describes the Grand Highlander as being “equipped for family adventures” and “the ultimate road-trip vehicle,” implying it will be roomier than the existing Highlander introduced in October and slot between that CUV and the Sequoia fullsize SUV. No word if the “Grand” moniker indicates luxury, but it’s no secret fully loaded large CUVs and SUVs have big profit margins. This new iteration of an existing nameplate is likely Toyota’s attempt to further its presence in the lucrative sub-segment.

The existing Highlander, offered with both internal-combustion-engine and hybrid powertrains, dates back four generations to 2001 and is one of the country’s top-selling 3-row utility vehicles.

It ranked No.1 in Wards Intelligence’s list of large CUVs in first-half 2022 with 117,403 deliveries, well ahead of the second-place Kia Telluride’s 46,893. The only 3-row vehicle to outsell Highlander in the 6-month period was the Jeep Grand Cherokee midsize SUV with 134,369.

Toyota hasn’t released technical details, pricing information or an availability date for the Grand Highlander. But the teaser image shows a Hybrid Max badge, indicating it will share that powertrain with Toyota’s upcoming Crown sedan – a turbocharged 2.4L I-4 producing a combined 340 hp and 400 lb.-ft. (542 Nm) of torque.

There’s no word yet from Toyota on whether the Grand Highlander also will offer the 265-hp gasoline turbo-4 new to the standard ’23 Highlander. The Highlander Hybrid, combining a 2.5L DOHC 4-cyl. with two electric motor-generators, makes 243 hp and is rated at 36 mpg (6.5 L/100 km).