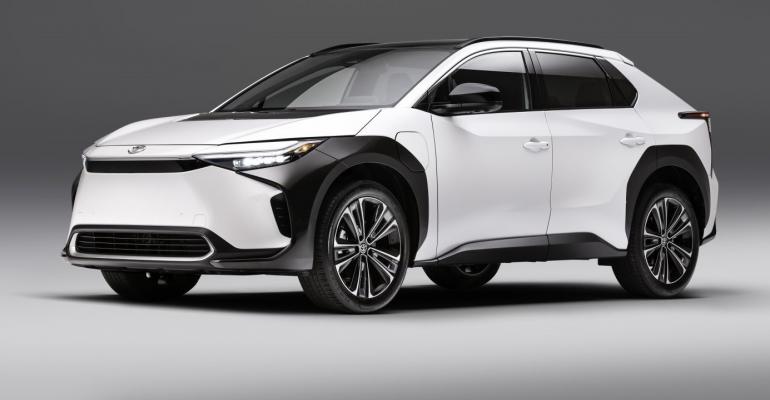 Toyota says the 250-mile range estimate is for the XLE version with front-wheel drive, which implies less will be available if customers opt for the light off-roading capability for the BZ4x BEV.

Toyota’s first real entry in the battery-electric vehicle market is a stylish CUV with a range of up to about 250 miles (403 km), all-wheel drive for “light” off-roading and plenty of tech features that new EV buyers expect, including an updated Toyota Safety Sense 3.0 package and the automaker’s new multimedia system.

Toyota took the wraps off the BZ4x in California this week but is saving many of the important details, including price, for later.

The BZ part of the name stands for “beyond zero,” Toyota’s upcoming sub-brand for its all-electric vehicles. The company says it will sell seven models under the BZ name, globally, but provides no further information about these vehicles nor says if any of them will join the BZ4x in North America.

Not all of Toyota’s BEVs will fall under the BZ brand, and the automaker plans to sell eight additional, non-BZ battery-electric models globally by 2025. Toyota has offered BEVs before, but they were limited, including small fleets of two generations of the RAV4 EV in 1997 and 2012 (the latter coming from a partnership with Tesla). The BZ4x will be a full production model.

“The BZ4x gets us one step closer to our long-term goal of achieving carbon neutrality,” says Cooper Erickson, group vice president-product planning and strategy.

For now, we can learn a little about the BZ4x, with its hammerhead front styling and wheels placed far out in the corners. The BZ4x looks the part of a modern BEV, with cladded wheel arches and a clean rear end, but the real excitement lies inside. 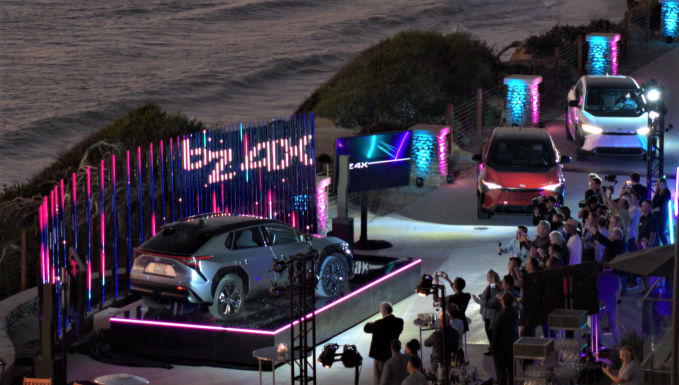 The powertrain uses a high-capacity lithium-ion battery pack. Toyota doesn’t offer precise capacity figures, but the global version of the BZ4x will have a pack with about 64 kWh. The automaker does say it is making battery reliability a selling point, promising the pack will retain 90% of its initial capacity after 10 years.

Toyota says the 250-mile range estimate is for the XLE version with front-wheel drive, which implies less will be available if customers opt for the light off-roading capability.

The BZ4x will be available with an all-wheel-drive system that includes X Mode, a technology borrowed from Subaru. That’s not the only way Subaru is involved with the new BEV, since the two automakers worked together on the e-TNGA BEV platform that will be used for both the BZ4x and Subaru’s upcoming Solterra EV.

As with other skateboard BEV platforms, the e-TNGA platform offers a low center of gravity and structural rigidity for improved drivability and handling, Toyota says.

In what’s about to be a flood of new BEVs in the market – Toyota says there will be about 100 battery-electric nameplates in the market in the next four years – the automaker is confident the BZ4x will stand out simply by being a Toyota.

Vehicle reliability and accessibility will make the BZ4x easy to get into, Erickson says, adding the EV is also expected to attract attention because it’s a small CUV, right in “the heart of the market.”

“We’re selling 450,000 RAV4s a year,” he says. “There’s a tremendous amount of showroom traffic on that size of product, so we think it’s the right segment to go into. We chose a (CUV) rather than a sedan because we are really emphasizing the customer use case and not trying to focus on a range number. You can get better range with a sedan, but we really want to deliver a vehicle that has (CUV) functionality and no excuses.”

Single-pedal drive mode, a popular feature among BEV drivers, will be available on the BZ4x. Other tech features include a digital key that can unlock, lock or start the car from your smartphone and Toyota’s redesigned multimedia system that was developed by the company’s connected technologies team at the U.S. headquarters in Plano, TX, and debuted this fall in the Lexus NX and Toyota Tundra.

The BZ4x will be the first Toyota capable of over-the-air updates. The BZ4x’s version of TSS 3.0 will come with improved pre-collision system and dynamic radar cruise control.
Toyota says it will work with BZ4x customers to get home charging installed and is also working on providing public charging options. Details, as with so much else about the new BEV, will be available next year. The BZ4x will go on sale in the U.S. in the middle of 2022.