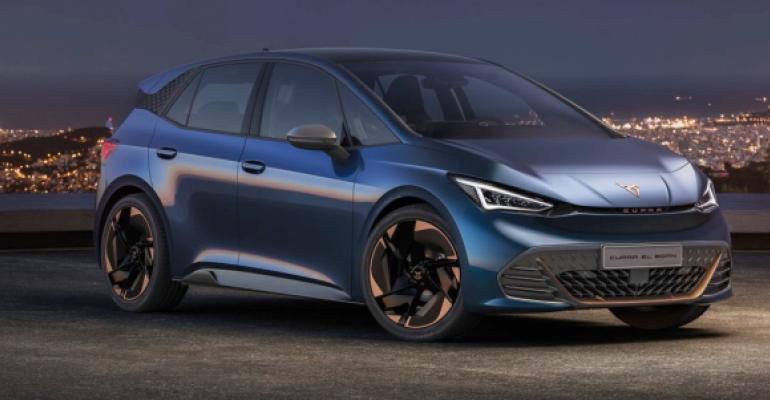 Unveiled at the 2019 Geneva Auto Show and due to go on sale in 2021, the el-Born will be built on SEAT parent Volkswagen’s MEB mechanical platform for EVs.

Unveiled at the 2019 Geneva Auto Show and due to go on sale in 2021, the el-Born will be built on SEAT parent Volkswagen’s MEB mechanical platform for EVs. Its 77-kWh battery is rated at 204 hp and provides nearly 310 miles (500 km) of range. SEAT says the battery can recover 162 miles (260 km) of range after 30 minutes of recharging.

Since its unveiling, SEAT has given the el-Born’s front end a more aggressive look reflecting the Cupra brand and has added copper-colored details to the bumper and copper-colored wheels.

Its silhouette resembles that of Volkswagen’s ID.3 BEV which went into production in November at VW’s plant in Zwickau, Germany, where the el-Born (a name derived from “electric-born”) also will be built.

SEAT CEO Carsten Isensee says the automaker plans to invest €5 billion ($5.9 billion) in Spain to 2025, with most of the money earmarked for new-vehicle R&D at the Martorell Technical Center where the SEAT plant is located.

“The Volkswagen Group has already assigned the pure-electric models that all its brands will build until 2025, although none of them will be built in Spain, but at SEAT we want to be one of the brands that build this type of vehicle from 2025," Isensee says.

He stresses building EVs in Spain will be profitable only if the government provides subsidies for their purchase and adequate charging infrastructure is developed.

Isensee predicts SEAT production will not return to pre-COVID-19 levels – some 500,000 units per year – until 2022. He says output this year and next is uncertain.

“SEAT lost €48 million ($56 million) in the first quarter of 2020 and the forecasts for the second quarter are quite worse,” he says.