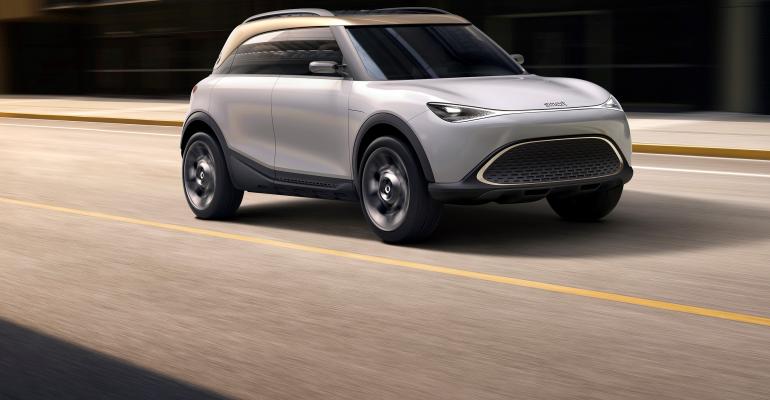 The Concept #1 design study presages the first model from the 2-year-old Geely-Mercedes-Benz joint venture. Smart has not commented on plans to import its new CUV to the U.S.

Smart previews the first production model it plans to launch under the joint control of Geely and Mercedes-Benz.

Called the Concept #1, the 168.9-in. (4,290-mm) -long conceptual design study showcases the design and packaging of an electric-powered B-segment CUV to be introduced to selected markets in 2022.

The study signals a clear shift in priorities for Smart, which Mercedes-Benz established in 1994 as a manufacturer of ultra-compact city cars.

Under the terms of an agreement by Smart’s two equal shareholders, the next generation of Smart models will be developed and produced by Geely in China. Mercedes-Benz’s contribution to the Sino-German partnership is restricted to the exterior and interior design.

Geely became a 50% shareholder in Smart with an investment made public by its chairman Li Shufu in March 2019.

Following approval from the Mercedes-Benz board, a joint venture company, Smart Automobile, headed by Geely executive Tony Xiangbei and headquartered in the Chinese city of Hangzhou, was formed later that year.

The Concept #1 establishes a new styling lineage expected to be reflected in all new upcoming Smart models.

Key exterior design elements of the two-tone design study created to preview Smart’s rival for the Nissan Juke, Volkswagen T-cross and Mini Countryman include a low-set front end with distinctively shaped headlamps, a full-width light beam and an illuminated grille.

Further back is a clamshell hood, a floating roof with panoramic glass, smooth bodyside surfacing, concealed door handles and a hatchback-style rear end with a tailgate that opens at bumper height.

The four-door CUV concept goes without a traditional B-pillar and receives conventional front-hinged front doors and rear-hinged rear doors. It rides on 21-in. wheels.

The team responsible for the new-look styling is based at Mercedes-Benz’s design headquarters in Sindelfingen, Germany, and is headed by Kai Sieber, who also oversees design operations for the German automaker’s van and truck divisions.

As confirmed by Smart, the upcoming production version of the Concept #1 is based on Geely’s open-source SEA (Sustainable Experience Architecture) electric car platform as used by other brands controlled by the Chinese automaker, including Volvo, Lynk & Co and Zeekr.

Chinese internet search giant Baidu also has secured rights to the SEA platform for its new EV company Jidu through a partnership with Geely announced in June.

Details of the new Smart CUV’s powertrain are yet to be revealed, though the SEA platform has been conceived to support a range of different layouts, including single motor/rear-wheel drive and dual motor/four-wheel drive.

Together with electric-only drive, the versatile structure offers the scope of hybrid drive through the integration of a range extender motor at the rear.

Inside, a flat floor provides for a roomy cabin without the intrusion of a center tunnel.

The Concept #1 features four individual seats (pictured, below). However, Smart officials confirm the production version of the new CUV will offer a standard five-seat layout like that of its perceived rivals. 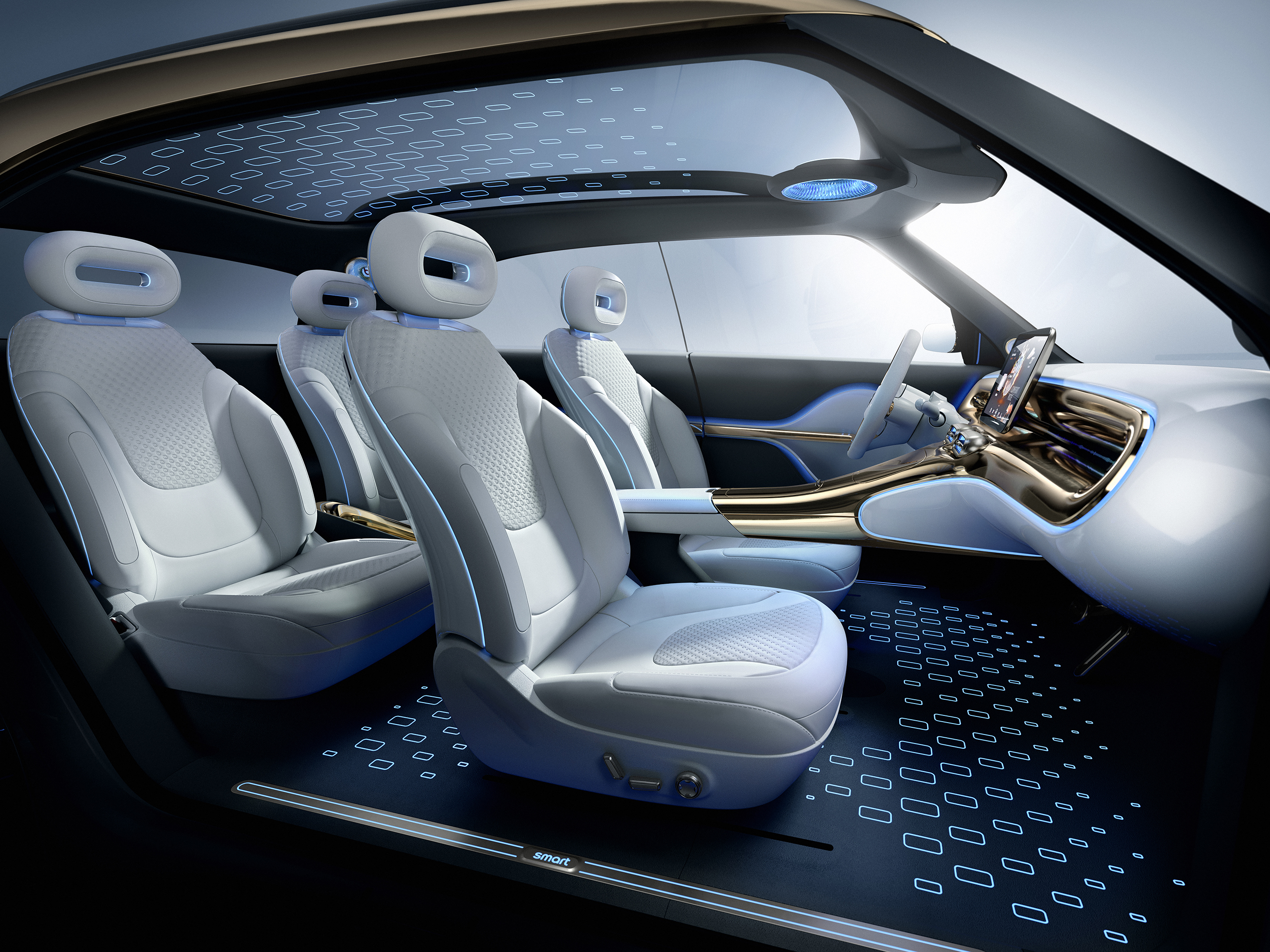 The dashboard merges with a high-set center console and houses a 12.8-in. (33-cm) digital display with 3D graphics and an artificial-intelligence Avatar or graphical representation. A similar setup is planned for the production model, officials from the joint venture company say.

Among the functions to be incorporated into showroom versions of the Concept #1 is a newly developed CPU boasting over-the-air compatibility. Smart says more than 75% of the CUV’s ECUs can be updated remotely on an ongoing basis.

The production version of the Concept #1, known under the internal codename HX11, will be produced at a Geely-run factory in Xi’an in the central Chinese province of Shaanxi. Other Geely models currently produced at the plant include the CMA (Compact Modular Architecture) platform-based Xing Yue L.

Geely and Mercedes-Benz have planned for annual volumes of up to 300,000 for the future Smart model lineup, which officials say includes plans for successor models to the existing Fortwo and Forfour.

Smart previously announced plans for a B-segment CUV under the model name ForMore in 2005.

Based on the modified underpinnings from the second-generation Mercedes-Benz C-Class, it was planned to be produced in Brazil and act as Smart’s entry into the North American market at the time. However, despite the construction of prototypes and a design study, it was later canceled.

Smart refuses to comment on plans to import its new CUV to the U.S. 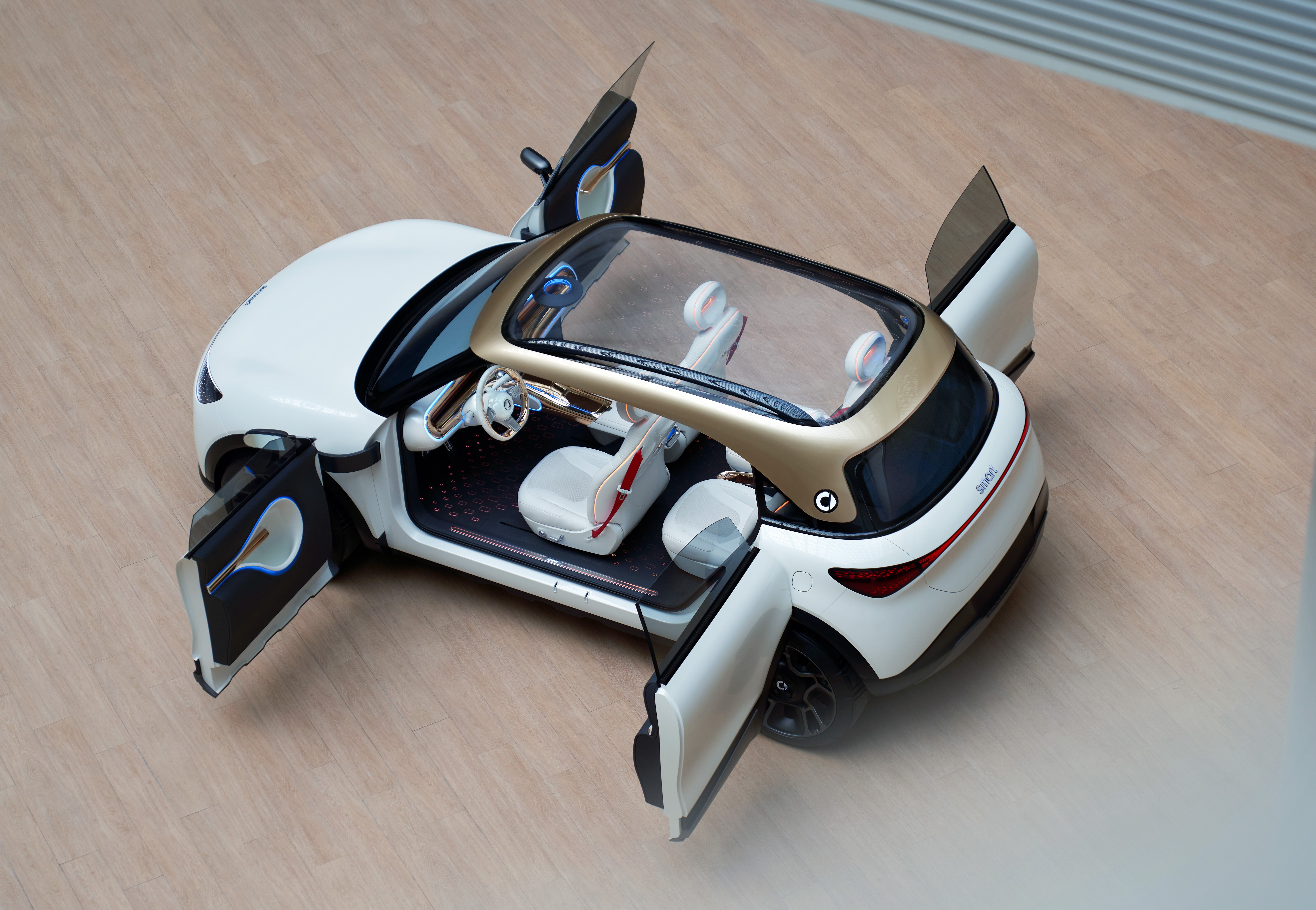