Order a Pizza, Wait for the Robot

Magna has developed a robotic vehicle that has successfully delivered “hundreds of pizzas” in a 4-sq.-mi. area around the Brooklyn Pizza restaurant in Birmingham, MI, since it was put into service on a pilot basis in March.

Magna, one of the world’s largest automotive suppliers and contract manufacturer for brands including BMW, Jaguar Land Rover and Mercedes-Benz, has an eye on new mobility ventures building last-mile delivery vehicles for humble fare such as pizzas.

“Expanding into the growing world of mobility is a key part of our ‘Go Forward Strategy’ that takes Magna beyond its existing technical strengths in automotive and vehicle systems and into entirely new markets and models,” according to Matteo Del Sorbo, executive vice president-Magna International and global lead for Magna New Mobility.

Magna, already a supplier of components for electric vehicles, is collaborating with Cartken, a California-based robotics company which has developed autonomous sidewalk delivery and materials-handling vehicles.

Del Sorbo says Magna has built 50 of the delivery vehicles for Cartken at its facility in Troy, MI. The vehicles use Cartken’s software platform for various applications.

“Our expertise lies in the ability to design, engineer and scale at higher volumes,” Del Sorbo says. “Additionally, we want to explore opportunities to generate additional revenue streams. These moves allow us to enter a space where we could offer mobility as a service, not just as a point-of-sale product.”

In addition, Magna developed a robotic vehicle that has successfully delivered “hundreds of pizzas” in a 4-sq.-mi. (10-sq.-km) area around the Brooklyn Pizza restaurant in Birmingham, MI, since it was put into service on a pilot basis in March.

The goal of the program was to build an all-electric delivery vehicle that would cut delivery costs and reduce carbon emissions in urban areas.  The vehicle also had to be capable of operating on city streets at speeds of up to 20 mph (32 km/h).

“It has a huge future,” Del Sorbo says of the delivery vehicle, noting customer reaction has been very positive.

Muthu Subramanian, project director for the last-mile vehicle, says Magna developed not only the low-speed autonomous driving system for the purpose-built, lightweight robotic vehicle, it also developed the delivery software.

Pizzas delivered by the robot come out warmer than those transported in the insulated boxes used by delivery drivers, he says.

The automated delivery robot has had no issues navigating busy streets in and around Birmingham, an affluent Detroit suburb, Abelfatah says. “The biggest problem is with people leaning out of their cars to take pictures of it,” he says.

Since the delivery robot is experimental, a Magna research team based in nearby Troy always keeps a camera on the vehicle. In addition, a chase vehicle with a human driver follows the robot on each delivery, Subramanian said.

The next phase in the pilot program is to apply Magna’s learnings to a broader range of applications and use cases, Del Sorbo says.

The pizza delivery experiment demonstrates Magna's ability to provide what he describes as a “full-stack solution.”

Magna not only has the technical skills to develop electric and autonomous vehicles from the ground up, but also has the manufacturing knowledge to build them and put them into service on the street, Del Sorbo says. 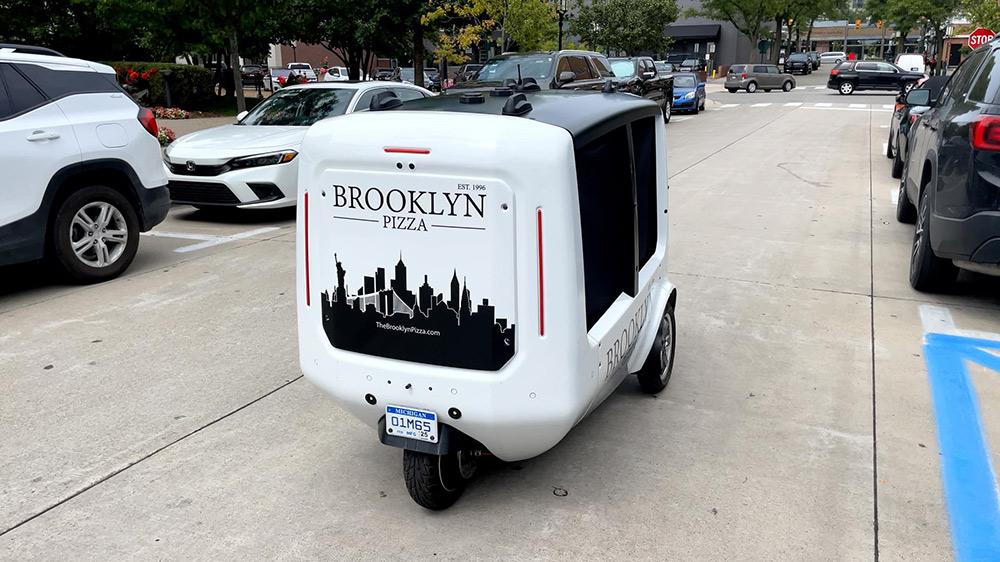 Magna autonomous robot can travel at speeds of up to 20 mph on public streets using cameras, radar, lidar and other hardware.