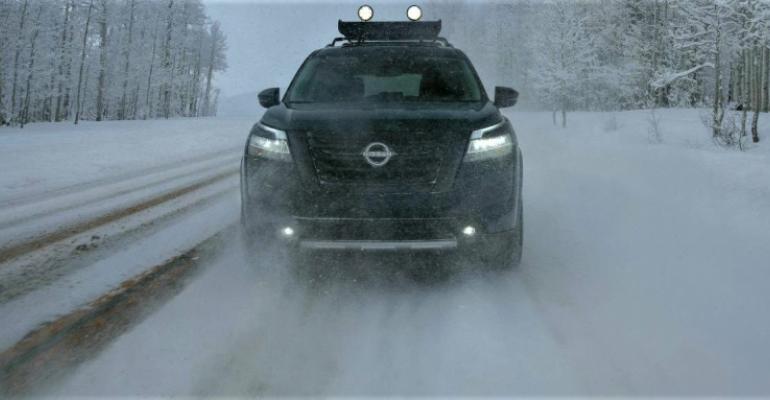 The Japanese automaker re-embraces the more rugged looks and character of the original Pathfinder on the all-new fifth-generation model, out this summer.

Nissan reveals its next-generation Pathfinder CUV, and with it shows a vehicle that the automaker says hews more to the original body-on-frame utility and less to the sleek current-gen model.

“In the last decade or so, the family SUV segment has been going towards more and more comfort-oriented (vehicles),” Ken Lee, senior design director-Nissan Global Design Center, says in a statement. “The shapes are getting softer, more aerodynamic, and overall getting more car-like – which the customers like very much, and it’s very good for their lifestyle.

“However, as we move on to the next generation, we know there’s an opportunity to inject more toughness and more strength to this segment … (and we were inspired by) the original.”

Lee says elements of the fully redesigned ’22 Pathfinder that harken back to the first-gen model of ’87 are a “toughened up” shape and silhouette, a straighter hood and three slots on the hood. The latter feature is more subtle than in the original – hidden at the top of the grille, although still functional, he says. 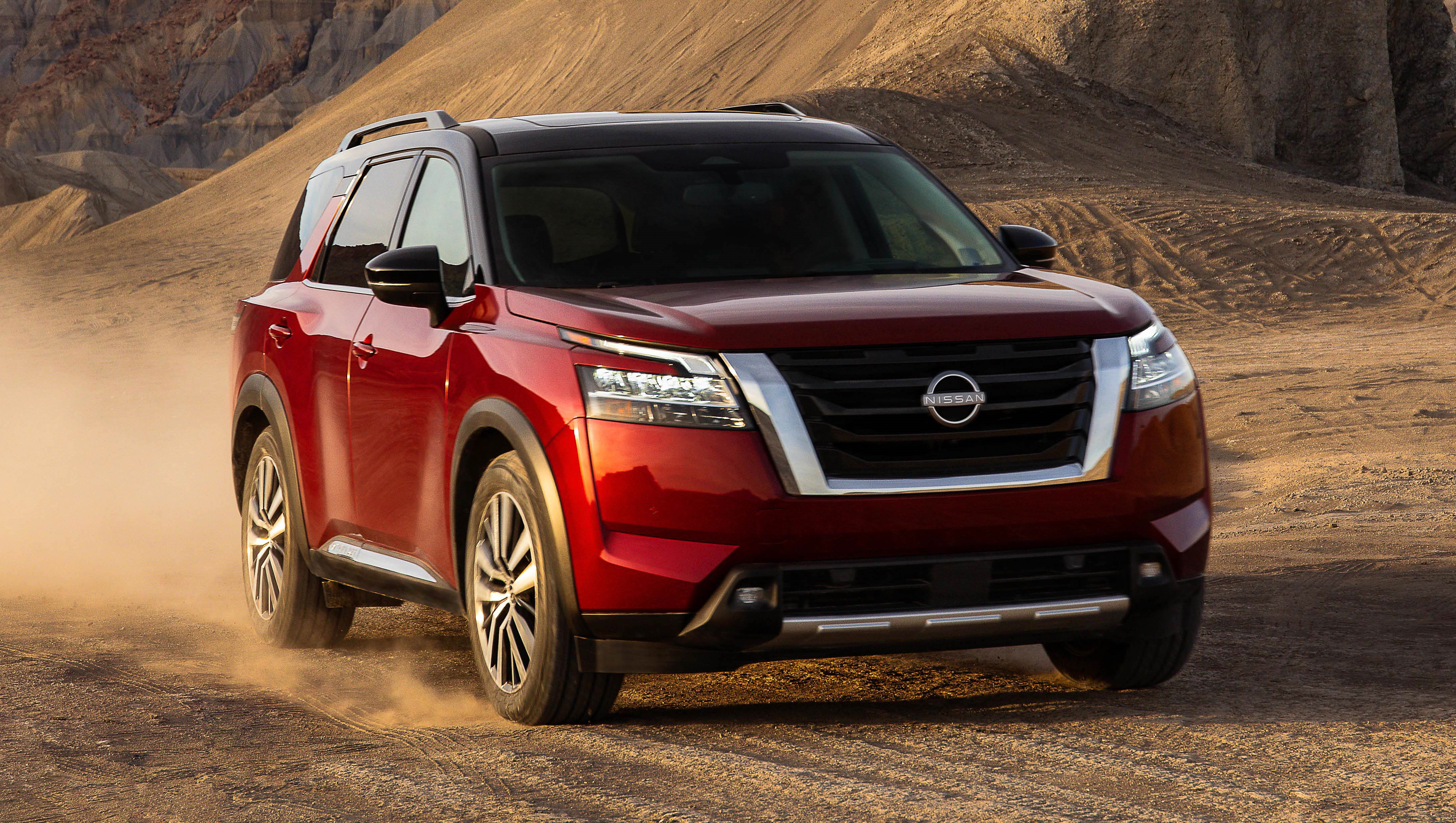 Lee says going with fewer soft lines on the exterior was not only a nod to the earliest Pathfinder, but also was based on a “gut feeling” in terms of where industry trends are headed and wanting to stand out in a competitive segment.

And the segment is competitive. Wards Intelligence’s Large CUV segment, where the Pathfinder lives, saw a 23.3% sales increase last year, almost entirely due to respective 187.7% and 28.2% gains by its newest entrants, the Hyundai Palisade and Kia Telluride. At the same time Pathfinder sales fell 26.0% from 2019, to 48,579.

The Hyundai and Kia models were the No.4 and No.5 best-selling Large CUVs in 2020, behind the Nos.1-3 Toyota Highlander, Chevrolet Traverse and Honda Pilot.

Nissan considers most of those models competition, as well as the Ford Explorer, which Wards places in the Middle SUV segment due to its body-on-frame construction and which tallied 226,217 sales in 2020 in the U.S., about 14,000 sales more than the Highlander earned last year.

The strong and capable elements of the new Pathfinder’s exterior are carried into the interior, Lee says, but with the comfort buyers have come to expect in modern vehicles. A “boldly shaped” instrument panel and door panels recall the exterior design, he says, while soft quilted and stitched surfaces bestow comfort. 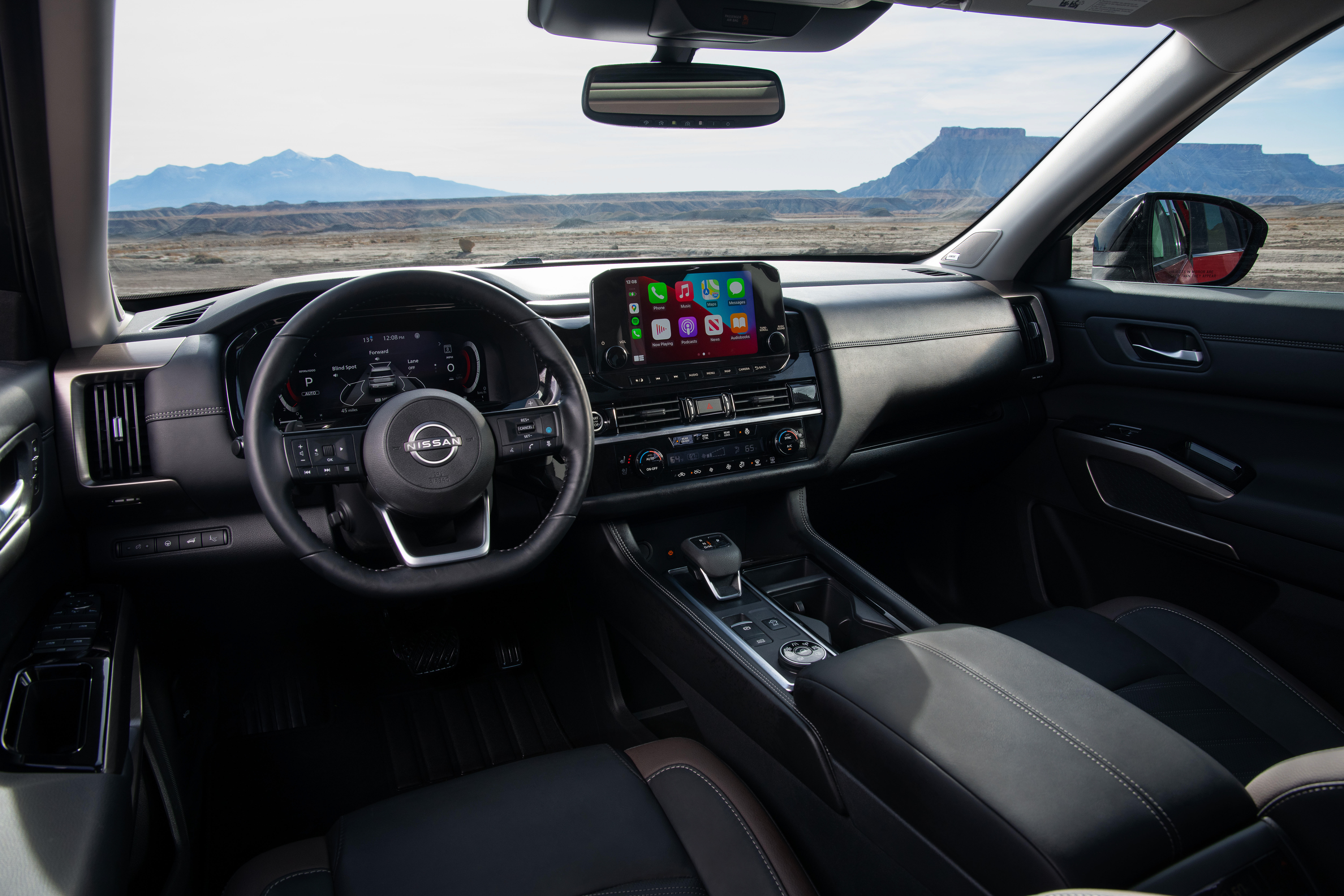 There are seven different interior environments or schemes (athletic footwear and high-tech outdoor adventure gear inspired some of the interior design, Lee says) and three different colors of seating, including a new chestnut premium leather.

Technology-wise the ’22 Pathfinder offers a large central display screen, mounted high on the IP, as well as a Qi wireless charging pad on the center console – not far from a drive-by-wire shifter that frees up space to create a bridge console.

The Pathfinder can seat up to eight passengers and for ’22 has a 7-passenger option via available captain’s chairs.

Wired Android Auto and wireless Apple CarPlay are standard on the ’22 Pathfinder. Robin Moreo, senior manager-product planning for the new Pathfinder, tells media in a Zoom backgrounder Nissan is working on integrating a wireless Android Auto on future vehicles.

A 10.8-in. (27-cm) head-up display is available, as is a 12.3-in. (31-cm) digital gauge cluster, which Moreo says shows CarPlay information, but will not be a mirror image of what’s on the 9-in. (23-cm) touchscreen due to video-feed restrictions stipulated by federal safety requirements.

All Pathfinders get Nissan’s Safety Shield 360 suite of advanced driver assist systems, including automatic emergency braking with pedestrian detection, rear-cross traffic alert, lane departure warning and Nissan’s rear-door alert, designed to alert parents to children in the back seat. Nissan’s more advanced ADAS tech, in the form of ProPilot Assist and featuring steering assist and intelligent cruise control, is on SV and SL grades of the vehicle. New to ProPilot Assist on the Platinum grade is Navi-link, introduced on the new Rogue and using map data to reduce vehicle speed on freeway curves or before exits.

For ’22, Nissan switches to a 9-speed automatic transmission by ZF from the current Pathfinder’s CVT by Jatco.

As for why Nissan made the switch, Moreo tells media that while both CVTs and step-gear automatics have great capabilities, “We listened to our customers and our customers asked us for off-road capability with maintaining our fuel economy.”

An advantage of the new 9-speed auto detailed in Nissan’s media presentation is “smooth, direct vehicle response,” a feature some don’t find present in CVTs due to a rubber-banding sensation, when engine revs don’t correspond to the speed of the vehicle.

Prior generations of the Pathfinder have been bedeviled by customer complaints regarding a shudder with the vehicles’ CVT, leading to some technical bulletins by Nissan to remedy what is perceived as a software issue.

The new CUV still is powered by Nissan’s 3.5L VQ V-6, updated in the current-gen’s ’17 model year with 25% new parts or components, including mirror-bore coating applied to cylinder bores to reduce friction between the piston ring and cylinder wall.

The Pathfinder still offers Nissan’s Intelligent All-Wheel Drive that decides how much torque to send to front and rear wheels. A direct coupling rather than wheel slip determines when to send torque to rear wheels, says Nissan North America Director Mark Snyder, adding the ability to send 50% of the engine’s torque to rear wheels provides “excellent off-road performance.”

Certain grades of the new Pathfinder also have seven terrain or drive modes accessed via a console-mounted dial selector.

Moreo says Nissan doesn’t expect many buyers to take their large CUV off-road, but in customer surveys feedback showed many want the ability to do so, as well as the capability to tow and handle snowy conditions.

For ’22, Nissan adds the child-seat-friendly EZ Flex feature to the driver’s side second-row seat, and retains it on the passenger side, Moreo says. It allows a child seat to remain in place in the second row while accessing the third row.