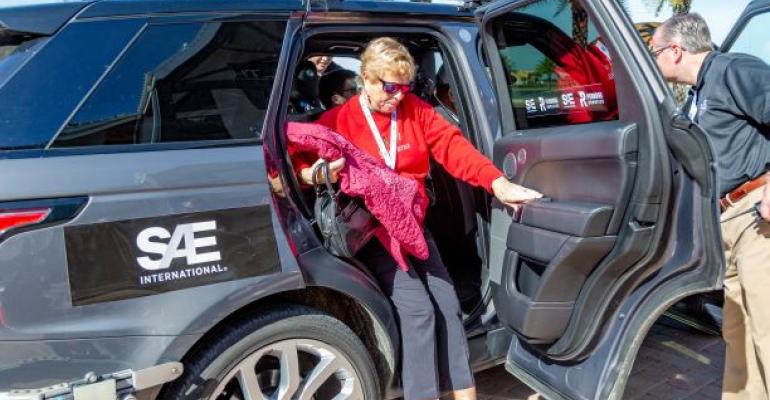 The site is designed to let curious people across the U.S. identify and understand the autonomous vehicles and AV programs in their town. Automakers and suppliers are encouraged to report test locations to NHTSA.

Lidar sensors, camera arrays, drivers not holding the steering wheel: For the average person on the street, these may prompt a head swivel as they pass by.

NHTSA is introducing a new website for people to educate themselves about the autonomous vehicles that might be driving around their neighborhoods.

The agency launched a new AV informational website this week. While it’s still in the pilot phase, once it’s fully up and running the site will let curious people across the U.S. identify and understand the AVs and AV programs in their town. Or anywhere, if they prefer.

Called the AV Test Initiative Tracking Tool, the site opens up with an overview of AV testing locations across the country. There are currently 73 autonomous-vehicle test programs included in the database: 34 shuttle, 24 car, seven delivery robot, five SUV and one each for mixed fleet, heavy truck and “other.”

Information on these programs comes from 10 companies and nine states that have voluntarily submitted information to the database, as well as a few from other stakeholders.

The reason for making this data easy to find and understand is so AVs become more familliar to people who don’t understand if they're safe or how they work, says NHTSA Deputy Administrator James Owens.

“Ongoing transparency will help the public feel safer about this testing in their community, particularly as on-road testing expands in the coming years,” he says. 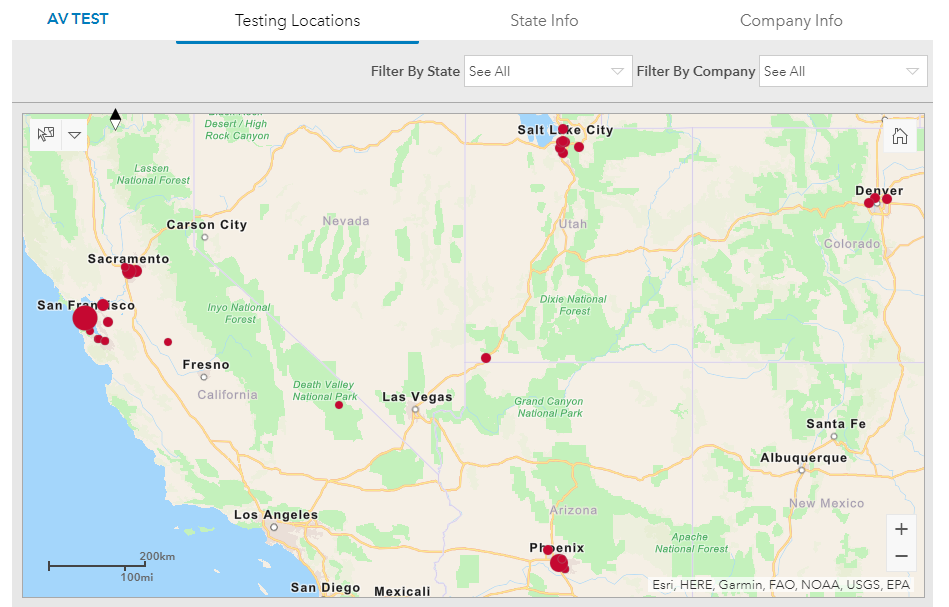 NHTSA map shows most AV testing is being done in southwest U.S.

It's fair to say, however, that 100% transparency is not yet part of the AV Test site, because the database does not currently list accidents. The most famous such incident, in which a self-driving Uber vehicle killed a pedestrian in Tempe, AZ, in 2018, is nowhere to be found; in fact, Uber’s entire test program in the city is not listed.

As with any database, NHTSA’s new site is only as good as the information companies voluntarily submit to the regulator for people to find. Selecting, validating and updating the data is managed by the participants themselves, says NHTSA Chief Safety Scientist Joseph Kolly.

“This tool does not represent all (autonomous vehicle) activity, policy and regulation in the U.S., and will surely change over time as testing activity, the number of participants and government oversight increase and evolve,” he says.”

Despite those caveats, the online, interactive tool is relatively easy to use. Users can simply zoom in to their local area to see what AV test programs are being run there, and then find more details about them such as the number and type of vehicles, what kinds of roads, tracks or sidewalks they’re driving on and who can ride in them. Many of these programs still limit AV riders to company employees, but not all.

Unfortunately, you cannot filter the site by some of these granular details – that is, just by AV test programs that will let the public ride in one of the self-driving vehicles.

You can filter by state or company, though, and there are plenty of links to more information. You also can see the geographic area where AVs are running on public streets, as those are highlighted in red once you zoom in far enough. Exactly what information is available when you click on a particular dot varies, because this information is, again, determined by the participating companies.

The charts on the bottom of the map dynamically adjust to show just the information based on what the map is displaying, which is useful, but the site does not make it clear that this is happening.

Clicking on the home button zooms out to a view of the continental U.S., thus resetting the charts with nationwide information again.

NHTSA representatives say the AV Test site is a work in progress, and it’s an important part of bringing more self-driving vehicles to the public in the future.

“Automated driving systems are not yet available for sale to the public, and the AV Test Initiative will help improve public understanding of the technology’s potential and limitations as it continues to develop,” Owens says.

You can check it out for yourself here: https://www.nhtsa.gov/automated-vehicles-safety/av-test-initiative-tracking-tool