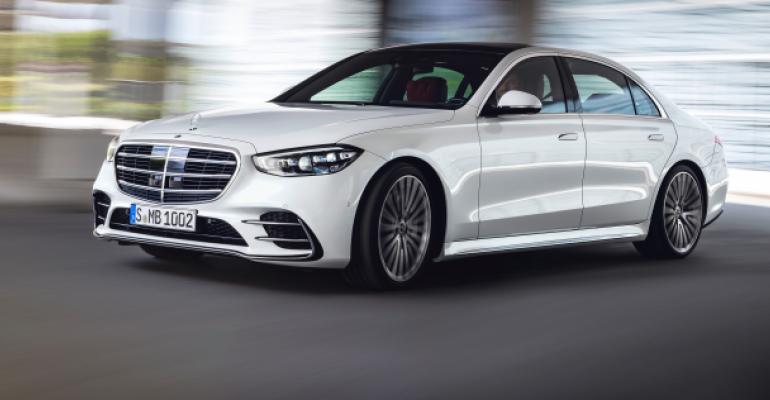 The ’21 S-Class brings a host of technologies that Mercedes-Benz is banking on to re-establish it at the head of the luxury-car ranks among the Audi A8, BMW 7-Series, Lexus LS and Porsche Panamera.

Mercedes-Benz Chairman Ola Källenius reveals the seventh-generation S-Class sedan, describing it as the most technically advanced car the German automaker has ever placed into series production.

Set for North American delivery in early 2021, the 4-door has been comprehensively re-engineered around a new aluminum-intensive body structure and offers a revised range of powertrains, including a new plug-in hybrid unit that is claimed to provide the new S580e with an electric range of more than 62 miles (97 km).

The ’21 S-Class brings a host of technologies that Mercedes-Benz is expecting to re-establish it at the head of the luxury-car ranks against competitors including the Audi A8, BMW 7-Series, Lexus LS and Porsche Panamera.

Through June, Mercedes-Benz sold 4,183 S-Class sedans in the U.S. this year, second only to the Tesla Model S (6,084 units) in the Upper Luxury segment as tracked by Wards Intelligence.

The new S-Class gets an enhanced version of the outgoing sixth-generation model’s Drive Pilot system featuring Level 3 autonomous-driving capability at speeds up to 37 mph (60 km/h).

Although not planned from the beginning of U.S. deliveries, Mercedes-Benz says the new Drive Pilot system, which employs lidar among a range of different sensors, will be introduced to the German market during second-half 2021. It allows the driver to go hands-off for extended periods of high traffic density and what it describes as “suitable sections of highway.”

Another first for the ’21 S-Class is over-the-air (OTA) update capability. It allows Mercedes-Benz to perform regular software updates for a variety of systems without having to visit the dealership. 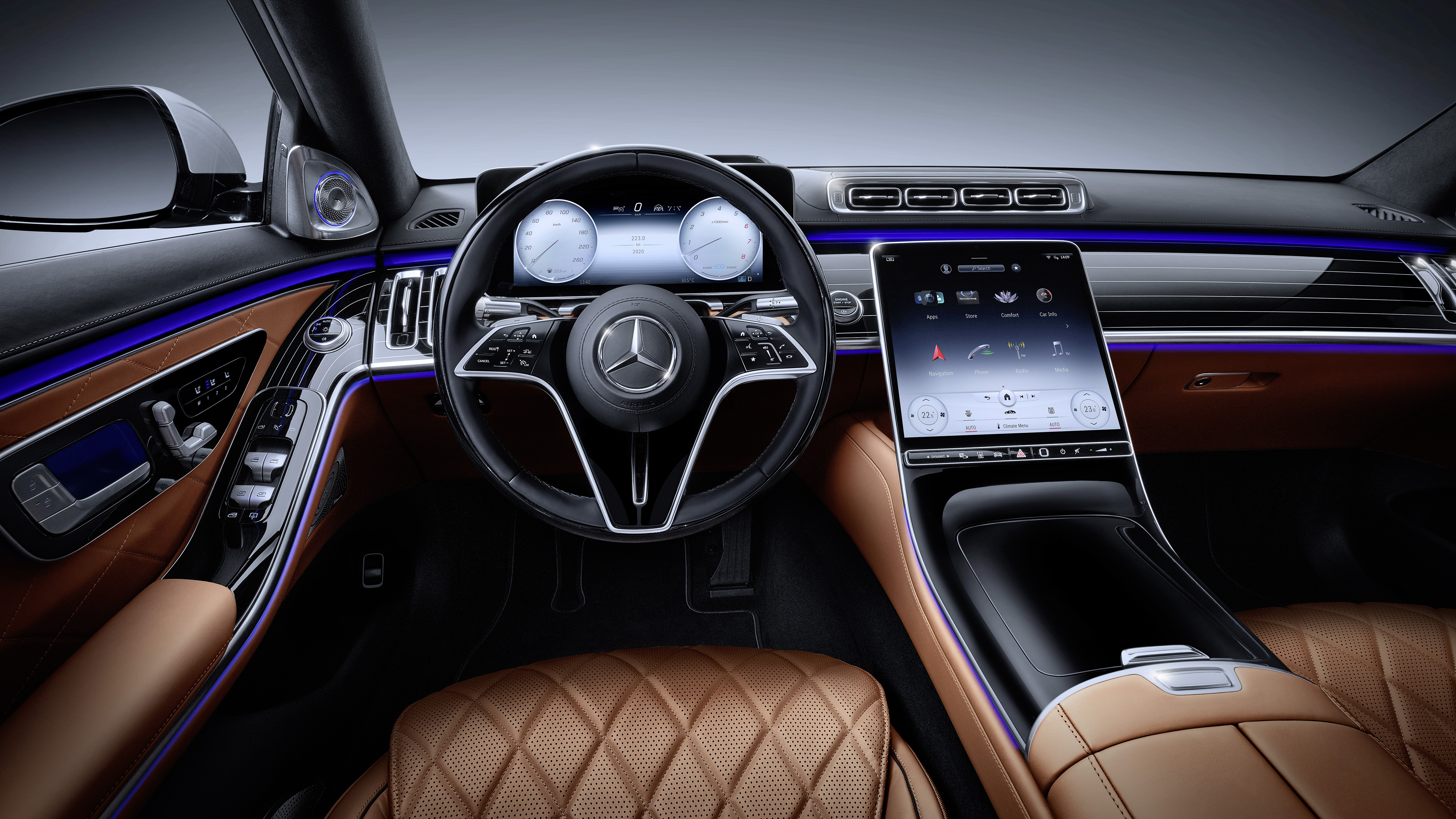 At launch in North America, the new S-Class will be offered with a gasoline inline 6-cyl. carried over from its predecessor. The turbocharged 3.0L mild-hybrid unit develops 362 hp in the S450 4Matic and 429 hp in the S500 4Matic.

Both launch models benefit from electric boosting, with an additional 21 hp provided by an integrated starter motor within the gearbox under acceleration, together with brake-energy recuperation and off-throttle coasting functions for added fuel savings.

More drivetrains will follow, including a 500-hp mild-hybrid version of Mercedes-Benz’s turbocharged 4.0L gasoline V-8 in the S580.

It will be joined in the new S-Class lineup in 2021 by the S580e, featuring the turbocharged 3.0L 6-cyl. and gearbox-mounted electric motor with a combined output of 510 hp and, in combination with a 28-kWh lithium-ion battery, an electric range of more than 62 miles on the WLTP test cycle.

Many of the developments brought to the new S-Class will appear on Mercedes-Benz’s new battery-electric EQ S, which aims to head off competition from the Tesla Model S as well as the upcoming Audi A9 e-tron and BMW i7.

While yet to be officially confirmed, both the existing S-Class Coupe and Convertible are unlikely to be replaced, according to Mercedes-Benz officials, leaving the sedan alone in the S-Class lineup. As with its predecessor, it will be produced in both short- and long-wheelbase guise and sire various AMG, Maybach and Pullman derivatives.

The S-Class’s exterior has undergone an evolutionary redesign for 2021. Smooth surfacing and understated sculpting remain fundamental to its exterior styling, but the new model sports a bolder-looking grille, slimmer headlamps and angular mounted taillamps that extend into the trunklid for the first time.

While the exterior represents an evolution of that gracing the outgoing sixth-generation S-Class, the interior (pictured above)  has been comprehensively redesigned with developments that will be mirrored on other future Mercedes-Benz models, including the upcoming fifth-generation C-Class due to be revealed in December. 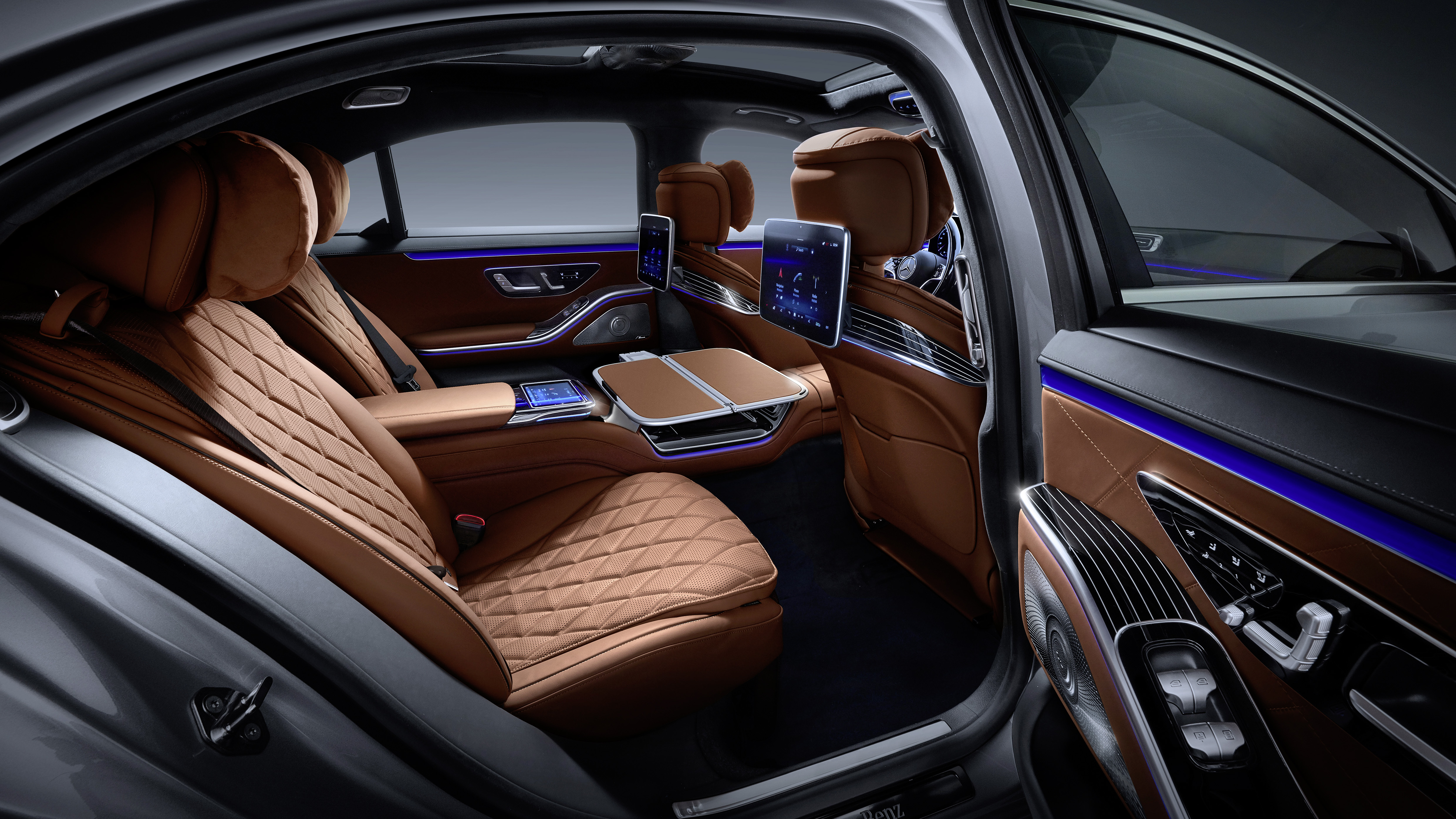 Up front, there’s a new-look dashboard with trim elements including open-pore wood veneer with aluminum inlays and four centrally mounted rectangular air vents in the upper fascia. Key features include a 12.3-in. (31-cm) digital instrument display that comes with an optional 3D function as well as an 11.9-in. (30-cm) portrait-style central digital display that doubles as a center console complete with touch controls for the ventilation.

There are 27 fewer analog controls than before, with the emphasis shifted to swipe, voice control and gesture controls via a further-developed version of its MBUX operating system.

A new head-up display featuring augmented-reality functions is optional, as is a new so-called 4D sound system developed in partnership with Burmester that uses speakers and subwoofers mounted within the front seat backrests.

The rear, meanwhile, receives two optional 11.6-in. (29-cm) touchscreen displays (pictured above)  in the backs of the front seats and the same MBUX operating system as that employed up front; the optional tablet can be used both in and outside the car. Other key developments include a rear-seat airbag that deploys from the back of each of the front seats.

The new S-Class (pictured below) will be produced on a new production line at Mercedes-Benz’s so-called Factory 56 facility in Sindelfingen, Germany.