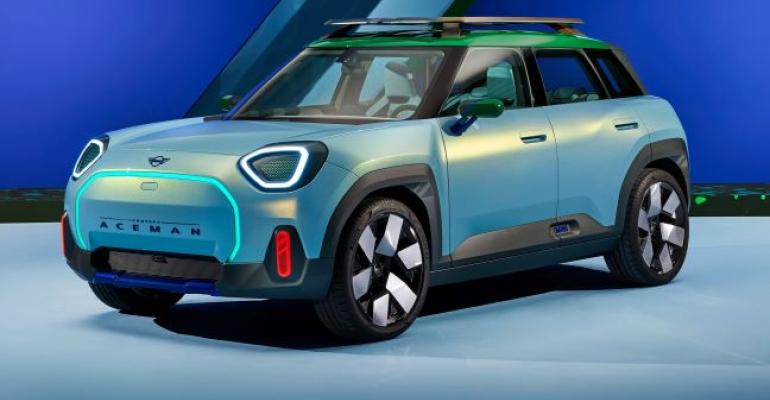 Debuting Aug. 23 at the 2022 Gamescon trade fair in Cologne, Germany, the 5-seater bridges the gap between the next generation of the traditional Mini Cooper hatchback and the upcoming third-generation Mini Countryman.

Together with the Clubman, the Aceman expands the Mini lineup to four individual models offering a combination of traditional combustion engines, plug-in hybrid and all-electric drivelines.

Full details of the electric driveline and mechanical make-up of the Mini are yet to be revealed, though it is planned to be sold with either standard front- or optional all-wheel electric drive as well as a digitally focused interior boasting a range of internet-based services –all aimed at providing the British brand with fresh appeal and sales impetus.

The production version of the Concept Aceman is one of two BEVs being developed in a joint venture between Mini and Chinese automaker Great Wall Motor operating under the name Spotlight Automotive.

Together with a successor to the smaller Mini Cooper E hatchback and future models from Great Wall’s Ora brand, production begins by the end of 2023 at a plant in Zhangjagang in the Chinese province of Jiangsu. Construction of the $660 million factory, with an annual capacity of 160,000 cars, began in 2019.

Both models are based on a new BEV platform that Oliver Heilmer, head of Mini design, says has allowed Mini to subtly alter the two-box silhouette and packaging with a shorter hood and longer interior to create greater space and practicality than a traditional combustion-engine architecture affords (pictured, below). 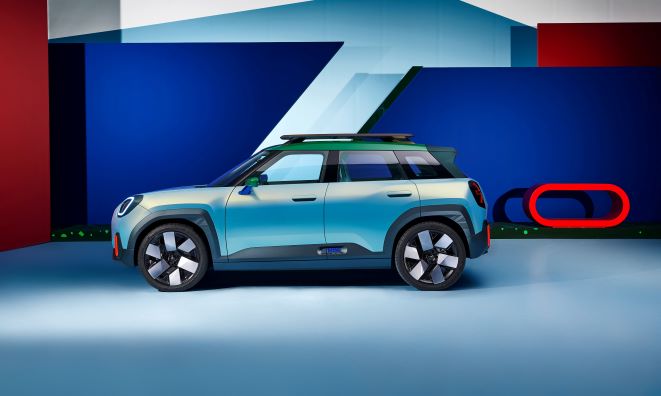 “Electrification allows us to completely rethink Mini design,” he says. “This creates models that take up little space on the road while offering even more comfort, more versatility and more (room) inside than ever before.”

The platform was jointly engineered by Mini parent company BMW and Great Wall.

Despite offering new possibilities in terms of exterior proportions, Mini has drawn heavily on its traditional design lineage for the stylistic detailing of the Concept Aceman, albeit in a newly interpreted form that Heilmer says ensures it is seen as modern but also instantly recognized as a Mini.

“We have reworked all the classic Mini cues but have completely done away with chrome for the exterior. We wanted a cleaner and more contemporary look that would appeal equally to younger and older buyers alike,” he says.

Up front, Mini’s traditional hexagonal grille makes way for a blanked-off octagonal unit with an illuminated surround for a distinctive nighttime light signature. Green LEDs integrated into the upper section light up in a digital interpretation of the Union Jack (pictured, below) as a welcome message and trigger an acoustic tone when you near the CUV. 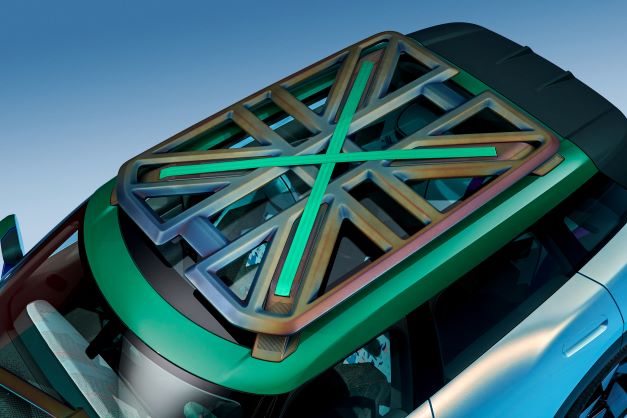 Further outboard, red LEDs are used to mimic the look of oblong-shaped air vents low down within the front bumper, accentuating both the Aceman Concept’s width and height.

A set of technical-looking headlamps departs from the familiar oval shape used on the smaller Cooper, taking on an edgier look inspired by those of the larger Countryman.

Farther back, blacked-out A- and B-pillars provide the Concept Aceman with the floating roof design seen on existing Minis. It is painted in a contrasting color to the rest of the body and supports an aerodynamically optimized roof rack.

The four front-hinged doors are frameless. They’re opened by an electronic mechanism housed within fixed handles, similar to those on the BMW iX.

At the rear, the Concept Aceman receives a hooded window for maximum aerodynamic effect as well as a clamshell-style tailgate – the latter housing newly shaped taillamps with a new interpretation of the LED arrow graphics as used by today's Minis.

The oblong-shaped red LED graphic elements seen up front also feature within the lower section of the rear bumper, which is fitted with a diffuser to smooth underbody airflow.

Inside (pictured, below), a high-set dashboard largely devoid of physical controls introduces a digitally focused design that Heilmer says will be similar on both the production version of the Concept Aceman and the successor to the Mini Cooper E. 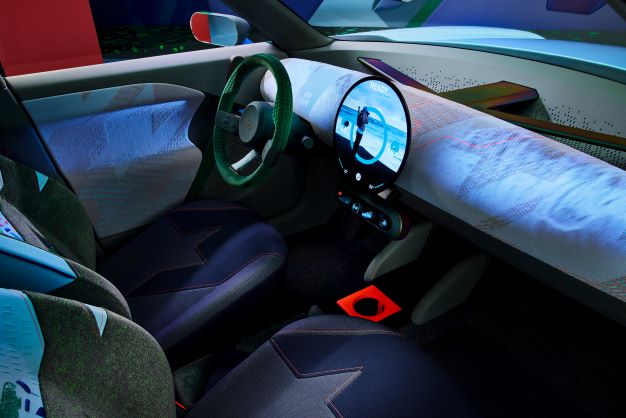 Trimmed in recycled synthetic fabric, it extends over the width of the cabin and supports a large, round OLED central display housing the traditional functions of the instrument cluster and infotainment system as well as online services and a range of synthetically produced drive sounds.

The control system is based on the latest generation of the Mini Operating System, which for the first time is built on a Google Android Open Source Project software stack. It offers three different graphic modes, including “personal,” which Mini says will allow owners of the production Aceman to upload digital images to be used as a screen saver.

Below the Concept Aceman's central display is a small panel. It houses a set of toggle and rotary dials used to start the Mini as well as operate the electronic parking brake, gear selector, drive modes and audio system volume.

“We prominently showcase the central controls,” Heilmer says. “The design is all about giving occupants an immersive experience.”

A similar layout is planned for the next Mini Cooper E, says the head of Mini design.

As with the dashboard, the front shell-style front seats and rear bench seat are upholstered in recycled materials, which Heilmer says will play a more prominent role in future Mini models.

“We have consciously moved away from leather towards more environmentally friendly recycled materials that we want to use in production models,” he says.

As with the new Mini Cooper E, the production version of the Concept Aceman will offer buyers a choice of electric drivelines: a front-wheel-drive setup making about 180 hp in combination with a 40-kWh battery, and 220 hp with a 50-kWh battery.

An all-wheel drive-model with dual motors, one operating the front wheels and another at the rear, is also planned. 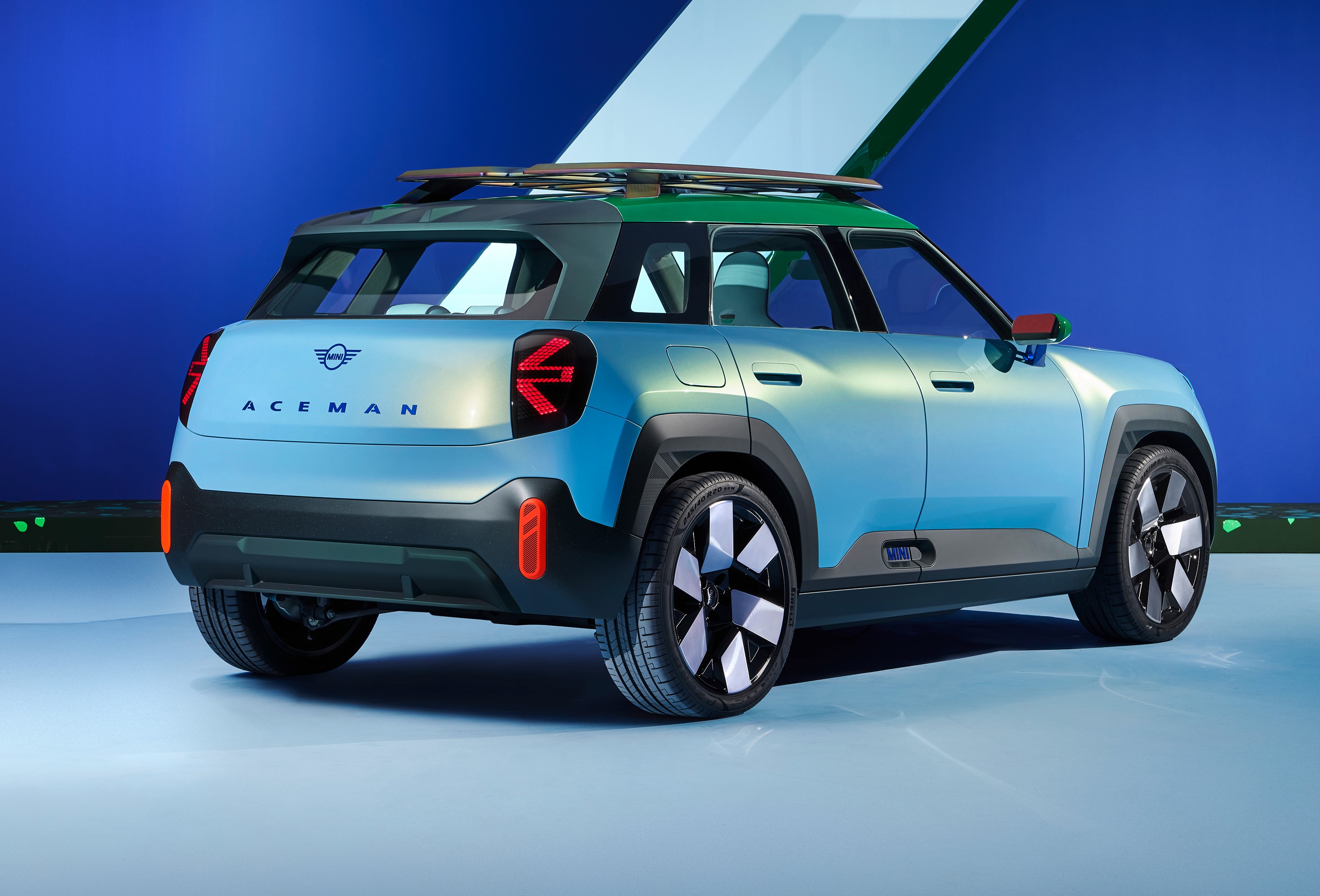