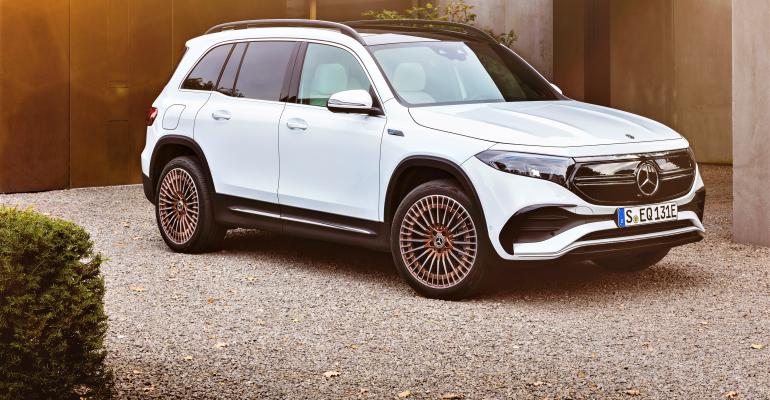 The Tesla Model Y-rivaling electric CUV is planned for U.S. sale in 2022.

Mercedes-Benz unveils its EQB at the 2021 Shanghai auto show ahead of a planned start to North American sales of the electric-powered CUV in 2022.

Designed to rival the Audi Q4 e-tron, BMW iX3, Volkswagen ID.4 and Tesla Model Y, the latest of Mercedes-Benz's EQ models is based on the GLB, alongside which it will be produced at Mercedes-Benz’s plant in Kecskemet, Hungary, for the U.S. market.

Full details are yet to be revealed, though Mercedes-Benz confirms it will launch sales of the EQB in North America with the top-of-the-range all-wheel-drive EQB350 4Matic model. It uses two electric motors – an asynchronous unit mounted underneath the hood and a synchronous unit housed within the rear axle – with a combined output of 288 hp.

Other models are planned to be added to the lineup, including the front-wheel-drive EQB250 running a front-mounted motor with 188 hp and the all-wheel-drive EQB300 4Matic with the same dual electric motor setup as the EQB350 4Matic with “around 241 hp,” Mercedes-Benz says.

The EQB350 4Matic’s electric motors are combined with a 66-kWh lithium-ion battery produced by Mercedes-Benz sister company Deutsche Accumotive and housed within a modified floor structure as well as underneath the rear seat. The same battery used by the smaller EQA hatchback, it can be charged at up to 11 kW on an AC system and at up to 100 kW on a DC system.

Mercedes-Benz is holding back on many details of its new model until closer to its European introduction later this year. However, officials have told WardsAuto the initial all-wheel-drive EQB will boast a 0-62 mph (100 km/h) time of “around 6.0 seconds” together with combined consumption of 19.2 kWh and a range of 260 miles (419 km) on the WLTP test cycle.

As with the EQA, with which it shares key elements of its electric driveline, the EQB receives its own individual exterior styling elements, including a blanked-off grille, reshaped headlamps, a redesigned front bumper, reworked taillamps with a full-width light band and a new rear bumper housing the license plate. The wheels range from 18 to 20 ins. in diameter.

Alongside the standard appearance, customers will be able to order the EQB with an optional AMG line styling package with uniquely styled bumpers and 20-in. wheels among other detailed changes.

Inside (above) are unique digital instrument graphics and altered trims, including a new rose gold color for the aluminum-look air vents and dashboard trim, as well as ambient lighting. The remainder is shared with the GLB.

As with its combustion-engine sibling, the EQB will be sold with the choice of either a five- or seven-seat interior layout. However, modifications made to its MFA platform to accommodate its electric driveline and power electronics system have reduced trunk capacity in the five-seat version by 2.6 cu.-ft. (74 L) over the GLA at 17.5 cu.-ft. (496 L). With the rear seats folded away the trunk capacity increases to 60.4 cu.-ft. (1,710 L).

The EQB originally was planned to be produced at the Mercedes-Benz-owned Smart city car factory in Hambach, France. However, a sale of the site to Britain’s Ineos, which plans to assemble its new Grenadier off-road vehicle there, forced a shift to the Kecskemet site in Hungary, which currently produces the GLB, CLA and CLA Shooting Brake.