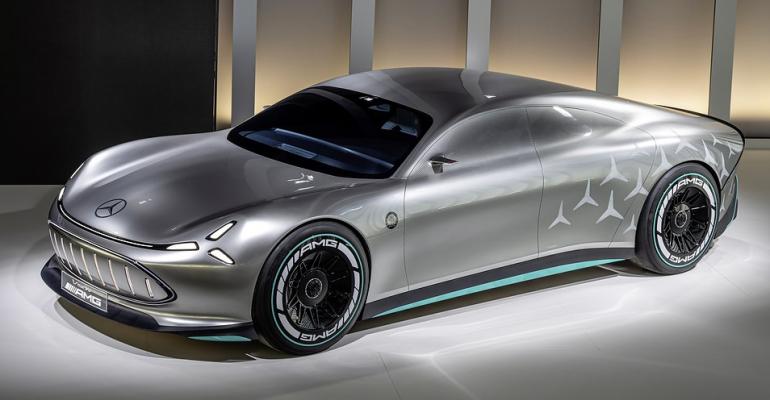 Porsche’s Taycan Turbo is in the sights of Mercedes-Benz and its performance battery-electric sedan based on the Vision AMG. The hot new model arrives in 2025.

ROQUEBRUNE-CAP-MARTIN, France – Mercedes-AMG unveils the Vision AMG, previewing its plans for a battery-electric performance sedan that will serve as a technological halo for the German automaker’s fast-growing EQ electric-car sub-brand.

The low-slung liftback concept, revealed at the company’s 2022 Capital Markets Day presentation in southern France, provides the first clues to the size, appearance and detailing of an advanced rival of the Audi e-tron GT and Porsche Taycan Turbo.

The production version, due in 2025, will be the first in a series of standalone AMG models based on the company’s dedicated AMG.EA electric-car platform. The structure uses a compact battery installation designed to allow a considerably lower and more sporting shape than Mercedes’ existing EVA electric-car platform. That architecture underpins the EQS and EQE sedans as well as the newly unveiled EQS SUV and upcoming EQE SUV.

“We’ve taken full advantage of the new platform in both the design and proportions,” says Robert Lešnik, head of Mercedes-Benz exterior design. “The Vision AMG shows what we are planning: a low and sleek sedan with outstanding aerodynamics and the space to accommodate four adults in comfort.”

The latest in a series of concepts pointing at Mercedes’ BEV future draws heavily on the distinctive lines established on the wind-cheating Vision EQXX. That prototype recently established new levels of efficiency in a 626-mile (1,007-km) development drive from Stuttgart to Nice.

Key exterior design elements for the Vision AMG, which features a color scheme similar to Mercedes-AMG’s 2022 F1 race car, include a blanked-off version of AMG’s signature Panamericana grille with an illuminated frame and vertical bars. The headlamps of the new concept preview a star design graphic that Lešnik says will be used to distinguish the AMG model. As on other Mercedes models, they are joined by a horizontal light band across the leading edge.

“Without the concerns of packaging an internal-combustion engine within the front end, we’ve been able to make the hood very low and add greater volume to the fenders. The AMG.EA platform gives us lots of freedom in terms of design,” he says.

Accentuating the sporting lines is an extended dash-to-axle ratio, comparatively low cowl, heavily raked windscreen, a shallow greenhouse that tapers toward the rear and a plunging roofline.

Mercedes says the production version of the Vision AMG will have frameless doors as well as a large liftback similar to that planned for the upcoming second-generation GT Coupe.

The flanks feature fuller forms with smooth surfacing and larger wheelhouses to accommodate wheels up to 22-ins. in diameter. Substantial rear haunches, meanwhile, help underline the wide-track stance, giving it a solid infusion of visual muscle.

Most controversial of all is the Vision AMG’s abruptly ending rear end. It features a long overhang, six illuminated “electric tailpipes” (pictured, below) and a multi-channel diffuser. The round red tailpipe graphics of the concept will be reflected in the taillamp design of the new AMG model, Wards is told. 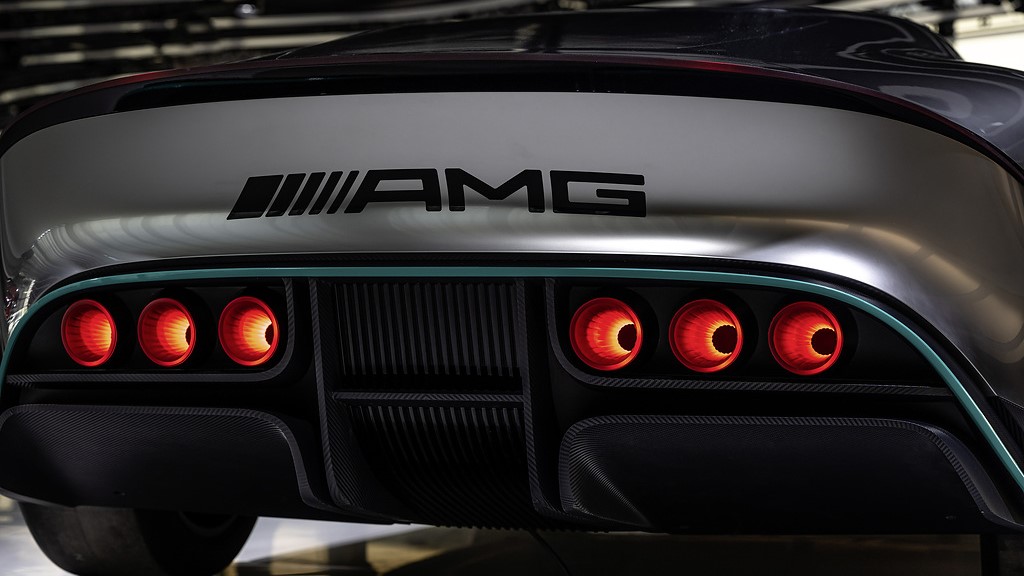 As on the Vision EQXX, active aerodynamics will play a key role with a rear spoiler that deploys to increase downforce at speed among other functions.

The cabin of the Vision AMG sits well within the prominent fenders and tapers backwards. The production model is expected to feature low-set front seats in combination with a dashboard featuring a full-width Hyperscreen display.

Unlike Mercedes’ EVA platform, which boasts a completely flat floor, the AMG.EA structure has been designed to accommodate footwells in the rear, with elements of the battery housed underneath the rear seat.

“This allows for greater space and comfort in the rear,” says Lešnik. “We’ve created a very low car but with a long wheelbase. It will be a proper four-seater.”

The dedicated AMG.EA performance BEV platform features a cell-to-chassis design with the battery pack forming part of the load-bearing structure, giving the production version a lower center of gravity than any previous Mercedes model.

Propulsion details are under wraps, but the automaker has confirmed its purchase of English company YASA, whose electric motors will be used exclusively in the AMG.EA platform.

YASA, which now operates as a wholly owned subsidiary of Mercedes, specializes in axial-flux motors. They are claimed to offer greater efficiency and power at a lower weight and more compact size than the radial units used by Mercedes’ existing range of EQ-branded electric models.

“With higher power density and continuous torque delivery, we will redefine the future of driving performance,” says Philipp Schiemer, CEO of Mercedes-AMG. “We’re developing everything from scratch.”

AMG’s clear aim is to match the performance of the Porsche Taycan Turbo S, powered by dual electric motors manufactured by Italian firm Magneti Marelli. The Porsche motors produce a combined 751 hp and provide it with a claimed 0-62 mph (100 km/h) time of 2.8 seconds.

Mercedes confirms it will use a new silicon-anode material from California-based Sila in production models from 2025 onwards.

In an earlier statement, Mercedes said the silicon anode from Sila offers a 40% improvement in energy density over existing graphite anodes. This allows for a more compact battery installation together with the advantage of vastly improved range.