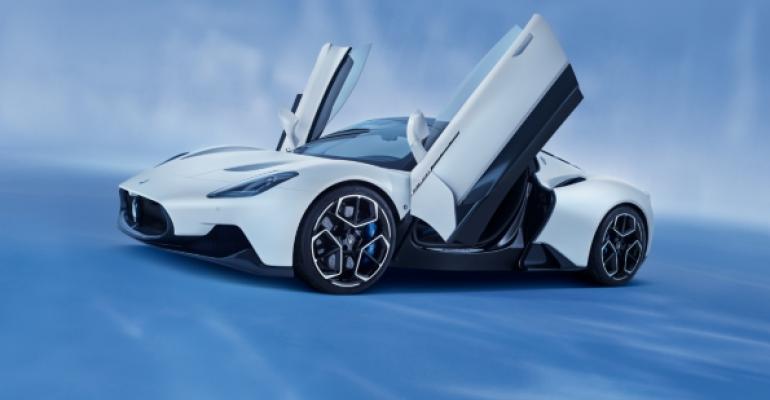 Maserati says production of the MC20 will begin by year’s end, with a starting price of $210,000. The 621-hp “Nettuno” V-6 will be the first Maserati with an engine built entirely in-house.

Maserati is ready for the future.

More than 10,000 people watched the company's flashy online reveal live from its home in Modena, Italy, for the 2021 MC20 Coupe, the brand's first new supercar since 2004.

There’s no question the MC20 takes some cues from 2004's MC12, the 12-cyl., low-volume model that brought Maserati back to racing in the FIA GT Championship series.

While the new supercar pays homage to a fast-paced past, the company is relentlessly focused on what’s to come with one overwhelming message: The MC20 is a new car with a new engine for a new era.

The MC20 finds a home as the flagship of the company's limited lineup – joining the Ghibli, Levante, GT Convertible and Quattroporte – and it doesn’t bash you over the head with strong “look at me” styling.

Instead, the clean and sleek supercar seems to find meaning in the useful marriage between form and function.

Maserati says it took its team about two years to design the MC20 using a Virtual Vehicle Dynamics Development system that allowed the engineers to complete 97% of the necessary dynamic tests to be done on computer. The rest were done on racetracks and different kinds of roads. 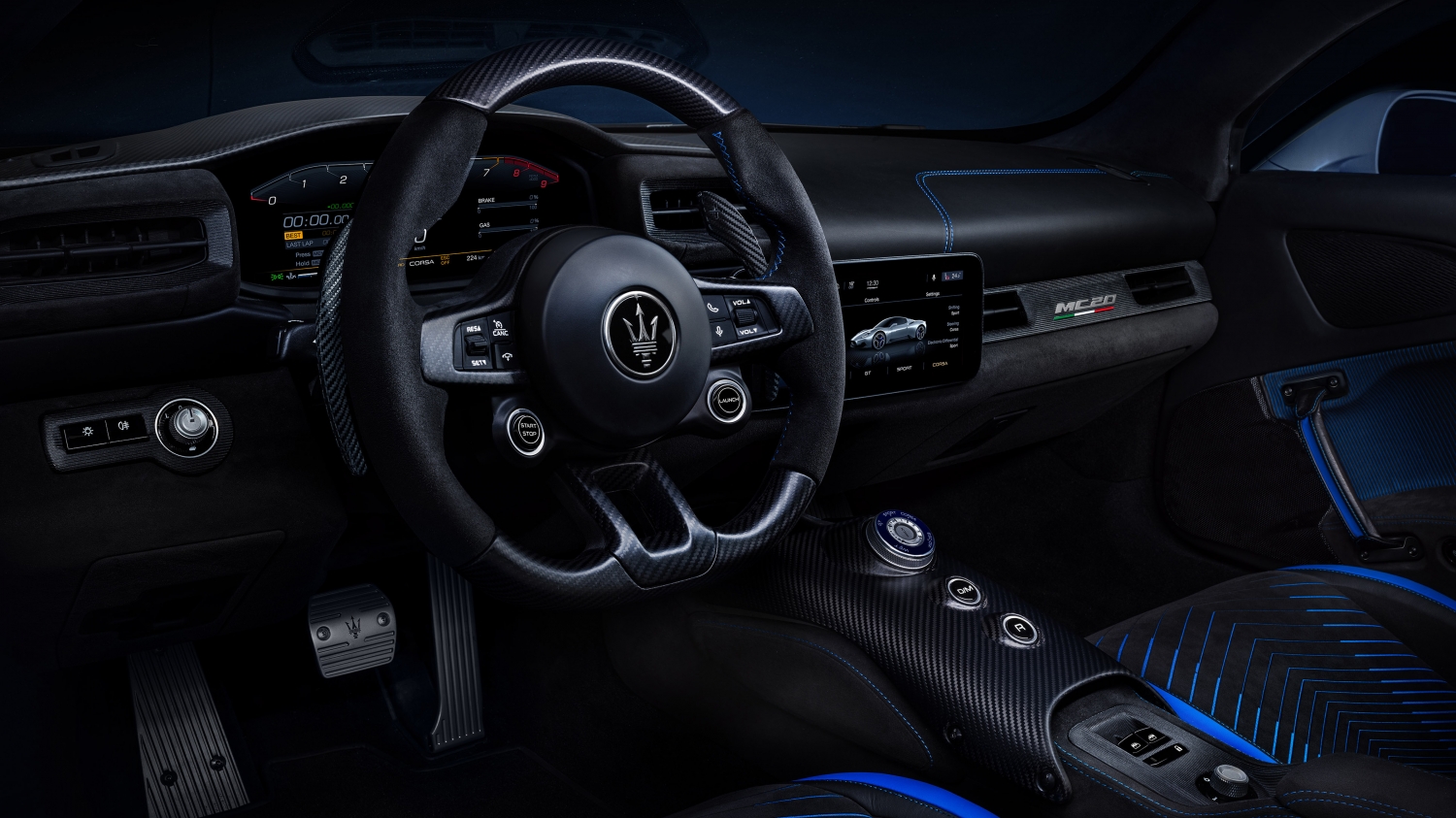 As is proper for a sports car like this, the MC20's doors open in butterfly fashion, and Maserati says that mechanism helps the car reach an aerodynamic drag coefficient under 0.38.

The core of the MC20 is a lightweight carbon monocoque tub that was developed with help from race car chassis expert Dallara. Six new exterior paint colors will be available on the MC20, along with eight seat options.

You can get a 12-speaker Sonus Faber premium sound system as an option, and two packages will be available.

There's a full exterior carbon package that adds dark exhaust tips and a number of carbon-fiber components: front splitter, rear diffuser, hood and sill inserts under the door and on the fenders. There’s also an interior carbon package that adds column-mounted paddle shifters, a cluster cap and door sills all made from the pricey, lightweight material. A carbon-fiber engine cover, roof and spoiler are offered as well, but the spoiler won't be available until the end of April 2021. Another feature, blindspot alert, will not be available until September 2021. 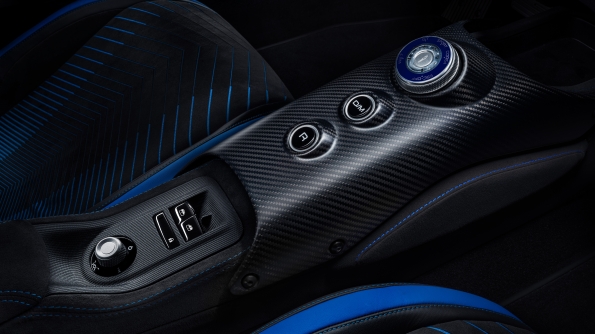 Supercar builders strive for numbers like these, but Maserati says the MC20 highlights a change in the company's recent past because it will be the first Maserati with an engine built entirely by Maserati.

All this power and speed won't come with low emissions – at least not yet – as the MC20 is expected to get about 20 mpg combined (11.6 L/100 km) on the WLTP test standard used in Europe. EPA numbers will come in due time.

There’s more on the horizon, too. While the 12 in MC12 referenced the number of cylinders, the MC20 stands for Maserati Corse 2020 for the year that kicks off the brand's new era (for Corse, read "racing"). Perhaps the biggest change will be the brand’s powertrain direction.

Maserati CEO Davide Grasso hints at where the company is headed during the online reveal.

“At Maserati, our future is bright,” he says. “All of our new models will be electrified. … Maserati will reach Level 3 of autonomous driving and the most advanced connectivity systems.” The company also says the MC20 announces it intends to return to the world of racing.

Electrifying a powertrain can mean many things, but Maserati clearly states the MC20 was designed to enable not just future convertible versions but also a “full electric power” model that will launch after the Nettuno-powered one.

For now, though, Maserati is taking orders for the first batch of MC20s with a starting price of $210,000 and says it will start production at the end of 2020. 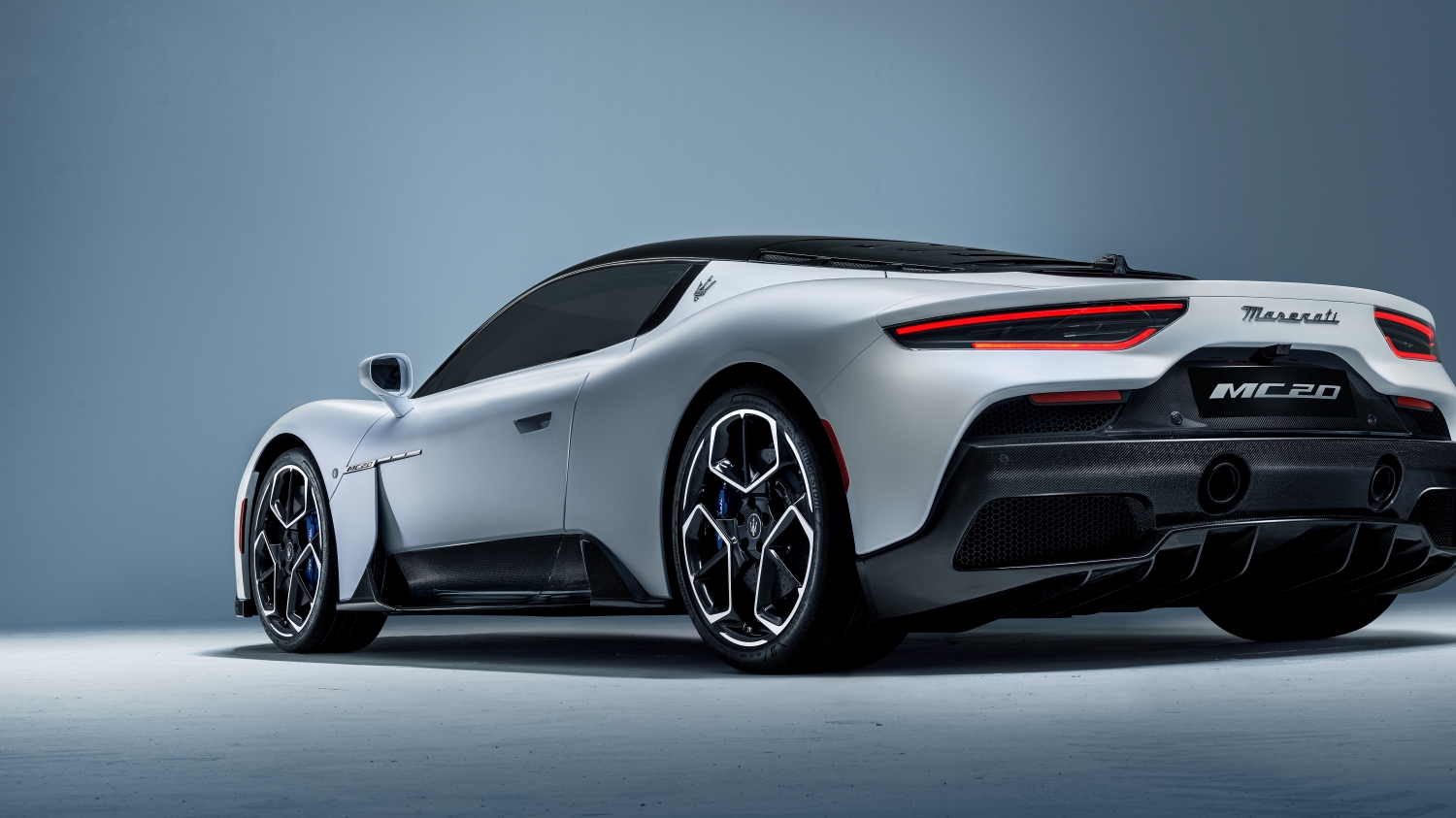