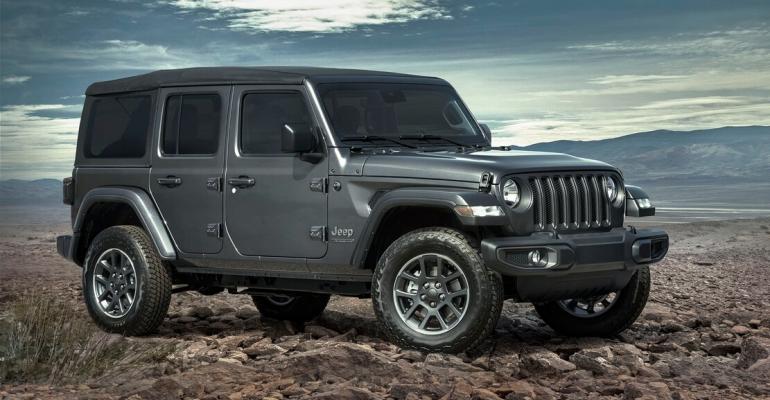 In April the automaker began sales of a special Jeep Wrangler 80th Anniversary Edition. It will be followed in the fourth quarter by the fifth generation of the fullsize Grand Cherokee SUV and updated Compass small CUV.

Jeep expands its Russian lineup this year by launching at least three new models in the local market.

In April the automaker began sales of a special Jeep Wrangler 80th Anniversary Edition. By the fourth quarter it will officially launch the fifth generation of the fullsize Grand Cherokee SUV, the best-selling Jeep model in Russia.

The Grand Cherokee first will debut with three rows and a long wheelbase, followed by a two-row, standard-wheelbase model. The previous generation of the SUV was available in Russia with 3.0L, 3.6L and 5.7L gasoline engines. The price started from RR3.49 million ($47,700).

Also in the fourth quarter, Jeep will begin Russian sales of its updated Jeep Compass small CUV. Technical specifications of the new model have not been disclosed. So far, it has only been available with 2.4L engines making 150 hp or 175 hp with a 9-speed automatic transmission and all-wheel drive.

Jeep halted Russian sales of the Cherokee at the beginning of the year although its certificate, similar to an import license, was valid until the end of summer. Prices for the midsize CUV ranged from RR2.3 million-RR3.4 million ($31,500-$46,500). According to Russia’s Autonews magazine, only 2,400 Cherokees were sold in Russia over the previous six years.

Besides the Wrangler, Grand Cherokee and Compass, the Jeep Renegade small CUV also is sold in Russia.

Jeep will serve as the flagship brand for parent automaker Stellantis in Russia, although only 670 units had been sold there through the year’s first five months, according to Wards Intelligence data.

Stellantis in January denied media reports it planned to discontinue the Chrysler brand in Russia as sales continued declining from their 2008 peak of 1,425 units.

Just 36 units of the only remaining Chrysler model in Russia, the Pacifica minivan, were sold in 2020. Sales of the Chrysler 300C fullsize sedan were halted in 2012.