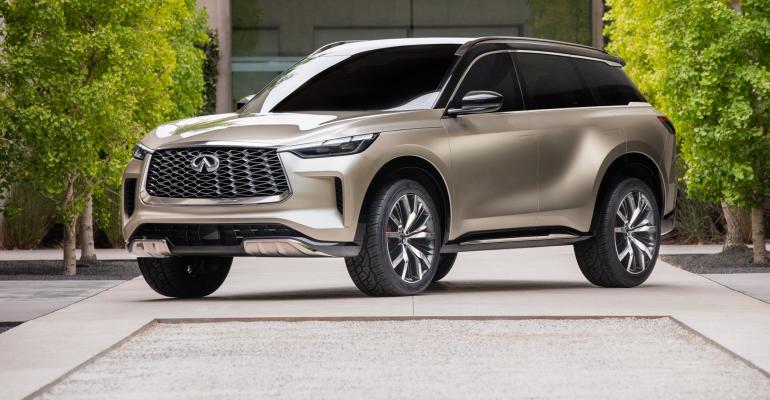 Production version of QX60 Monograph due in 2021.
Vehicles

Instead of just going with a now-standard video-based reveal, Infiniti embraces the multimedia route and adds an augmented-reality experience that lets interested fans “place” a QX60 Monograph on their street or driveway.

Despite launching the new QX60 Monograph from Yokohama, Japan, Infiniti is offering you the new SUV right in your driveway. The catch, as with so much taking place in 2020, is that the potentially cool driveway moment will only happen virtually.

Instead of just going with a now-standard video-based reveal, Infiniti embraces the multimedia route and adds an augmented-reality experience that lets interested fans “place” a QX60 Monograph on their street or driveway.

If you want to pretend you have the new SUV parked outside, Nissan’s luxury brand offers a QR code at the end of its online reveal presentation that allows people to get the app where the SUV is available to download.

Whether you see it through a screen, or perhaps in person at the 2020 Beijing auto show, the QX60 Monograph is meant to show the direction Infiniti is headed with a new production three-row luxury SUV that it will reveal sometime in 2021.

The future QX60 will share proportions and design elements with the Monograph edition, and to emphasize this aspect, the designers didn’t bother to create an interior for the concept vehicle, instead focusing on its wide stance and determined horizontal shoulder line.

You can no longer tell at first glance that the QX60 is an upgraded Nissan Pathfinder.

“We raised the visual center of gravity, giving it a strong, straight shoulder line that carries through to the hood, with a higher, more prominent grille and longer-looking cabin to deliver a sense of muscularity and a commanding presence,” says Alfonso Albaisa, Nissan senior vice president-global design.

Compared to the current 2020-model QX60, the Monograph slims down the LED headlights and increases the noticeable curves on the hood. The lights use Infiniti’s “digital piano key” lighting and turn on with an opening sequence that expands outward from the glowing brand logo in the center of the grille.

The front and rear wheel arches are more defined, with the two-tone design creating a sort of reflection arch in Infiniti’s provided photographs. The grille is larger but still dominated by the center logo, and fog lamps have been swapped out for vertical side air intakes. 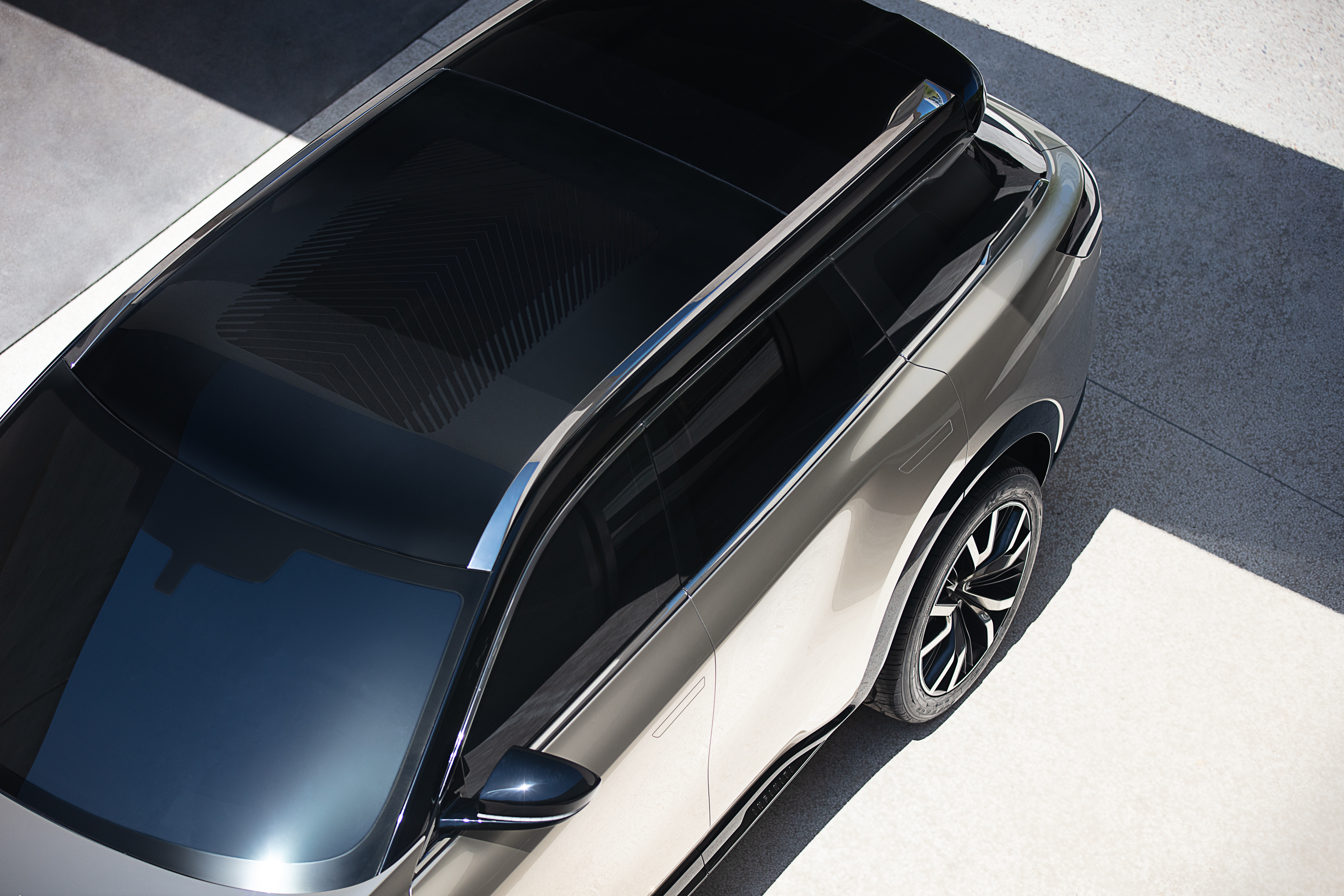 The QX60 Monograph’s A-pillar blends into low-key roof rails that then themselves give way to a subdued gloss-black rear roof spoiler.

The entire roof (left) is made up of this gloss-black surface, letting the platinum paint on the sheet metal stand out. This is perhaps most noticeable from the side, where the rear wheel arches emerge from the side panel in an elegant way.

The rear view, too, keeps things mostly simple, with tinted taillights that act as a visual wraparound when they're not lit up. All in all, it’s a cleaner SUV, sleekly updating what an Infiniti can look like in the 2020s.

Exactly what the new edition will look like could change between this reveal and launch, because Infiniti says the proportions and design elements in the Monograph are “likely” – but not guaranteed – “to follow the SUV into production.”

Even with the newfangled virtual reveal, it looks like Infiniti is rolling with the classic “stay tuned” ending. 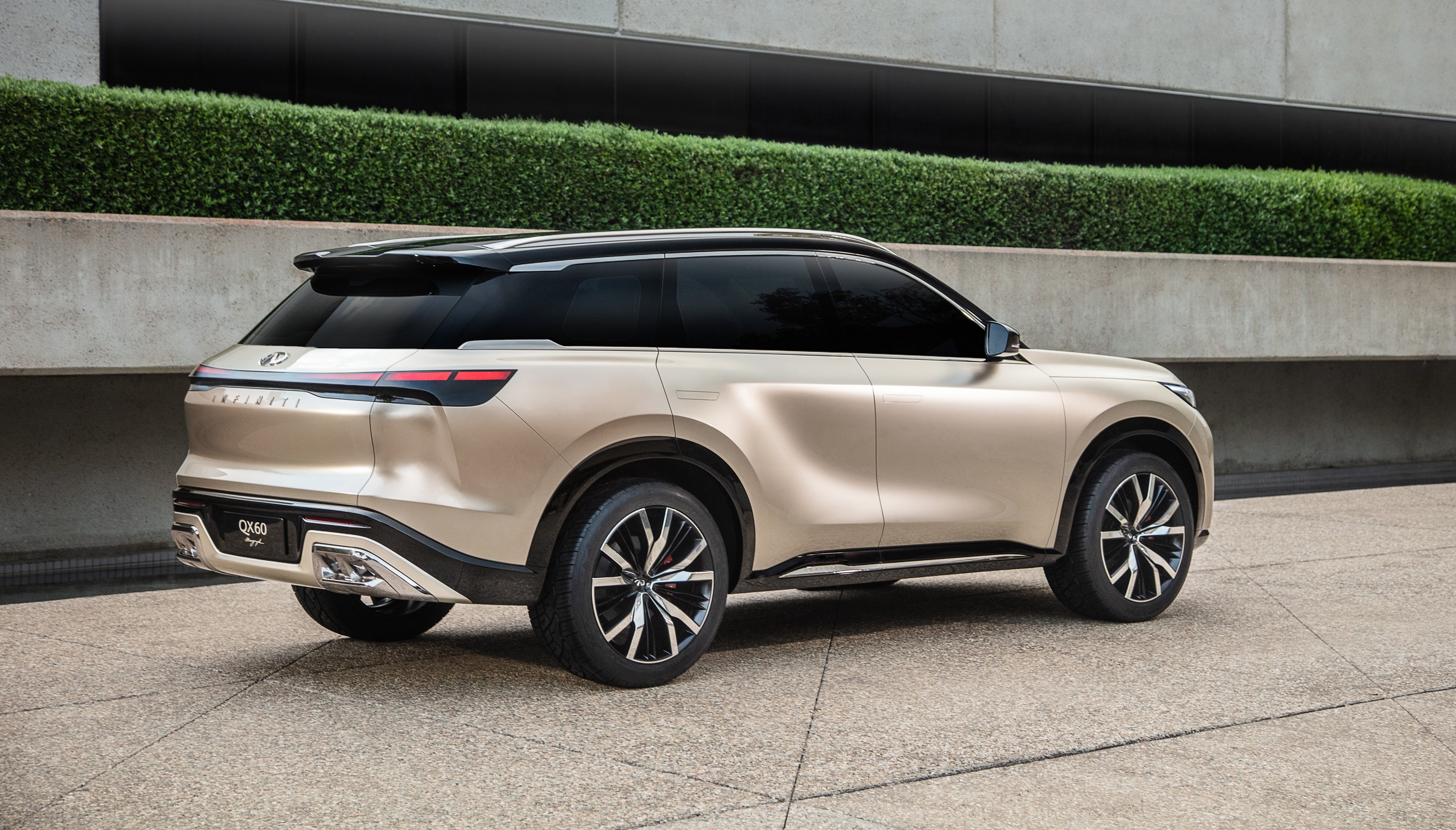