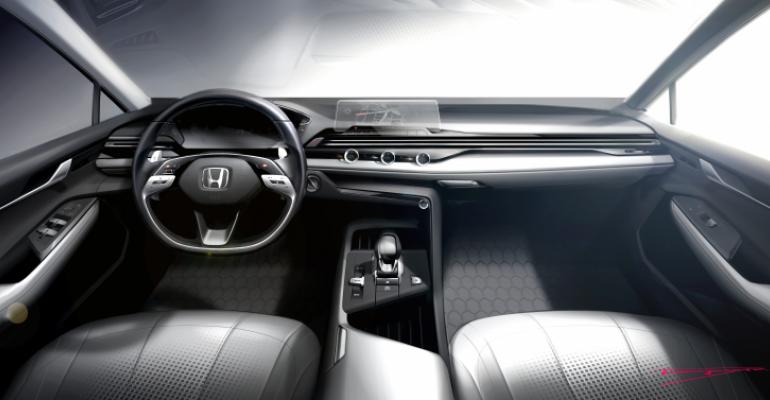 Honda says the idea is that interior space is maximized while the space required to house mechanical components is kept as minimal as possible. The automaker says it heard from designers at other brands who noted having taken inspiration from Honda’s early vehicles.

“We make it simple.” That’s Honda’s tagline for its new approach to interior design.

Perhaps “new” isn’t the best word to describe the movement, however, because the automaker’s early vehicles wore simplicity as a badge of honor. Recent times have brought more buttons, screens, displays and technology, so Honda’s decision to move back toward its roots with human-centered design is notable.

Honda says the idea here is that interior space is maximized while the space required to house mechanical components is kept as minimal as possible. The automaker says it heard from designers at other brands who noted having taken inspiration from Honda’s early vehicles, which were nothing if not human-centered.

What does this mean from a practical standpoint? Fewer buttons, first of all. In a rendering sent with Honda’s announcement, we can see a spartan interior with most physical buttons having been removed in favor of touchscreen controls. This isn’t an entirely new idea, but if the design rendering makes it into a production car, it will become one of the most minimalistic interiors in a Honda vehicle from the past two decades.

As it did with its vehicles in the 1970s, ’80s, and ’90s, Honda also is using simplicity as a way of improving outward visibility and interior space. The automaker says a large, glassy greenhouse provides a great view of the road and allows the driver to pilot the vehicle with fewer distractions.

We’ll have to wait and see where, and if, Honda’s new interior design philosophy surfaces in a production car. The brand is set to unveil its new 11th-generation Civic for the ’22 model year (pictured below), so the chances are good that it will deliver on these promises at that time.

Honda says the new cars will begin arriving at dealerships in summer 2021, and notes that more information will become available via a live event on April 28, so we won’t be waiting long for our answers.