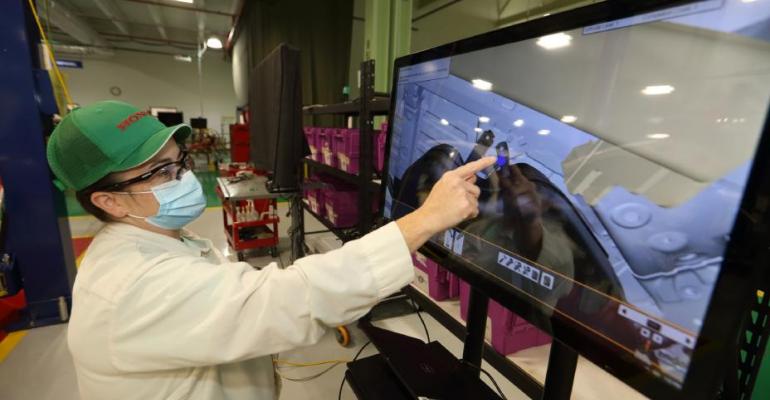 In an effort to ensure quality for every 2022 Acura MDX rolling off the assembly line in East Liberty, OH, Honda is using new tools to train associates as they prepare to build the brand’s redesigned flagship.

Bill Ramsey, engineering/manufacturing leader for global production of the MDX, says the goal of the training was to familiarize workers with the new technology required to build the SUV.

The new MDX is “the most premium, performance-focused and technologically advanced SUV” in Acura history, according to officials from Honda Motor America, which operates the East Liberty plant, which also builds the Honda CR-V and Acura RDX.

To prepare for MDX production, some 1,500 of the plant’s 2,900 associates went through some 8,000 training sessions using new virtual tools that were imported from Sweden, according to Joey Sippel, training director-Assembly Dept., New Model/Acura MDX.

“We wanted to enhance our training and engagement with our associates,” he says. “We know our younger associates like to engage with gaming,” so Honda employed virtual-reality technology from a Swedish company called Vizendo.

The sessions allowed associates to train for new tasks in a virtual environment through a touchscreen that allowed them to practice on virtual elements before handling physical parts to install, Sippel says.

By starting more than a year ago, the workers were able to provide the Acura design team with feedback on what works, what does not and how to improve it, which served to help enhance the overall quality of the finished product.

“One of our targets was to involve our associates earlier in the process,” Sippel says.

The VR technology also allowed for the social distancing of assembly-line workers amid the COVID-19 pandemic, Ramsey says. In addition, plant engineers will use the system to help improve efficiency along the assembly line.

Ramsey says Honda also deployed new automation at East Liberty, where the MDX and all new Acura models are built exclusively for distribution in North America.

The plant’s highly automated technology includes a 5,000-ton servo stamping press, which allows for sharper sculpting of the hood and body panels while forming steel and increased use of aluminum. The ultra-rigid body, created using a high-accuracy body weld process and new high-performance adhesives, is stiffer in every measure, improving the MDX’s ride and handling qualities and creating a quieter, more comfortable cabin.

New automation also is applied to other aspects of the new MDX, Ramsey says. “We added automated sealing to the door line,” whereas in the past workers had applied the sealant by hand.

Production associates at the company’s engine plant in Anna, OH, will build the 3.5L V-6 for the new MDX as well as the all-new 3.0L turbocharged V-6 that will power the Type S high-performance variant set to arrive in the summer.