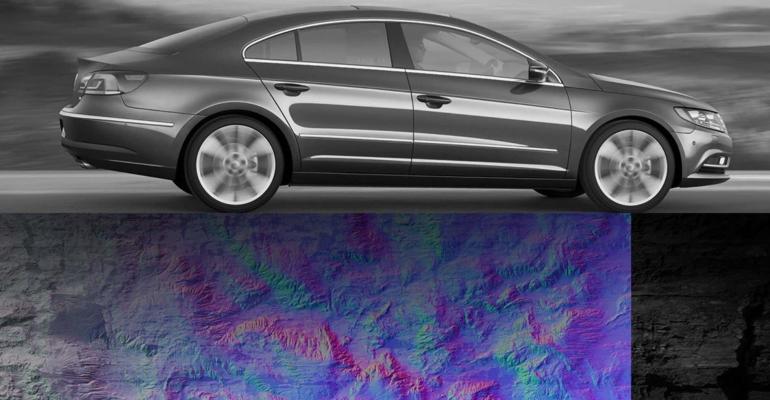 GPR says its technology creates a 3-D map of a road’s unique subsurface signatures, enabling new levels of safety and performance for ADAS and autonomous vehicles. Five years out from projected 2026 production, GPR says it has already mapped some 25,000 miles of roads.

Whether enjoying a vehicle’s adaptive cruise and lane centering (SAE Level 2) semi-autonomous driving or (maybe someday) full sit-in-the-back-and-work, read or nap (Level 5) autonomy, that vehicle always needs to know precisely where it is. And most today use combinations of cameras, radar, lidar and super-accurate GPS for that purpose.

But what happens when those systems are handicapped or rendered useless by pitch blackness, torrential rain, snow and/or grime-covered lenses? The vehicle’s positioning systems give up and tell you they can’t function under those conditions. As drivers, we can deal with that in conventional vehicles, but fully autonomous vehicles – not so much.

So, what if the vehicle carries a radar unit that can peer under the surface and “see” precisely where it is despite adverse conditions above? Therein lies the promise of ground positioning radar (GPR), a new technology being tested and touted by the company that bears that name as “the most accurate and reliable vehicle positioning system.”

Cameras and lidar lose effectiveness in poor visibility and when lane markers aren’t clear, and radar and GPS can be physically blocked. But GPR’s “next-generation Aegis” radar can precisely position a vehicle within a few centimeters regardless of weather, low-visibility conditions, poor road markings or other common challenges to ADAS systems.

In a phone interview, GPR CEO Tarik Bolat tells Wards the maps are created through a two-step process.

“The first part is map-creating vehicles with sophisticated sensors driving high-value routes such as major highways and high-traffic parking lots and garages,” he says.

“The second part is a crowd-sourcing element. Consumer vehicles equipped with GPR will need more passes over an area to create a production-quality map, but as customer usage accelerates, their vehicles will continuously expand the map. The more users we have, the better the product, which attracts more users, and so on.”

Mounted under the vehicle, the Aegis unit sends low-frequency pulses two-to-three meters into the ground to pick up reflections that create a detailed map that remains stable over time. These measurements of underground data are integrated with surface-based data to position the vehicle in real time.

Then that precise position is fed into the vehicle’s navigation system (pictured, below) to help it provide accurate and reliable driver-assist capabilities such as lane keeping and automated parking as well as future autonomous capabilities.

How is it possible for radar to penetrate the road surface and look beneath it? “It has to do with the very low frequencies that can be used today,” Bolat explains.

“Forward-sensing radar uses much higher frequencies, which can be blocked. The frequencies we use can go through a lot of surfaces and detect subtle changes to create a unique fingerprint that includes soil type and density, concrete and other infrastructure elements.”

He adds that GPR will provide one input that can be integrated with other inputs to help navigate the vehicle.

“The OEMs use several inputs to make ADAS decisions today; GPR is enabling that decision-making to be much more accurate and reliable with its product,” he says.

“We are also looking at this technology for other purposes such as pothole detection and determining whether a surface is dry, wet or icy for stability control. Once it is on the car, we can continuously make it better and release new features through over-the-air upgrades. It will be up to the OEMs to determine how to release and price new features to their customers.”

The company contends that 51% of traffic fatalities result from lane departures, which could be prevented with improved ADAS, and that 80% of drivers want vehicle safety systems – including emergency braking and lane keeping – to work better.

Five years out from projected 2026 production, GPR says it has already mapped some 25,000 miles (40,250 km) of roads; its prototype systems are being tested by “several” top-five OEMs; and it is also working with Tier One suppliers and AV companies.

Beyond automotive, GPR potentially can be used in other industries including warehousing, construction, utilities, mining, agriculture and rail.

“Among the OEMs we are working with,” Bolat says, “we are seeing a lot of interest in leveraging this data for non-positioning purposes as well. As we get deeper with automakers, they are saying, ‘We need to solve this or that problem, and GPR might be able to do that.’ It will be a unique sea of unpacked data upon which a lot of different applications can bloom.”