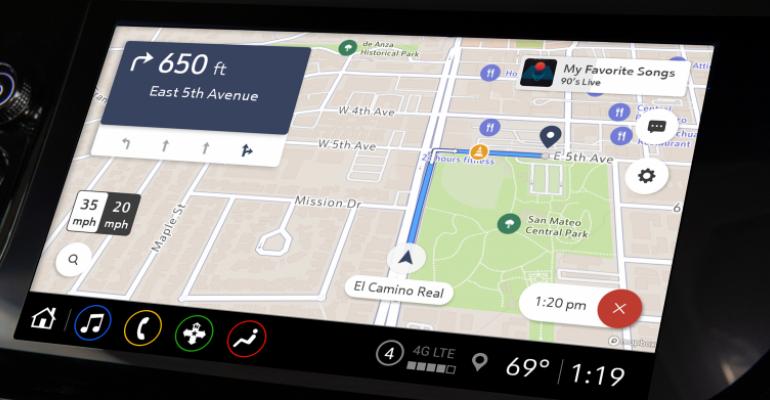 More than 230,000 GM customers have installed the Maps+ software.
Vehicles

Rolling out an onboard, live navigation system retroactively to vehicles as much as four years old is a pretty good hint of what will be possible as the software-defined vehicle takes hold.

For a glimpse of the future and how the software-defined vehicle will change pretty much everything, take a look back to April.

That’s when General Motors rolled out Maps+ to existing owners of some 900,000 ʼ18-model or newer GM vehicles that previously did not have built-in navigation systems.

The Maps+ service combines Alexa-based voice assistance and a number of other vehicle apps – such as music streaming and points-of-interest services for shopping, parking and restaurants, as well as live traffic reports and speed-limit alerts – into a single interface. It also can suggest convenient service-station stops when it detects the vehicle is low on fuel. Future capabilities are expected to be added, such as location of charging stations for owners of electric vehicles.

The launch not only provided an element of delight and convenience for existing GM vehicle owners, it opened up a new and potentially ongoing revenue stream for the automaker with vehicles up to four years old. Maps+ is part of the GM App Access subscription plan, which goes for $14.99 per month. More than 230,000 users have installed the software, meaning there’s already potential for tens of millions of dollars in new annual revenue for the automaker.

Early on in exploring possibilities for collaboration with Mapbox, GM “recognized there was an opportunity to further enhance the customer experience – these are some customers who didn’t buy their vehicles with (embedded) voice recognition and/or mapping,” Matt Joshua, vice president-Infotainment Strategy at GM, points out.

Impressive was the short development time required to roll out the feature. Mapbox and GM took the program from concept to release in just nine months, a nearly unheard-of timespan in an industry that has tended to work with three- and four-year development cycles.

Mapbox dates back to 2010, with its beginnings as a consultancy offering customized mapping data for government agencies and corporations. During that time, the company saw a need for more advanced software development tools to support its work, so it created those and later made them available to other software developers.

“This is what we are still building around today,” says Alex Barth, vice president of Automotive at Mapbox. “Fast forward, we’re not only an analytics and visualization tool (provider) anymore; we have a broad-spectrum platform.”

“Our customers do very unique, differentiated things on top of (our software),” he says. “They have in common that they are using Mapbox, but the UX (user experience) they are creating, the functionality and the optimizations they are creating on top of Mapbox are unique to their business.”

For GM, that resulted in a platform with common features that incorporates branding elements unique to its Chevrolet, Buick, GMC and Cadillac vehicles.

The Mapbox platform “gives us the ability to have a fully integrated, built-in experience for (our) customers,” Joshua says. “It doesn’t feel like it is something that’s been bolted on. It’s actually part of that branded experience that we want to provide to all of our GM customers.”

There were two keys to making this program work and work quickly, which point to the future as the industry shifts toward the software-defined vehicle.

First is the Mapbox hybrid (embedded- and cloud-based) software platform itself, which can be deployed via a variety of operating systems, from iOS to Android and Linux.

“We were so quick because we had those highly reusable, pretested components that we could build on and build the customization on top of rather than having to build from the ground up,” Barth says.

Second were the GM vehicles themselves which, despite a design cycle that began as much as eight years ago, were futureproofed to some extent with excess compute capacity onboard that allowed them to accommodate the new software and functionality.

“That’s something new in automotive, and this is happening now,” Barth says. “GM is one of the leaders. The fact that GM had a huge footprint and growing footprint of addressable vehicles in the market that are actually ready to receive an upgrade because there is space on them is remarkable.”

“I think we should expect…in this new age of the software-defined vehicle that that is going to be par for the course,” Barth says. “It’s enabling a new way in how we’re thinking about vehicles. And I think this is the undercurrent…(that will) effect the seismic shift in what we should be expecting as consumers.”

Adds Joshua: “From my perspective, it’s a view into the future to how powerful software can be leveraged in terms of creating this experience for our customers.”

GM is promising huge growth in revenue generated by the digital economy, targeting $20 billion-$25 billion annually in software-enabled services by 2030.

The new thought here is “that we have to continue to make the vehicle better throughout the ownership cycle for the customer,” Joshua says. “It’s not like it used to be, where your vehicle was at its best when it came off the dealer’s lot. Now, the expectation of the customer and our commitment to our customers as well is (that) we want to continue to build that experience and adapt that experience, leveraging our software as we go forward.”

That should be good news for Mapbox, which is likely to continue working with GM on additional features.

“I would expect to continue to see collaboration between companies like GM and Mapbox, because there are areas we want to differentiate but there are also areas that we want to be able to leverage our scale as well as the scale of other industries,” Joshua says.

“The most exciting things (to come) are the things we haven’t even thought of yet.”