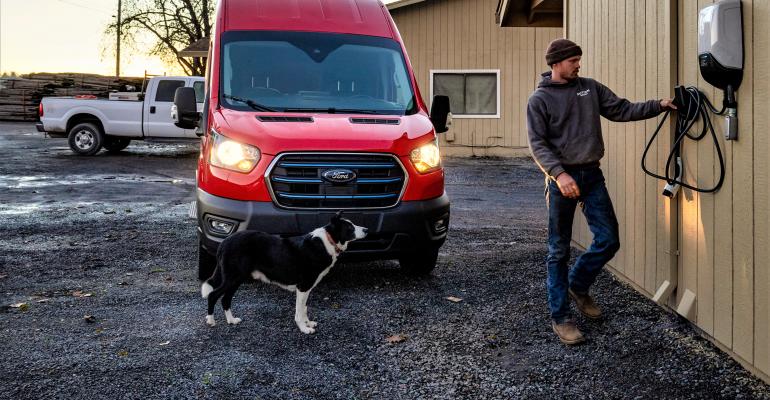 The electric Transit was designed to make the transition to battery-powered vans as painless as possible for Ford’s longstanding fleet customers. It’s also a much more pleasant vehicle to drive.

The ’22 Ford e-Transit will likely get far less public attention than the ’22 Ford F-150 Lightning electric pickup truck – with its optional ability to power your home if electric service goes out. But the e-Transit may be just as important a vehicle as Ford accelerates its efforts to launch class-leading BEVs throughout the 2020s.

Adding a fully electric drivetrain to its well-known, high-volume Transit fullsize van line was meant from the start to make the transition to battery power as easy as possible for loyal fleet buyers. In particular, fleets and businesses won’t have to change any of the special equipment, or “upfits,” that have been customized for their particular needs – often at considerable expense.

During a January e-Transit presentation and test drive, Ford often stressed that the interior of the Transit van remains unchanged. All the fittings, mounting points, tie-downs and the rest are exactly the same as any other Transit. In that respect, it echoes the F-150 Lightning, which carries over the entire cab structure and interior of the pickup bed from the gasoline F-150, again allowing commercial users (even retail buyers) to continue using bolt-ins from toolboxes to camper shells, regardless of powertrain.

Ford executives acknowledge the current generation of Transit van wasn’t originally developed with battery-electric power in mind. The need for a plug-in Transit emerged from the work of Team Edison, an internal group founded in 2017 that not only conceived the F-150 Lightning but also redesigned what started as a pure compliance-car EV into the well-received Mustang Mach-E crossover.

So, while the body of the electric Transit largely uses the same stampings as gasoline and diesel versions, it rides on a different chassis that accommodate a liquid-cooled Mustang Mach-E battery pack with 68 kWh of usable capacity between the rails. A transverse 266-hp electric motor sits between the rear wheels, rated at a maximum torque of 317 lb.-ft. (430 Nm). With a gross vehicle weight of 9,500 lbs. (4,309 kg), the e-Transit is defined by the NHTSA as a Class 2b vehicle. 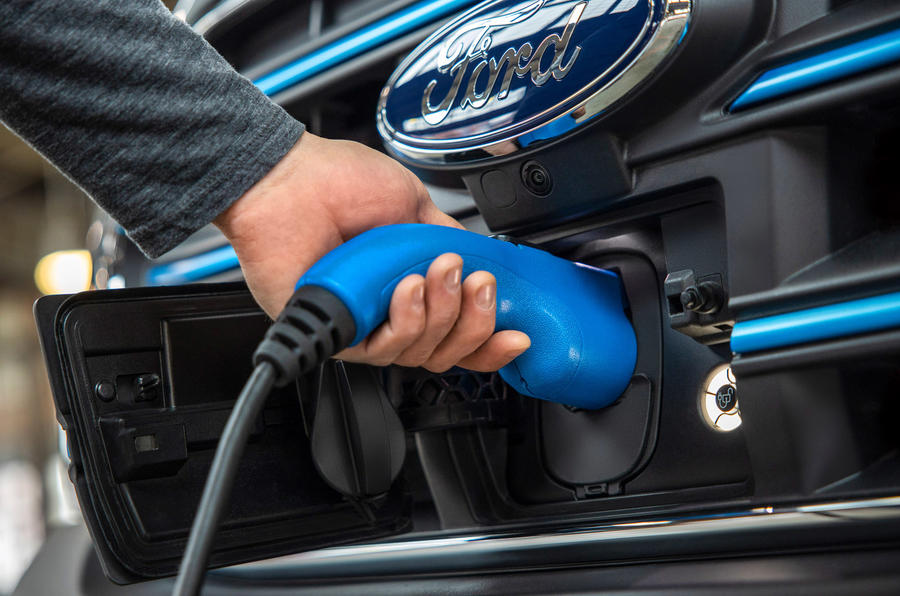 Ford projects the range of the e-Transit, in its low-roof cargo van configuration, to be 126 miles (203 km) – a number it says exceeds the average daily mileage of most Transits in fleet use today. The pack can be fully recharged, from 0% to 100%, in about 8 hours using a Level 2 charging station capable of 11.3 kW. The e-Transit also provides for DC fast charging; Ford cites a fast-charging time of 34 minutes from 15% to 80% percent of capacity, at CCS fast-charging stations capable of 115 kW or more. (Like all fast-charging statistics, this one likely comes under optimal conditions of climate, battery temperature and more.)

Smoother, Quieter on the Road

Significantly, the electric van is the first-ever Transit with independent rear suspension. On the road, it’s immediately clear the e-Transit rides far better than any engine-equipped version. The difference is especially pronounced when traveling without any cargo or load. In those circumstances, a conventional Transit’s live rear axle gives a bouncy ride in which the entire body rocks when the rear wheels cross an angled ridge or railroad track, say.

Not that the e-Transit is particularly a speed demon. It may use an electric powertrain related to that of the Mach-E, but the tuning is considerably different – befitting a vehicle with cargo capacities up to 4,290 lbs. (1,946 kg). The regenerative braking isn’t that strong, compared to other electric vehicles, and we experienced a slight lag before it kicked in.

The electric Transit differs from its combustion-engined siblings in another way, too: It’s actually quieter at speed than in stop-and-go traffic, when the whine of the Pedestrian Alert noise is particularly apparent to occupants. Above 20 mph (32 km/h) or so, it’s remarkably quiet, with only wind noise and a bit of humming from the motor and electronics.

Drivers of electric commercial vehicles largely report they’re less tiring to drive than diesel or gasoline versions. Fleets with a handful of electric trucks often see competition among drivers to get them because they’re calmer and more pleasant to spend time in. After covering 30 miles (48 km) or so in the e-Transit, mostly along the two-lane roads that make up the wine country of California’s Sonoma County, we could certainly believe it.

The e-Transit drive was part of an elaborate media introduction to the Ford Pro suite of software and services. The newly named offering continuously collects data transmitted by the vehicle on the driver’s behind-the-wheel behavior, the vehicle location and operating conditions, and a lot more – including battery energy and charging management – to the cloud (pictured, below).

The data is then made available to fleet managers, who can access it through simple analysis tools that let them use Ford Pro Intelligence to schedule and manage EV charging at the depot, at drivers’ houses if they take home a work vehicle, and at public charging sites. Ford says it expects Ford Pro services to account for billions of dollars of revenue by mid-decade. 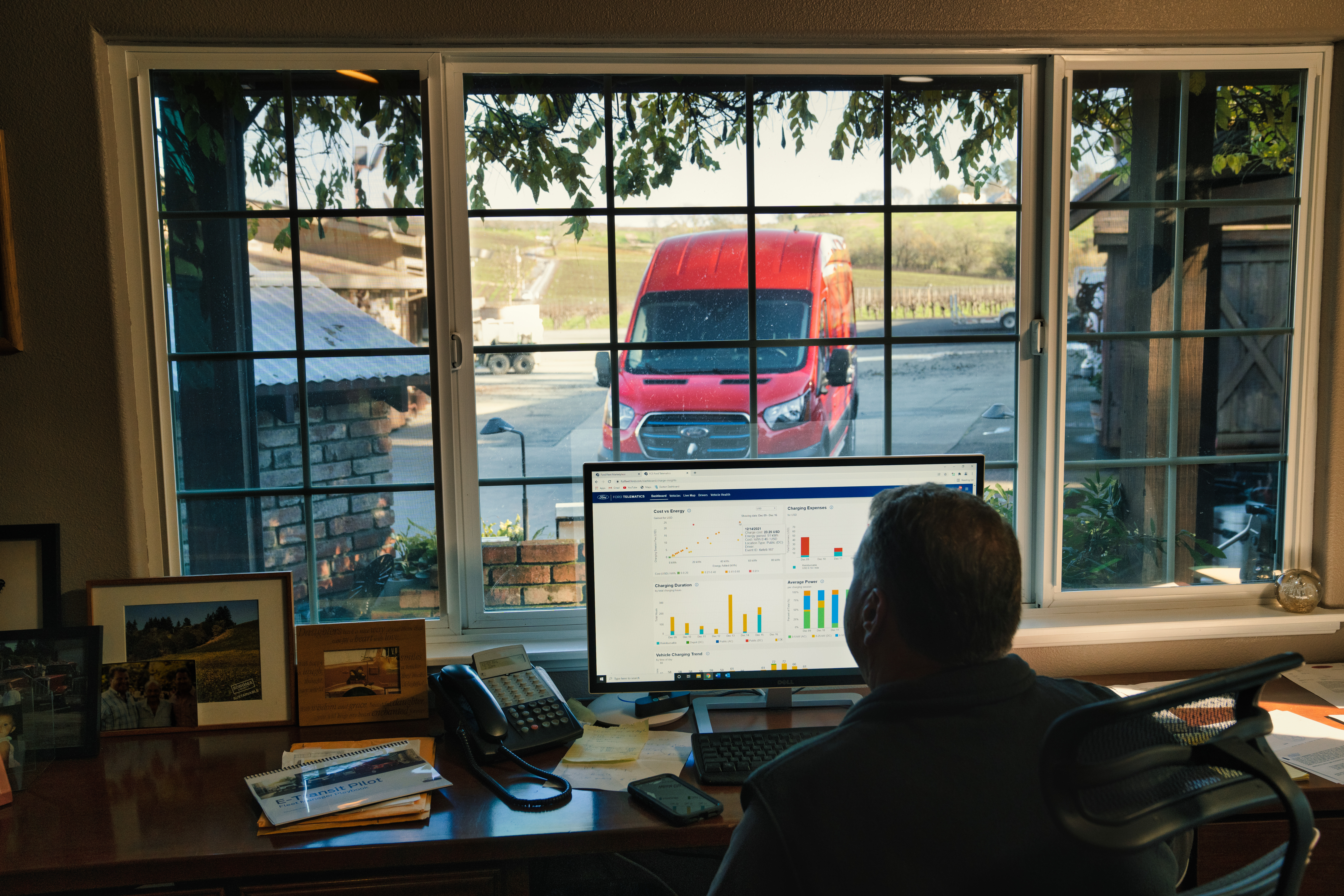 The e-Transit comes in eight configurations, with variations in the body (chassis-cab or cargo van), roof height (low, medium or high), and wheelbase (regular, long and long with extended body). How popular is the Transit van? The 1-millionth example rolled off the lines at the Kansas City assembly plant last June, seven years after U.S. production started in 2014.

Deliveries of the ’22 Ford e-Transit started in early February. The base price starts at $48,880 (including $1,695 destination fee). Ford tells us the electric powertrain adds roughly $9,000 or $10,000 to the price of a similarly equipped conventional Transit, a difference that can be covered by the $7,500 federal tax credit for qualifying purchasers and a variable array of state and local incentives as well.

Fleets that electrify also will benefit from the lower per-mile costs of electricity against liquid fuels, not to mention considerably reduced maintenance requirements – a sore subject for fleet managers coping with the elaborate emissions after-treatment systems found on the past 10 years of diesel engines. 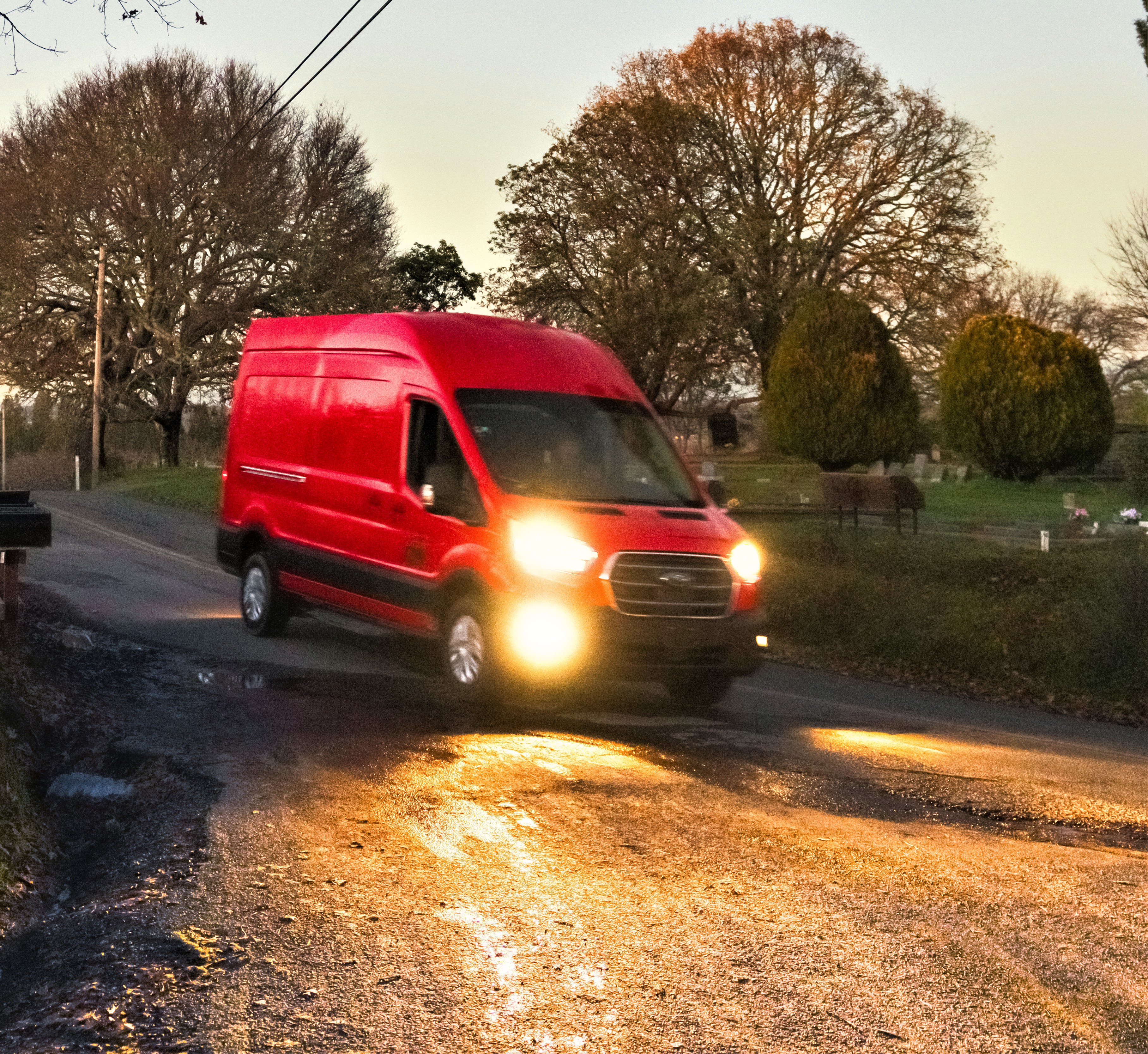