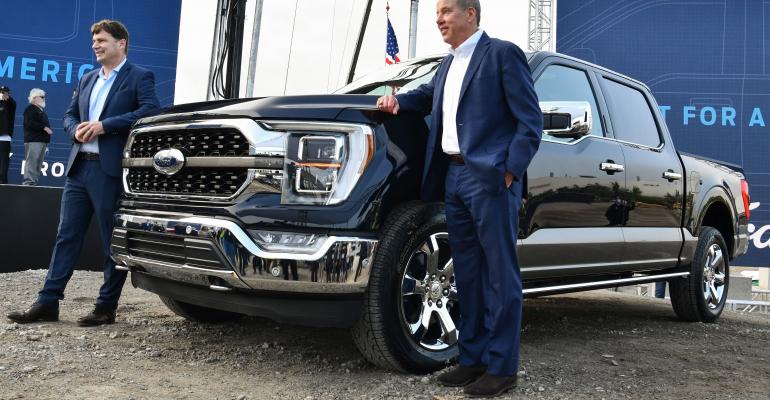 Ford Invests in BEV ‘Truck of the Future’

The $700 million investment at Ford’s Rouge assembly complex in Dearborn will create 300 jobs and result in a battery-electric F-150 pickup, rolling off the line in mid-2022, as well as an F-150 Power Boost hybrid.

Ford plans to spend $700 million for a new plant within the company’s fabled Rouge complex in Dearborn, MI for building new battery-electric versions of the F-150.

“We are proud to once again build and innovate for the future here at the Rouge with the debut of our all-new F-150 and the construction of a modern new manufacturing center to build the first-ever all-electric F-150,” says Bill Ford, Ford’s executive chairman, adding the Rouge complex has a long and illustrious history.

He recalls how other Ford executives urged him to close the complex in the 1990s, and he instead pushed to rebuild and renovate.

The COVID-19 crisis underscores why it is important for companies like Ford to help keep the U.S. manufacturing base strong and to help the U.S. get back to work – a point seconded by the United Auto Workers – the Ford executive chairman says at a socially distanced event at the Rouge Complex that was live streamed via YouTube.

“When America needs help, Ford responds,” he says, noting the Rouge has been part of the American industrial fabric since it first opened in 1917. Ford’s willingness to build vehicles in the U.S. supports 1 million jobs domestically, according to a study by the Boston Consulting Group.

Gerald Kariem, the UAW vice president in charge of the Ford Department, says, “We are proud today to announce for our Ford UAW members and our nation that Ford is building this new plant to assemble the truck of the future – a battery-electric Ford F-150.

“Where once the Mustang changed America, UAW members will now build the truck that will change America – Built Ford Tough by UAW members,” says Kariem.

Jim Farley, Ford COO who will become CEO Oct. 1, emphasizes the new electric F-150, which will look much like the 2021 F-150, will be a genuine work truck built to haul, tow and travel off road.

The dual electric motors that will power the F-150 also will provide excellent acceleration, the automaker says. The electric F-150 will have a “frunk” where the engine compartment is on a conventional truck, where “several hundred” pounds of cargo and/or tools can be securely stored, Farley says.

The BEV F-150 also will be able to travel “hands free” on the highway and come with the latest connectivity technology, Ford officials note.

Farley says the new truck will be carbon neutral because the new assembly plant will operate only with renewable energy.

Including investments for Bronco and Ranger at the Michigan Assembly Plant in Wayne, MI, announced last year, Ford plans to invest more than $1.45 billion and create approximately 3,000 jobs over the next three years in Michigan alone, the automaker says.