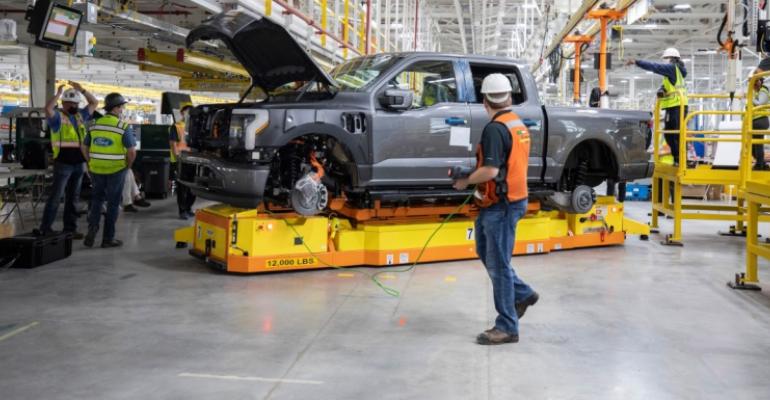 Ford to Double Output as Lightning Strikes With Electric Pickup

The automaker is investing in tooling that will double planned output of the new battery-powered truck in its first full year. Ford says it has 150,000 orders for the Lightning, with that number rising daily.

DEARBORN, MI – Ford plans to double the initial production of the battery-electric Ford Lightning pickup truck, as it adds 450 jobs and spends an additional $250 million at the Rouge manufacturing complex here and at two other plants near Detroit making major components for the vehicle.

Ford executives, which had previously committed $700 million to the BEV project, say the expansion of Lightning production follows strong public response toward the truck since its unveiling in May.

The automaker says it has 150,000 orders for the Lightning, with that number rising daily. Some 70% of those are coming from customers new to Ford, the officials add.

“We knew the F-150 Lightning was special, but the interest from the public has surpassed our highest expectations and changed the conversation around electric vehicles. So we are doubling down, adding jobs and investment to increase production,” says Executive Chair Bill Ford.

“This truck and the Ford-UAW workers who are assembling it in Michigan have a chance to make history and lead the electric-vehicle movement in America,” he adds.

The F-150 Lightning, with a starting price of $40,000 and targeted with an EPA-estimated driving range of 300 miles (483 km) with the extended-range battery, is aimed at the heart of the U.S. auto market.

“Electrifying the F-Series – America’s best-selling truck for 44 years – and assembling it at this high-tech facility in Michigan – represents a significant step toward mass adoption of electric vehicles in America,” says Kumar Galhotra, Ford’s president of The Americas and International Markets Group.

“It’s packed with ingenious features and technology that will improve over time. It’s exhilarating to drive and it can power your home and worksite,” he says, noting Ford initially planned to build 40,000 of the battery-electric trucks in the first year, but with the additional capacity for batteries and other components will now produce 80,000 in the first full year of output.

The Lightning also is being assembled in Ford’s newest and most modern plant in a new building sitting on the footprint of an old, now-demolished factory that years ago was the home of the Ford Mustang. The new plant is filled with light, comes with the latest and largest robots, and has computers that tell a worker if a component is fitted and fastened properly to the truck. 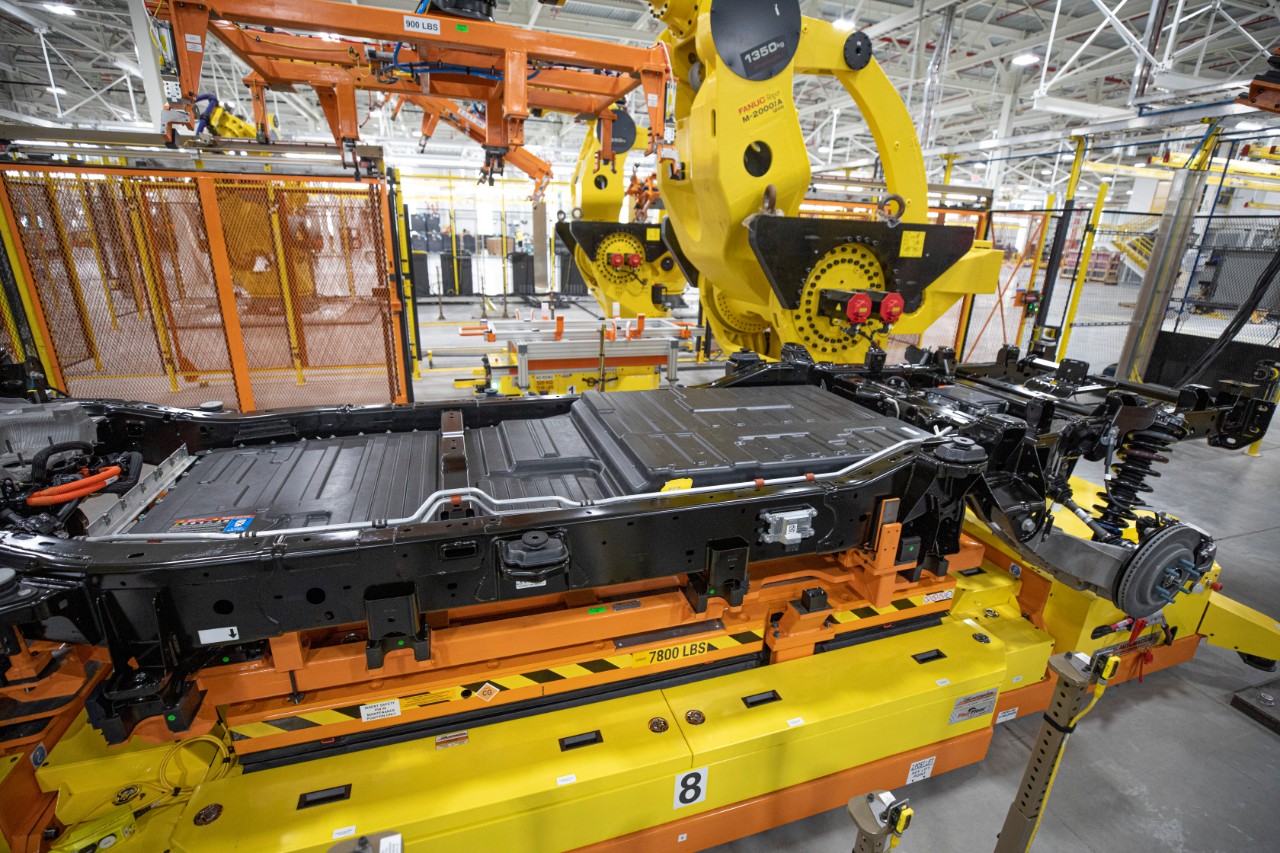 “It doesn’t leave the station unless it’s perfect,” says Corey Williams, manager of the Dearborn electric vehicle center and the Dearborn Truck plant, adding the system also allows for two-way communication between the operator and the rest of the plant.

He notes the systems used in assembling the F-150 Lightning represent the future of manufacturing at Ford. “This is the next step,” he says.

The systems are programed for safety and will shut down automatically if someone ventures too close.

The BEV plant leans heavily on the Dearborn Truck Plant next door. The cabs and front end for the Lightning are made in the truck plant’s body shop and elements such as the seats and headliner and inner doors also are drawn from bill of materials used in the conventional F-150 powered by an internal-combustion engine.

Being able to borrow elements from the F-150 and have the Lightning painted inside the existing truck plant’s paint system made it possible for Ford to hold down the overall price of the battery-powered truck, says Shaun Whitehead, Ford’s director-manufacturing for vehicle operations.

“It’s one of the big advantages we have,” he adds. “We can bring all that scale we have.”

There are some exclusive features, however. The Lighting has a frunk, for example, which occupies what would be the engine compartment on a conventional truck. It also has an exclusive front grille and lighting layout and comes with an onboard scale to measure the weight of the payload and relay that information to the touchscreen in the center stack. The scale in each truck is set at a special station in the final-assembly area.

Linda Zhang, chief engineer for the F-150 Lightning, emphasizes the other elements that make it different from the conventional F-150. The frame underneath the cabin is unique, and the design allows the battery packs assembled nearby in Rawsonville to be inserted into the truck by heavy-duty robot.

The Lightning also comes with two electric motors made in Sterling Heights, standard 4-wheel drive and an independent rear suspension that helps make a drive in the truck smoother, she notes.