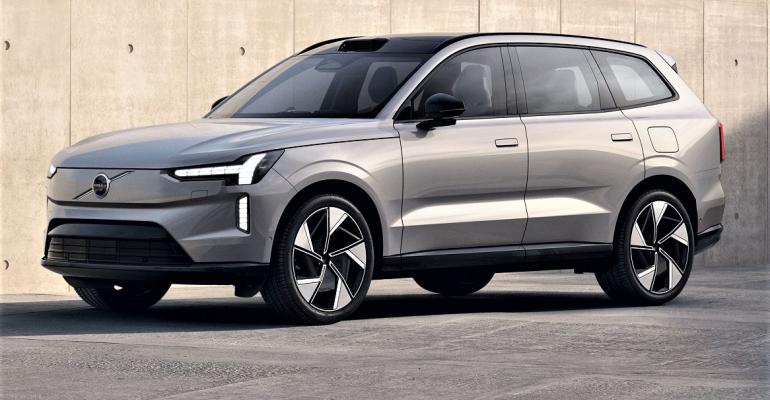 Touted by Volvo Cars CEO Jim Rowan as a 7-seat family recreational vehicle able to travel more than 370 miles on a single charge, he says the EX90 signals the future direction for the company which intends to be a net zero carbon emitter by 2040.

The long wait for Volvo’s launch of its first all-electric fullsize SUV comes to an end with the global unveiling of the EX90.

Trumpeted by Volvo Cars CEO Jim Rowan as a full 7-seat family recreational vehicle able to travel more than 370 miles (596 km) on a single charge, he says it represents both a new vehicle and the future direction for the company which will be an exclusively electric manufacturer by 2030 and a net zero carbon emitter by 2040.

In practice, this means the automaker will launch one new fully electric car every year until the end of the decade.

Naturally, more than just its Scandinavian influence, the car’s styling is dominated by aerodynamically smooth lines to aid efficiency and extend driving range. Also, with its electric technology developed in-house-, the Volvo EX90 claims to charge from 10% to 80% battery capacity in under 30 minutes. 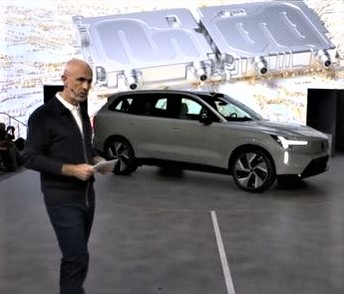 Initially, the SUV will be available in a twin-motor all-wheel-drive version powered by a 111-kWh battery and two permanent-magnet electric motors delivering 300 kW (408 hp) of power. A later performance version will claim a 380 kW (517 hp) output and 671 lb.-ft. (910 Nm) of torque. However, Volvo points out that charging and range figures are preliminary, and these outcomes are not guaranteed.

In line with the automaker’s history, safety is a main focus, with Rowan (pictured, above eft) claiming the EX90 will be the safest vehicle Volvo Cars has ever brought to market. Much of this, he says, derives from its AI-driven machine learning software claimed to “get smarter and safer over time, as it learns from new data and receives (over-the-air) updates.”

The EX90 uses a full suite of awareness sensors including cameras, radars and lidar connected to high-performance central computers, where the Nvidia Drive platform runs Volvo’s in-house software claiming a real-time, 360-degree view of the world.

Volvo says the systems can see small objects hundreds of meters ahead in any weather or lighting conditions, creating more time to inform, act and avoid. The sensors also help improve the reliability and overall performance of the Pilot Assist driver assistance function, with a new steering support function while changing lanes.

The automaker also claims its sensor array makes it the first Volvo hardware-ready for unsupervised driving in the future.

The EX90’s interior also boasts a range of sensors and cameras to gauge driver awareness using in-house-developed algorithms to gauge eye-gaze concentration. The technology claims to understand when a driver is distracted, drowsy or otherwise inattentive, beyond what has been possible in any of its products to date.

In the event of concern, the system will softly nudge the driver and become more insistent if the driver is not responsive. Should the system decide the driver has fallen asleep or become incapacitated through illness, the car will draw to a stop and call for help.

For passengers, the car’s computing power from Snapdragon’s Cockpit Platforms with the visualization capabilities of Unreal Engine, the 3D tool developed by Epic Games, allows fast gaming with high-quality graphics on the in-car screens including the 14.5-in. (37-cm) center display and heads-up display. 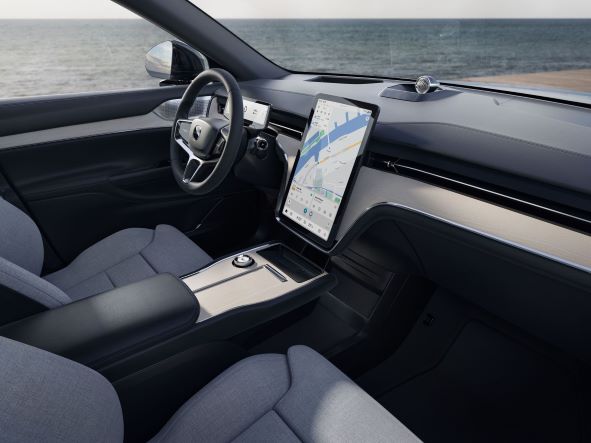 The EX90 also will come with phone key technology as standard for those who can’t do anything without their smartphone. It will automatically unlock the car and start a personal welcoming sequence as the driver approaches. Your personal profile will be loaded automatically as you enter the car.

In terms of sustainability, the EX90 contains about 15% of recycled steel, 25% of recycled aluminum as well as 106 lbs. (48 kg) of recycled plastics and bio-based materials, which corresponds to about 15% of the total plastic used in the car, the highest level of any Volvo car to date.

Volvo has followed Nissan’s, and later Ford’s lead by including bi-directional charging with this model. It allows the car’s battery to be used as an extra energy supply, for example to power a home, other electric devices or another electric Volvo car.

Rowan says: “The Volvo EX90 is a statement for where we are, and where we are going. It’s…the first Volvo car to be truly defined by its software and part of a wider ecosystem, connecting to your home and your other devices.

“The Volvo EX90 is our vision of a large family SUV in the electric age. Born electric and software-defined, it demonstrates what future Volvo cars will stand for in terms of safety, technology, sustainability, design and creating a more personal experience for every customer.”