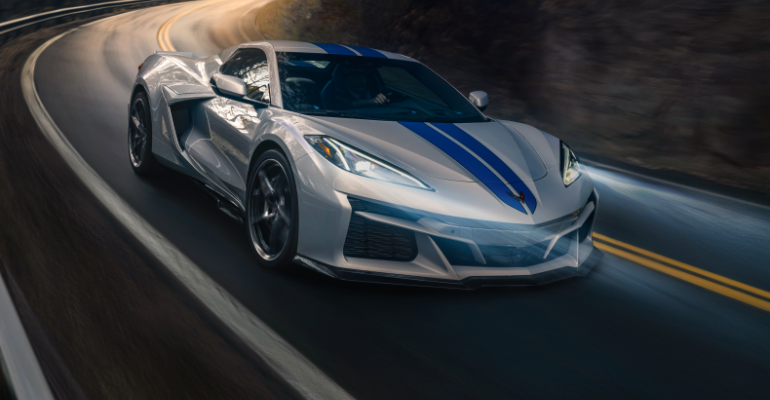 Chevrolet’s ’24 Corvette E-Ray is a gasoline-electric hybrid and marks the first time the iconic sports car gets an electrified powertrain.

For enthusiasts of cult cars, change can be painful.  Consider the outcry from Porsche purists when the Cayenne SUV debuted. Then there was the introduction of the Ford Mustang Mach-E battery-electric pony crossover, and garments were rended all over the world.

But let’s keep in mind that the Cayenne saved Porsche’s schinkenspeck in the 1990s, and the Mach-E sold more than 30,000 units last year – not bad considering the internal-combustion Mustang sold about 47,000. The times they are a changin’ and just about every car and truck we will consider buying in the next 15 years will have some level of electrification.

Enter into the shocking fray the’24 Chevrolet Corvette E-Ray, a gasoline-electric hybrid version of Chevy’s rolling work of art. Let the track jackets be torn in protest.

Perhaps a hybrid E-Ray will attract new buyers to the brand – former Prius owners who want to be seen as bad boys? Or bad girls? But there is no reason for Corvette to lose customers or enthusiasts as the ICE Vette is sticking around for now, including the Stingray version.

Nothing is lost for the purists. But they may as well brace for change because the likelihood is that the current Corvette will be the last pure gasoline-only Vette GM will make in Bowling Green, KY.

The E-Ray will travel on battery power up to 45 mph (72 km/h), so there will be lots of silent driving around the neighborhood and in traffic if the drivers are considerate of their neighbors. It is not a plug-in hybrid, so the battery is not designed to, for example, go 20-30 miles (32-48 km) on battery power alone. The gas engine under the midsection of the car (highly controversial when it debuted in 2020) is a 6.2L LT2 small-block V-8, but configured to have four of those cylinders deactivate in highway cruising for better fuel economy. With all that, maybe green will finally be the most popular color for the E-Ray.

E-Ray is the only hybrid sports car that provides naturally aspirated V-8 power and all-wheel drive, which is accomplished from an electric motor on the front axle. And to doubters among the Vette faithful, consider that the E-Ray is not only the greenest entry in its 70-year history, but also the fastest, clocking in at a 2.5-second 0-60 mph (97 km/h) sprint, and a 10.5-second quarter mile.

“Corvettes must provide an exhilarating driving experience on back roads, as well as tracks and E-Ray nails it,” says Tadge Juechter, executive chief engineer for Corvette. “The electrification technology enhances the feeling of control in all conditions, adding an unexpected degree of composure.”

The eAWD system is described as “intelligent” as it constantly “learns” the road surface via sensors, adapting along the way and engaging the front wheels only as needed to maintain traction under changing road conditions.

“This is a four-season, commutable Corvette” but one that is no slouch on the track, says Scott Bell, vice president of Chevrolet..

The amount of electric assist is tailored within each of the E-Ray’s six driver-selectable modes: Tour, Sport, Track, Weather, My-Mode and Z-Mode. Drivers can also select Charge+, which maximizes battery state of charge, a smart feature for city driving.

Some of the highlights and features of the E-Ray include:

E-Ray’s styling is not at all divorced from the Z06. The wheels have a twisted 5-spoke star design that is exclusive to E-Ray. There is an E-Ray exclusive body-length stripe package in electric blue to go with 14 exterior color choices.

The interior features an all-new Artemis Dipped Interior, with complementary green color tones on nearly every interior surface and is only available on’24 Corvettes.

The final EPA fuel economy rating is not yet settled. But the price is $104, 295 (plus destination) for the 1LZ coupe when it arrives in dealerships later this year.