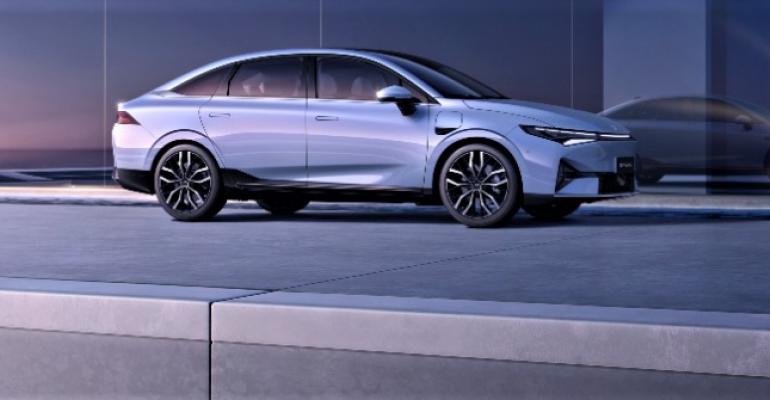 XPeng Motors reveals its new P5 ahead of the electric-powered sedan’s public debut at the upcoming 2021 Shanghai auto show.

Set to challenge the Tesla Model 3, NIO ET7 and BMW i4 in what is shaping up as a particularly hard-fought EV market segment in China and elsewhere, the 4-door is XPeng Motors’ third production BEV, following the G3 SUV launched in 2018 and P7 fastback-style sedan introduced in 2020.

Among the P5’s key innovations is an in-house-developed XPilot 3.5 autonomous driving system that is being pitched as the most advanced in its class. It uses 32 sensors, including two dual-prism lidar units, 12 ultrasonic sensors, 5 millimeter-wave radars, 13 cameras and a positioning unit to provide what XPeng Motors describes as a Navigation Guided Pilot function for hands-off driving in suitable conditions.

Xpeng Motors, which is listed on the New York Stock Exchange, says the lidar units, supplied by Livox Technology, are capable of distinguishing pedestrians, cyclists and static obstacles “including road works in challenging scenarios such as low light conditions, backlighting, night time and alternating light and dark illumination in tunnels.”

“The P5 is our most advanced and technically ambitious model yet. Our homegrown technology, distinctive design language and user experience philosophy all reflect XPeng’s drive to grow from its Chinese roots,” says He Xiaopeng, CEO of XPeng Motors.

In a bid to provide it with stylistic resemblance to the larger P7, the P5 receives distinctive front-end styling with angular headlamps connected by a single light band – a design element that is mirrored with the treatment of the taillamps.

The remainder of the exterior, with its largely unadorned flanks, is less flamboyant. However, Xpeng Motors claims its new model is its most aerodynamically efficient yet with a drag coefficient of 0.227.

Details of the P5’s electric driveline have not yet been made official. However, XPeng Motors officials suggest the new sedan will offer both rear- and all-wheel-drive layouts and a range of over 373 miles (600 km) on the Chinese NEDC test cycle.