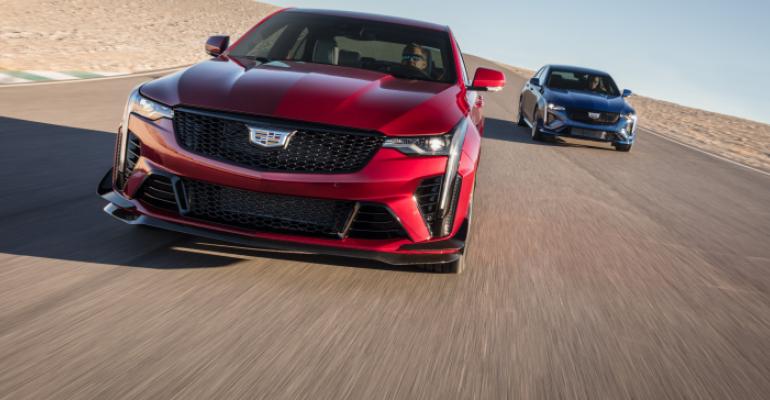 The new Blackwing models get loads of carbon fiber inside and out, low-profile tires, 6-speed manual transmissions, aggressively bolstered seats and the world’s fastest-responding suspension but, oddly enough, no Blackwing 4.2L V-8.

The reasonably new CT4 and CT5 are handsome, agile sport sedans, but they were widely outsold last year by the BMW 3- and 5-Series and Mercedes-Benz C- and E-Class. This same sales narrative has gone unchanged for nearly two decades as Cadillac has struggled to catch up with Munich and Stuttgart.

But Cadillac brand managers have reasons to be optimistic: While 2020 sales in Wards’ Lower Luxury car segment were down overall more than 27% from 2019 to 2020, the arrival of CT4 and CT5 as new entries (replacing ATS and CTS sedans) creates the illusion that Cadillac is growing its U.S. market share.

And the CT5, with 14,711 deliveries last year, outsold the Audi A6, Alfa Romeo Giulia, Lexus IS, Mercedes CLA and Volvo S60 series.

Building on this momentum, Cadillac is punching up the performance of its latest sport sedans with the ’22 CT4-V Blackwing and CT5-V Blackwing, the latest iteration of its “V-series” cars intended to capitalize on high-priced, high-output variants in the same way BMW does with its “M” models and Mercedes does with its AMG sub-brand.

The Blackwings will be available this summer, with the CT4-V starting at $59,990 and the CT5-V beginning at $84,990, both including $995 destination fees. A fully loaded CT5-V Blackwing will set you back $125,980. A 10-speed automatic, expected to account for most of the sales volume, is optional.

To clarify, the Blackwings won’t be the only upmarket sedans in the Cadillac lineup. The ’21 CT4-V and CT5-V – both available with all-wheel drive – will remain in the market, slotting in between the standard base models and the Blackwings. The plan is to keep all three in the roster into the future. For now, the Blackwing variants will be rear-wheel drive only.

The Blackwing treatment brings the first substantial boost in power for both the CT4 and CT5, and the 668-hp rating for the CT5-V Blackwing and 472-hp mark for the CT4-V Blackwing represent modest increases over Cadillac’s previous CTS-V and ATS-V, which left the market in ’18. 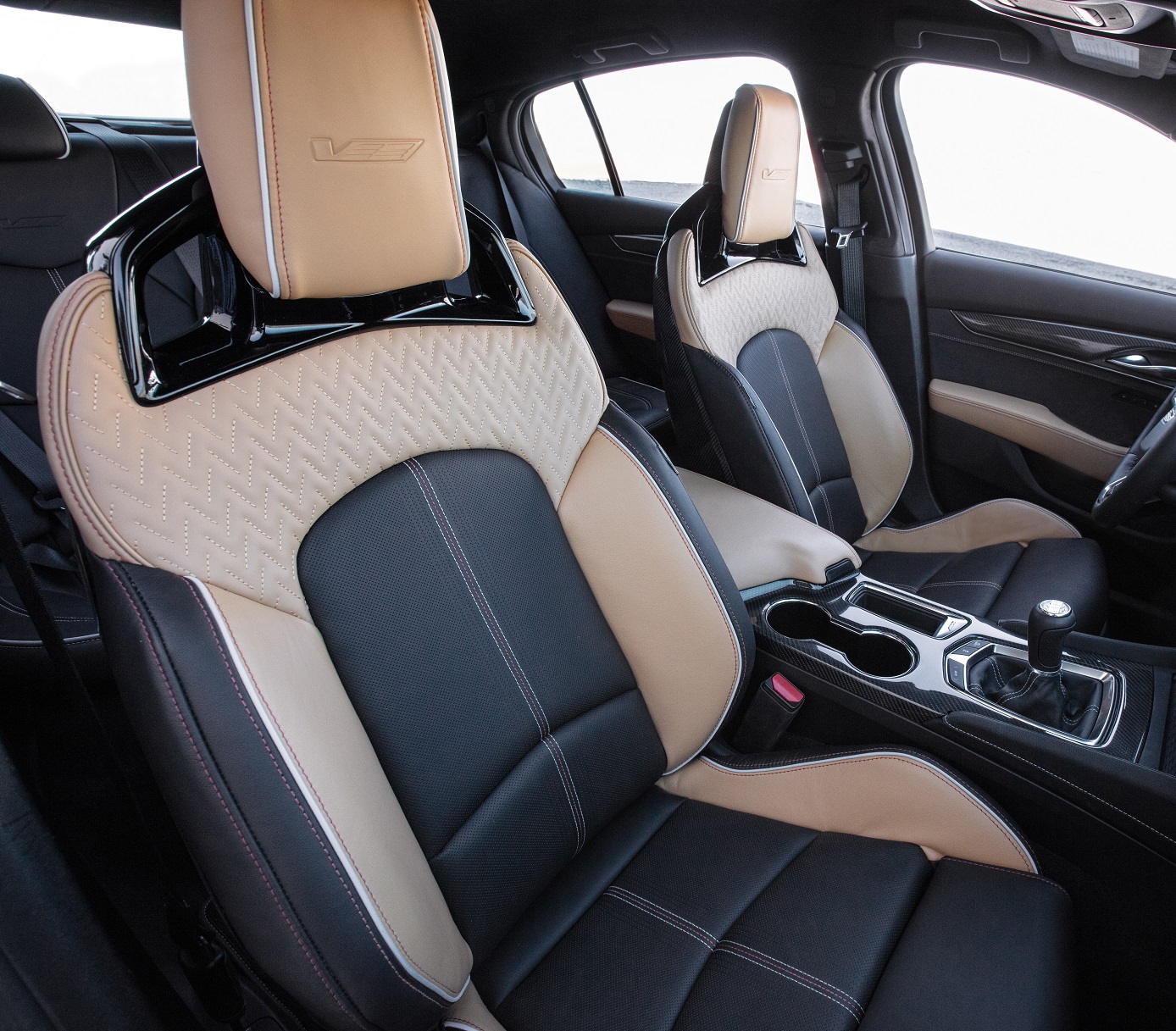 Also contributing to Cadillac’s most powerful production car ever are Rotocast aluminum cylinder heads better able to handle the heat and a high-output 1.7L four-lobe Eaton supercharger able to generate boost earlier in the rpm band.

As a point of clarification, Cadillac’s new high-performance sedans, oddly enough, do not offer the infamous Blackwing 4.2L twin-turbo V-8 that was designed for Cadillac and was available for only two model years, ’19 and ’20, in the CT6 sedan, which also died an extremely premature death.

Wards Intelligence data shows the Blackwing 4.2L engine was installed in a total of 1,256 vehicles during those two years before the V-8 ended production in Bowling Green. 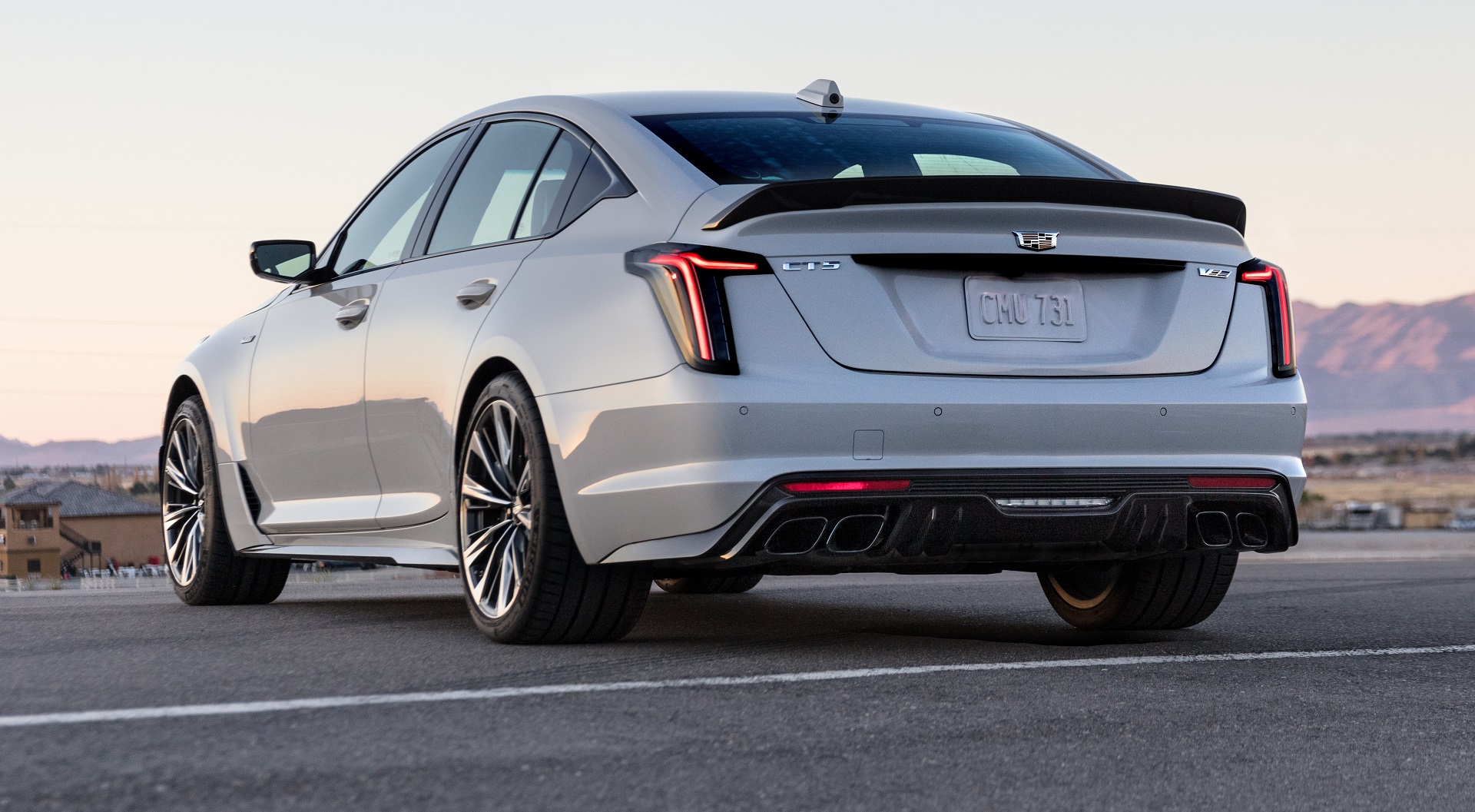 Quad exhaust at back end of 2022 Cadillac CT5-V Blackwing.