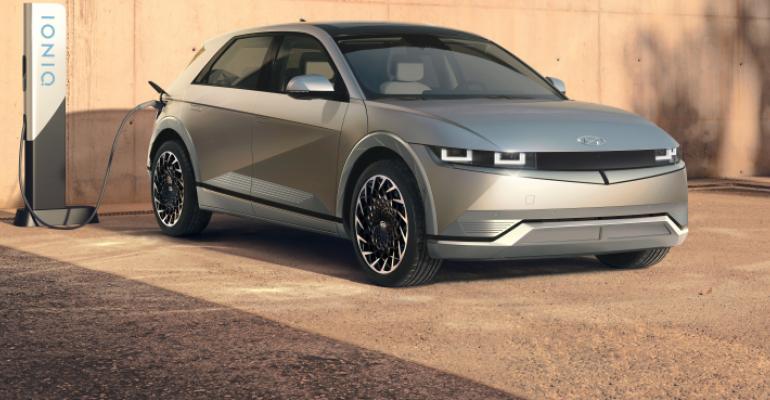 Hyundai’s new battery-electric midsize CUV represents both the company’s past and its very real future.

Called the Ioniq 5, the new BEV looks like it was blended together in a mixed-up time stream using design ideas from across the decades, encasing a powertrain that is firmly focused on what’s next.

The car’s angular hatchback profile is something Hyundai can pull off without charges of plagiarism. The company is proud to cite both the company’s first production car, the Hyundai Pony from the mid-1970s, and the Forty-Five concept from 2019 as inspirations for the Ioniq 5’s monocoque-style body.

The Pony never was sold in the U.S., but it did set the stage for Hyundai’s global expansion, and calling on that look for this new Ioniq model certainly was intentional, says SangYup Lee, head of Hyundai Global Design.

“We wanted to create something very unique and meaningful, with a message in the vehicle,” Lee says. “This is why we take our first car, the 1973 Pony, as our inspiration. That car was one of the first monocoque bodies and it has a lot of emotional touches to it.”

In styling the Ioniq 5, Hyundai couldn’t rely simply on a look from almost five decades ago. The designers had to keep in mind the new wave of BEVs that are changing the way cars look for the 22nd Century.

“We wanted to take the essence of [the Pony] and create something completely new,” Lee says. “You’ve never seen something like this before – a truly modern, contemporary vehicle. The balance tells a story [that] we are actually moving forward to the future by respecting the past. There’s a little bit of analog and more of the digital.”

The digital aspects come through – from the autonomous and safety technology to the “Parametric Pixel” design theme.

Available aero-optimized, 20-in. wheels match the theme, and the car has pop-up door handles as well. On the analog side, there are a number of sustainably sourced materials used in the Ioniq 5’s interior (pictured below), including plant-based yarns, eco-processed leather and bio paint with plant extracts.

The Ioniq 5 will be the first vehicle from Hyundai’s new, dedicated BEV brand, also called Ioniq. In the coming years, the brand will grow to include an electric sedan called the Ioniq 6 and a large battery-electric SUV called the Ioniq 7. 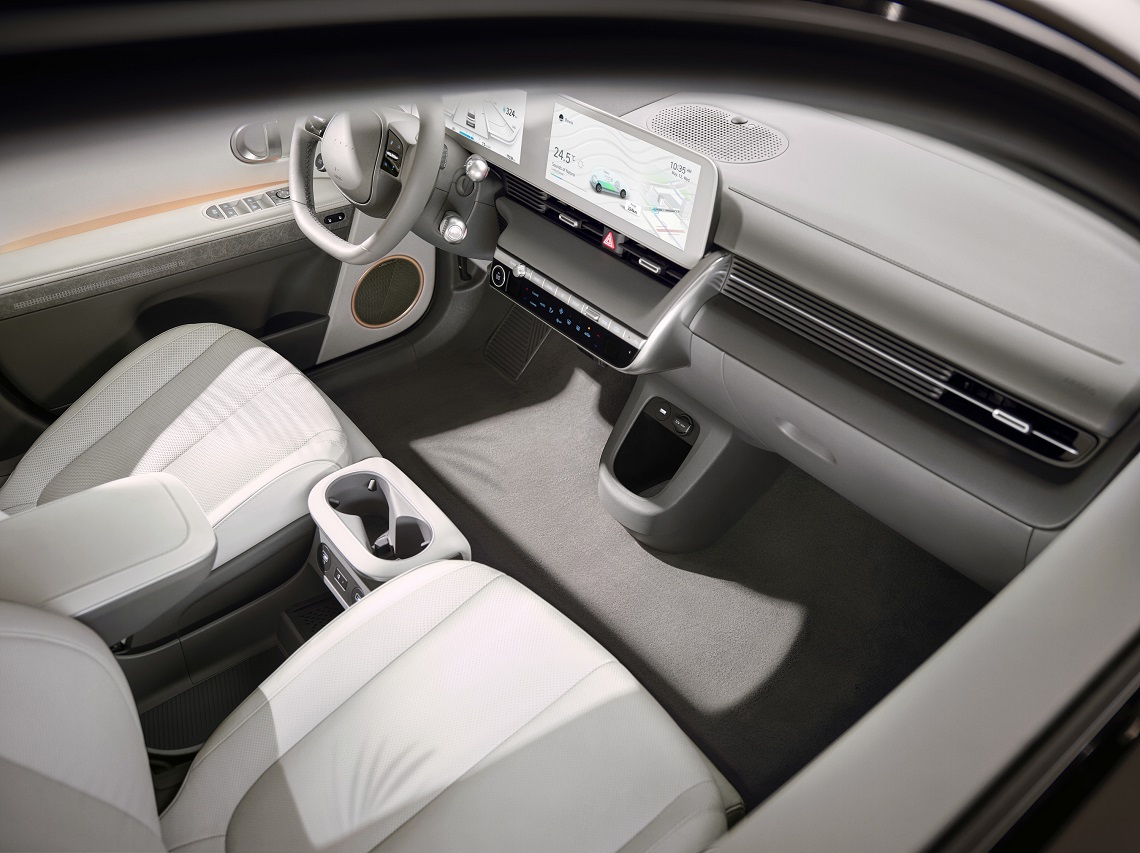 The Ioniq 5 offers autonomous driving technologies, such as automatic lane change (just activate the turn signal), automatic deceleration in curves and proactive accident prevention. The Ioniq 5 also can automatically park itself in diagonal or parallel spaces.

The new BEV will be the first production vehicle to use Hyundai’s new Electric-Global Modular Platform (E-GMP), which also will fit under battery-powered vehicles – including sedans, SUVs and CUVs – from the Hyundai, Kia and Genesis brands.

Hyundai says the Ioniq 5 was meant to explore features and capabilities that are not possible with traditional internal-combustion-engine vehicle platforms.

For example, since the E-GMP gave the designers a flat surface to work with, the Ioniq 5 is larger on the inside than it looks from the outside.

It may take non-EV drivers a while to understand how the proportions are created here, but the Ioniq 5 has a 118-in. (3-m) wheelbase – 4 ins. (100 mm) longer than the Palisade SUV – and short overhangs that give it an exterior size that would traditionally put it among C-segment SUVs, except that the Ioniq 5 has the interior space of a midsize or even large SUV, Lee says.

The interior also will feel different than traditional vehicles because the front seats recline almost flat and come with an extendable leg rest. The armrest between the two front seats – Hyundai calls it the “Universal Island” – can slide backward to either open up space in the foot well or to make it easier for rear seat passengers to climb in.

The Ioniq 5 (pictured above) will be the first Hyundai vehicle to use digital side cameras instead of traditional side mirrors – a technology that will be employed only in Korean models.

If you just need a quick top-off, the same setup can pump 62 miles (100 km) of range into the pack in five minutes. The Ioniq 5 also will offer what Hyundai calls Vehicle-to-Load (V2L) output.

The V2L function runs at up to 3.6 kW of power and will allow drivers to use the battery to power electric devices using one of two standard outlets – one by the rear seats and the other on the outside of the vehicle near the passenger taillight, even when the car is off.

Globally, Hyundai says it hopes to sell 70,000 Ioniq 5 BEVs by the end of 2021. The vehicle will launch in Europe and Korea by this summer and will go on sale in the U.S. sometime this fall. Pricing and details on which features will be available on the Ioniq 5 sold here will be available closer to launch. 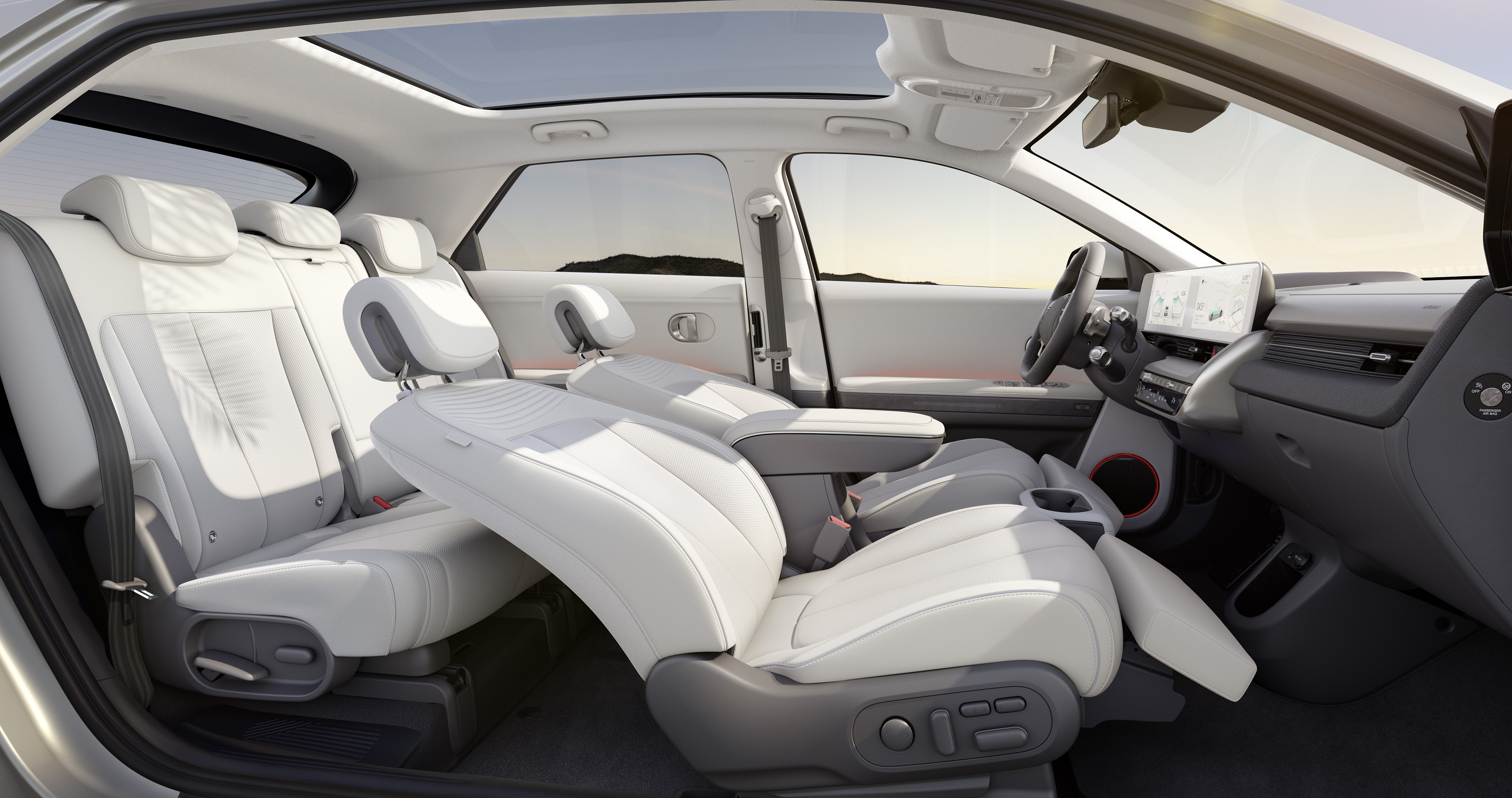