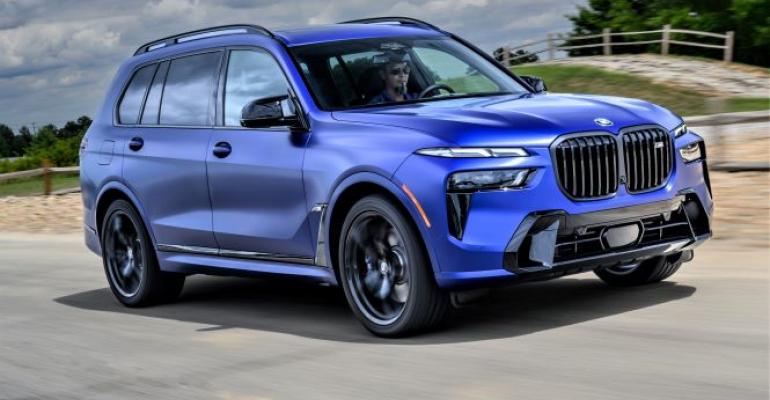 BMW
Until now, North America has accounted for more than 27% of X7 sales worldwide, making it the largest market by far for BMW's largest CUV. Expect this trend to continue with the facelifted model.
Vehicles

SPARTANBURG, SC – BMW is bringing changes to the X7.

The ’23 model driven here for the first time receives what is possibly the most comprehensive midcycle facelift of any BMW to date, infusing the U.S.-built CUV with fresh sales appeal just over three years after its introduction to the North American market.

With heavily altered front-end styling, the X7 now boasts clear visual ties to the recently unveiled fifth-generation 7-Series. They include a new split headlamp treatment (pictured, below) that places the daytime running lights and indicators above and LED main beams below, as well as an illuminated grille as standard on the top-of-the-line M60 xDrive driven here and a restyled hood. 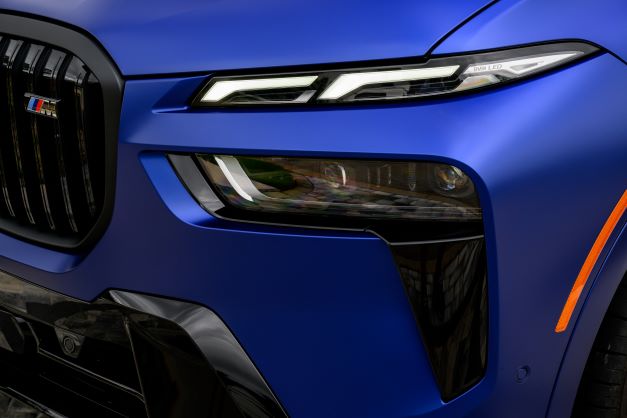 It looks less like a big brother to the X5 than before.

For the first time on any BMW model, buyers can specify 23-in. wheels in two different designs. New M-Sport and M-Sport Pro styling packages bring an added dash of boldness to the exterior by way of uniquely designed bumpers and a series of black accents among other touches.

The X7 also gets a significant interior upgrade (pictured, below), with a newly styled dashboard featuring a curved display panel similar in style to that used by the iX. It combines a 12.3-in. (31-cm) display for the instruments and a 14.9-in. (38-cm) central display for the infotainment functions. All are controlled by BMW’s latest ID8 operating system with altered menus and added functions compared to the ID7 system used up to now. 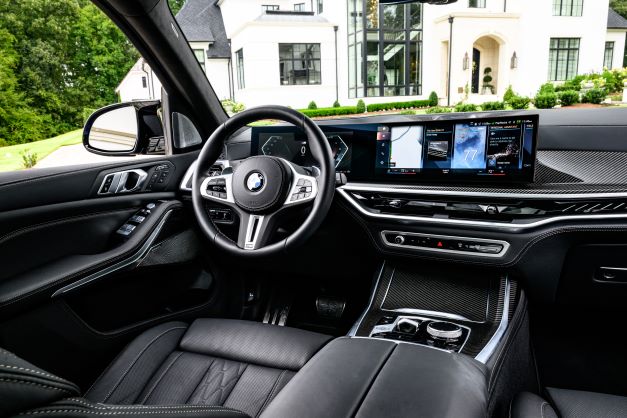 The new dashboard receives revised air vents as well as a light band within the trim element with X7 graphics. The analog ventilation controls of the older model are replaced by a complex set of digital controls within the central display.

The gear lever of the earlier X7 also makes way for a compact gear selector slider, again similar to that used by the iX, within a new-look center console housing plenty of storage space and two large cupholders. Manual gear changes are now performed exclusively via the steering-wheel-mounted paddles.

Outright roominess continues to be one of the X7’s biggest draws; with the choice of either a 6- or 7-seat layout, it is agreeably versatile and luxurious. With the rearmost seats in use, though, cargo capacity shrinks to just 10.6 cu.-ft. (300 L).

With a more contemporary OS8 electrical architecture comes a host of new driver assistant functions, including a more advanced Front Collision Warning system as standard and an optional autonomous Parking Assistant Professional function that allows you to store up to 10 preset maneuvers and command the X7 to park itself over distances of up 318 yds. (200 m).

All the various changes are aimed at providing the 204.1-in. (5,184-mm) -long CUV with a more upmarket feel and positioning as BMW attempts to win over customers who may otherwise be considering rivals such as the Audi Q7 and Mercedes-Benz GLS.

The X7 ranked only behind the Acura MDX in first-half 2022 sales in Wards Intelligence’s Large Luxury CUV segment with 14,168 deliveries, up 25.6% from a year earlier.

Central among the changes to the X7’s engine lineup is the introduction of BMW’s latest turbocharged 3.0L gasoline straight-6.

It receives new 48V mild-hybrid properties via a crankshaft-mounted starter-generator integrated into the front section of the standard 8-speed ZF-produced automatic gearbox, endowing it with electric boosting for added performance and engine-off coasting functionality for improvements in overall efficiency.

It’s the range-topping X7 M60i xDrive that we focus on here, though. The successor to the X7 M50i xDrive is the first model to receive BMW’s new S68 gasoline engine (pictured, below). 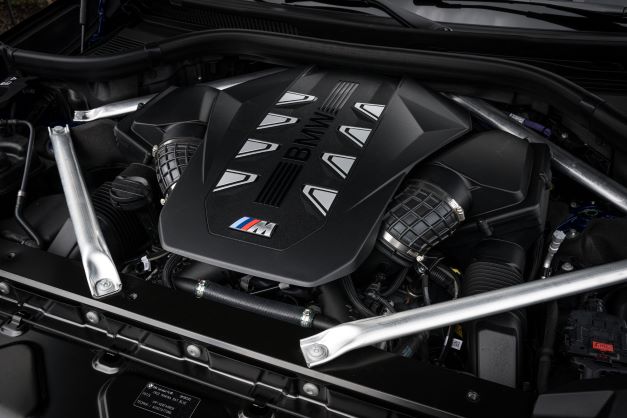 A development of the old N63 engine, the turbocharged 4.4L unit also adopts mild-hybrid functions. Nominal output remains the same as before at 523 hp and 553-lb.-ft. (750 Nm), although the electrification measures provide an added 12 hp and up to 148 lb.-ft. (201 Nm) of torque under acceleration, says BMW.

The new V-8 imbues the X7 with truly effortless mile-eating qualities and a smooth and collected character, striking an appealing balance between all-out performance under more extreme loads and refined civility during part-throttle cruising.

The accompanying soundtrack is rich and entertaining, too; though with such outstanding refinement and excellent noise isolation within the cabin, its deep growl in Sport mode is always a distant delight.

The quick action and smooth nature of the gearbox add to the driving experience, making the most of the added performance brought on by the electric motor. This is particularly noticeable around town, where the X7 M60i xDrive delivers smooth and muscular step-off qualities despite its considerable weight.

That said, the X7 M60 xDrive is just as happy to waft along in taller gears in Comfort mode out on the highway. With plenty of torque and flexibility from the engine, it is delightfully calm and quiet at speed.

The ride on the new 23-in. wheels, which are shod with 275/40 and 315/35 profile Pirelli P-Zero tires, can get a little fidgety owing to its underlying tautness on some surfaces, though the excellent compliance provided by the advanced underpinnings ensures it is never uncomfortable or uncompromising even in Sport.

Until now, North America has accounted for more than 27% of X7 sales worldwide, making it the largest market by far. Expect this trend to continue with the facelifted model, which retains the intrinsic character and well-engineered feel of its predecessor but adds a number of important improvements and functions to increase the overall driving appeal, technical standing and luxuriousness of BMW’s largest CUV. 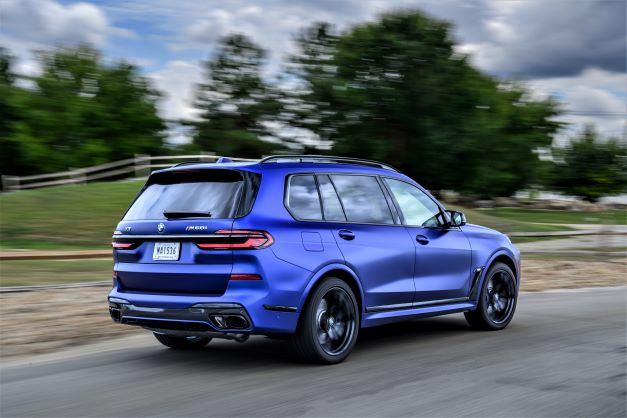