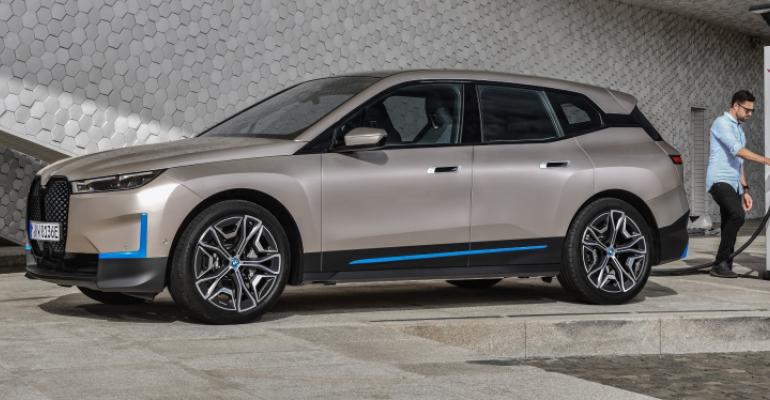 Due late next year, the new five-seat battery-electric SUV will offer up to 500 hp from two motors, fulltime all-wheel drive, a 0-62 mph time of less than 5.0 seconds and expected range of “over 300 miles.”

With a planned start to North American deliveries during the fourth quarter of 2021, the five-seat SUV will offer up to 500 hp from two electric motors, fulltime all-wheel drive, a 0-62 mph (100 km/h) time of less than 5.0 seconds and expected range of “over 300 miles” (483 km) in top-trim guise, according to preliminary data revealed by BMW’s head of R&D, Frank Weber.

The crossover is BMW’s second dedicated full-electric production model after the 7-year-old i3, and its fourth overall, following the recent launch of the smaller, rear-wheel-drive X3-based iX3, which is not sold in the U.S.

The iX name was chosen, says Weber, to signify the new model’s positioning at the head of the company’s “i” lineup, where it will compete against the Audi e-tron quattro, Mercedes EQC 4Matic and Tesla Model S and ES8, among others.

“Outside, it is the size of the latest X5. Inside, it offers accommodation and load-carrying space comparable to the X7,” he says of the SUV that benefits from the expertise BMW has gained in carbon-fiber construction with models such as the i3 and recently discontinued i8 plug-in hybrid sportscar.

The iX, which goes under the internal codename i20, represents a sharp detour from BMW’s previously announced plan to base its future electric models on the same platforms as its existing gasoline, diesel and plug-in hybrid models, premiering a new aluminum spaceframe that supports an inner carbon-fiber reinforced plastic (CFRP) structure, including sill elements, and a body made out of a combination of aluminum, composite plastic and CFRP.

The advanced platform is described by Weber as a “totally new development” that has no relationship to the LifeDrive structure originally developed for the i3, though he says it is highly compatible with the chassis used by the 3-, 5-, 6-, 7- and 8-Series as well as the X3, X4, X5, X6 and X7, hinting key elements of its engineering will be used by other new BMW i sub-brand models in the future. 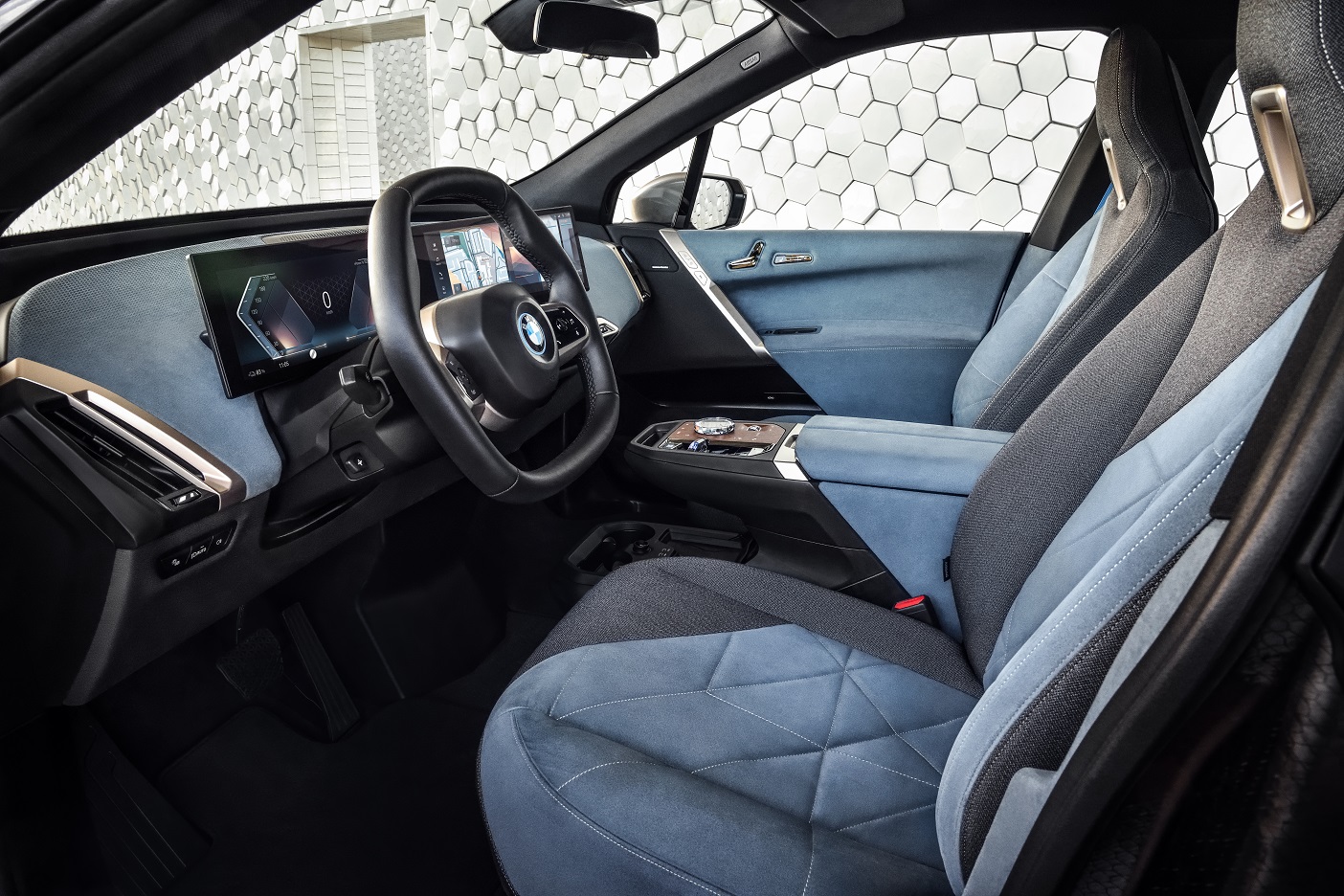 This sharing of chassis components is key to allowing BMW to produce the iX alongside the 5-, 6-, 7- and 8-Series at its Dingolfing factory in Germany.

The plastic composite used for the grille uses a nanoscale vacuum-based coating that, BMW says, provides self-healing properties: Surface scratches can be repaired within 24 hours at room temperature or through a five-minute supply of warm air.

A series of aerodynamic developments contribute to a claimed drag coefficient of 0.25.

The fourth model from BMW’s i sub-brand channels its power to all four wheels via a single-speed gearbox. No specifics to the nominal drive split between the front and rear axles have been divulged, though it is expected to feature a typical rear-wheel-drive bias. 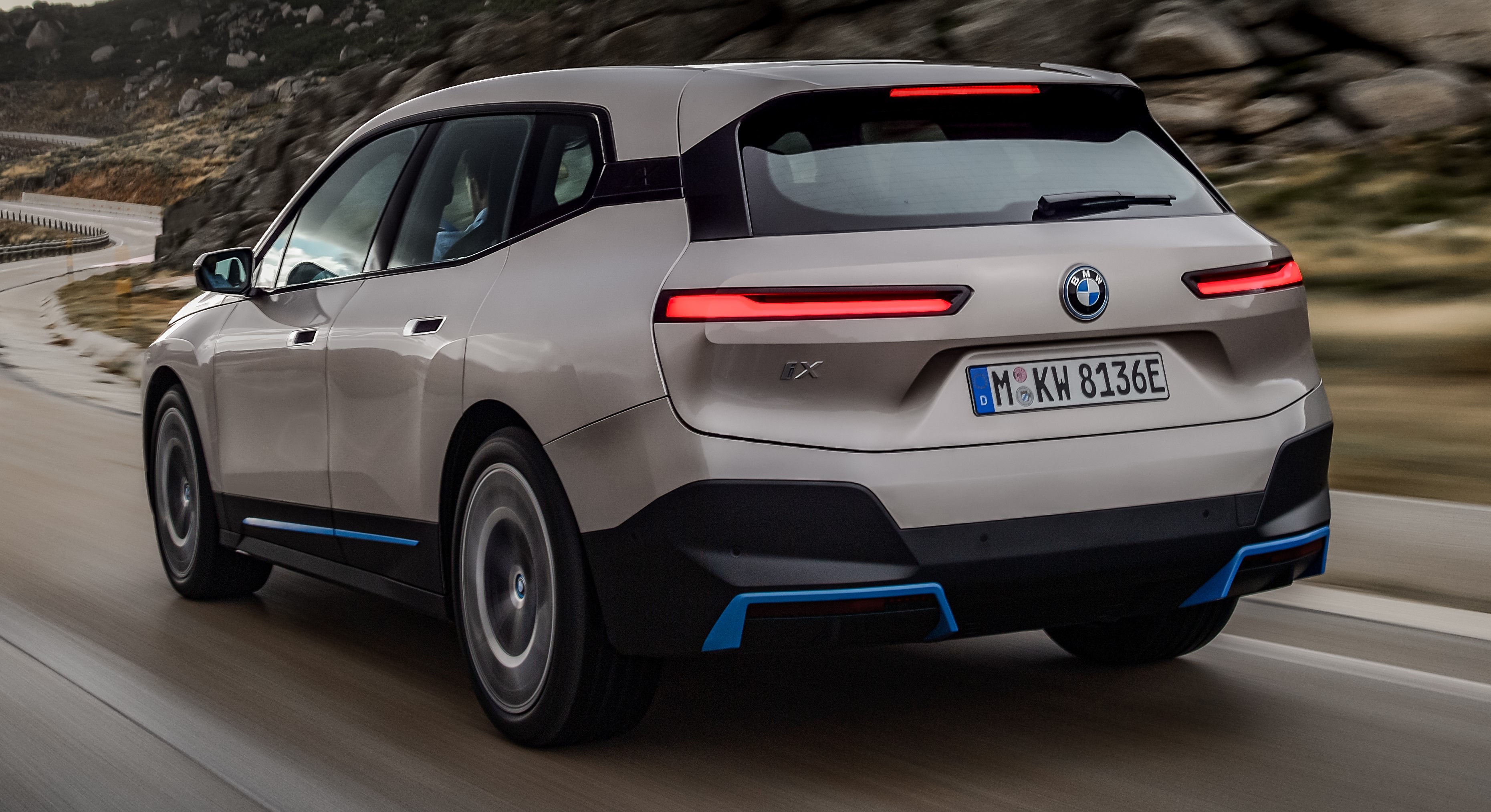 BMW says the iX will be offered with different battery options ranging to a “100-kWh plus” unit. With a claimed average power consumption of 21.0-kWh per 100 km (62 miles), the new SUV is claimed to achieve a range of “over 300 miles” on the ESP FTP-75 test procedure.

The iX’s new charging system enables optional DC fast charging at up to 200 kW, allowing the battery to be charged from 10% to 80% capacity in under 40 minutes or, put another way, a 75-mile (121-km) range in 10 minutes. The standard charger operates at 11 kW, which provides the same 80% charge in 11 hours from a wall socket.

The iX features a spacious interior with a flat floor and natural materials such as open-pore wood (pictured below) that BMW says are intended to provide lounge-like qualities. 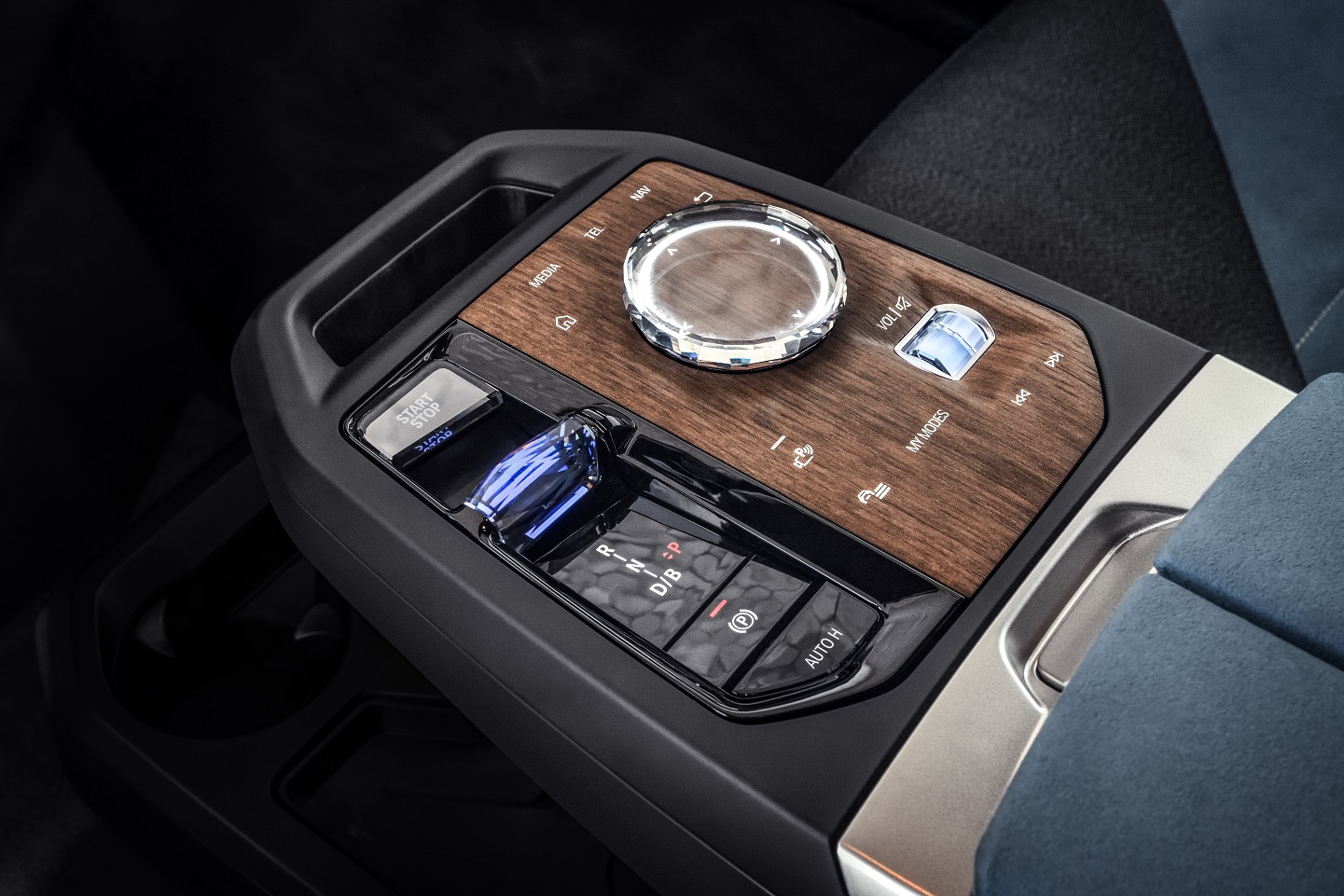 There’s a hexagonal-shaped multi-function steering wheel (pictured above), while the instruments and infotainment functions are grouped together in a lightly curved digital display panel connected to the dashboard on a plastic mount and within a newly designed head-up display.

There is no center console. Instead, the controls, including a rocker to select the drive mode and a newly designed version of BMW’s iDrive rotary controller, are set within the forward section of a high-mounted armrest. Other controls are set within the upper part of the door panels.

Like the exterior, the interior shuns chrome elements for galvanized plastic. Among the options is a full-length glass roof with electrochromic shading and a bespoke 655-watt Harman Kardon Surround Sound audio system.

The front seats, positioned at a height described as similar to the those of the X5, feature integral headrests, while the rear bench (pictured below) is set low to maximize headroom. There is no third-row seat option.

Despite basing the new iX on a dedicated aluminum spaceframe and carbon-fiber structure, Weber says the company is holding firm to plans to use both its FAAR (front architecture) and CLAR (cluster architecture) platforms for other upcoming electric-powered models – the latter of which will underpin next year’s i4, which is based on the upcoming second-generation 4-Series GranCoupe. 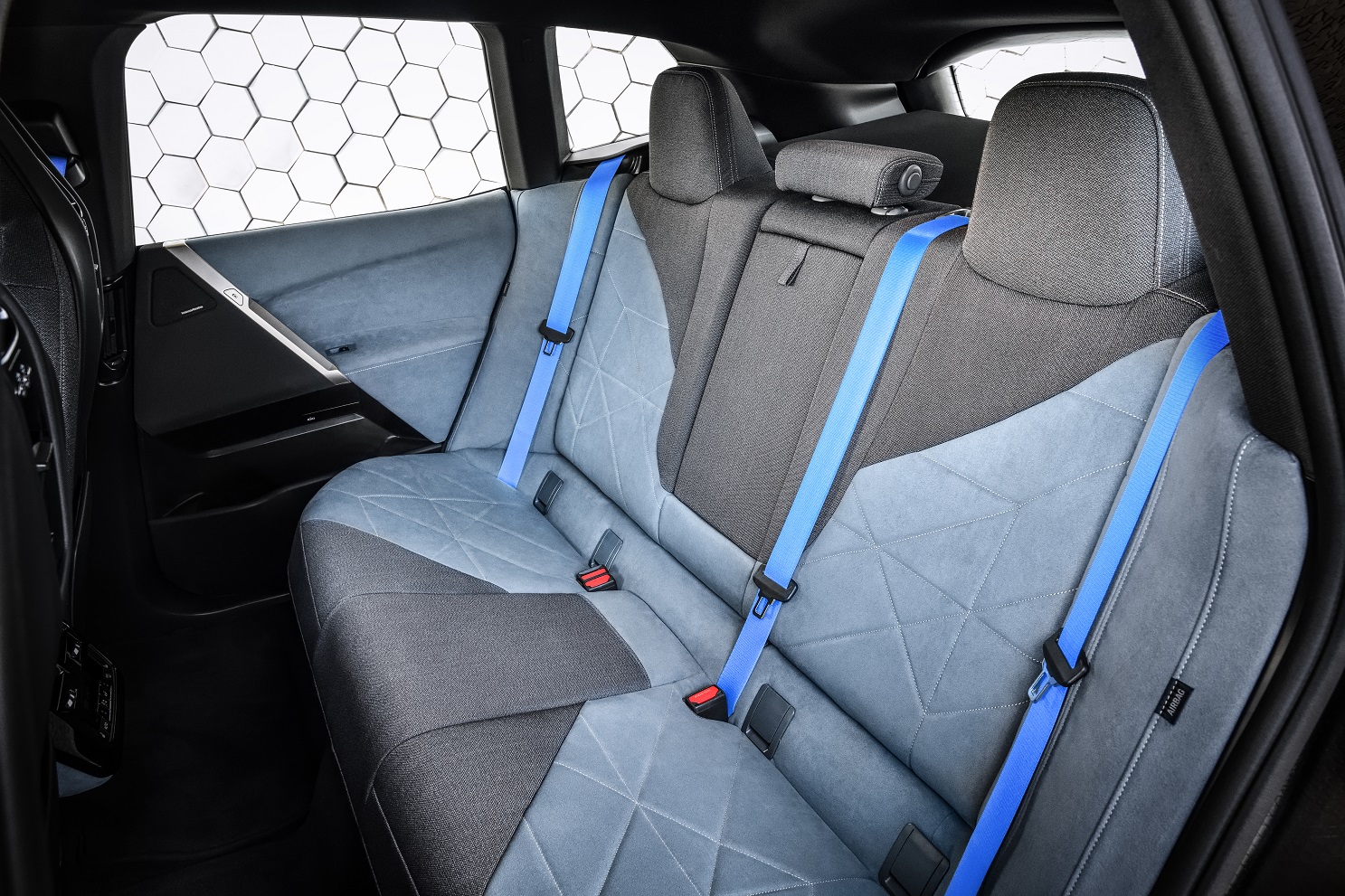