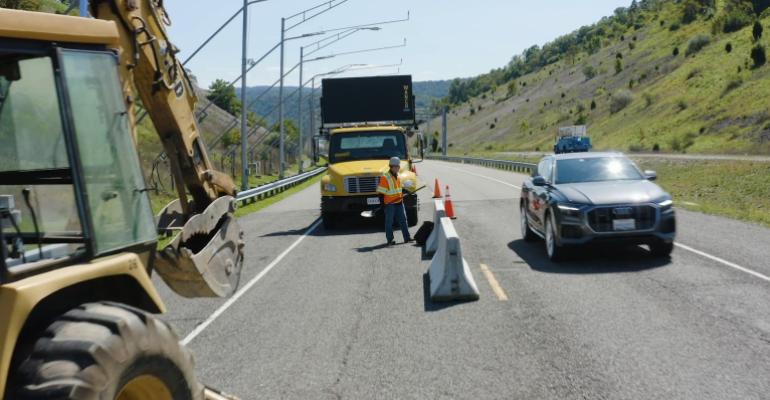 Pom Malhotra, Audi of America’s director of connected services, says while the automaker’s current tests are focused on road work and traffic lights, it could one day be applied to other situations, such as school bus loading and unloading and first responders.

Flashing lights and orange construction signs on the side of the road send a clear message: Look at me because I have important information. But what if a driver is distracted by Twitter or fighting kids in the back seat?

That’s where cellular vehicle-to-everything (C-V2X) can force vehicle occupants to pay attention to the changing world outside, connecting warning lights and signs directly to the cars. Throw in some worker safety vests that also talk to the network, and you have the construction site of the future.

This is exactly the kind of thing Audi of America is testing near its headquarters in Herndon, VA, along with the Virginia Department of Transportation, Virginia Tech Transportation Institute and network partners Commsignia, American Tower and Qualcomm.

The automaker used modified Q8 SUVs with special C-V2X devices installed to communicate with signals being used in road construction areas this past summer.

When the modified Q8s approach the construction site, alerts about road signs that have been enhanced with C-V2X beacons appear in the driver dash display and the car can request that the driver slow down if they’re exceeding the temporary work zone speed limit.

The appeal of C-V2X is that it can offer low-latency direct communications between vehicles, as well as with roadside infrastructure and “vulnerable road users” (i.e., construction workers) without needing a dedicated cellular network.

Pom Malhotra, Audi of America's director of connected services, says while the automaker’s current tests are focused on road work and traffic lights, it could one day be applied to other situations, such as school bus loading and unloading, school guard crosswalks and first responders. 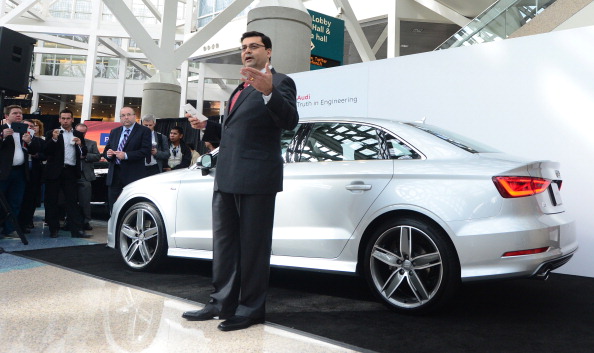 It’s not only the cars that can get warnings, but also those same vulnerable road users, who could receive notifications about oncoming traffic through connected vests or devices. The same technology could be applied to school backpacks, bicycles and smartphones, Malhotra says. The X really does stand for “everything.”

“The experience is designed to take advantage of both the existing communication over cellular networks and the new capabilities that can come through C-V2X to greatly improve the overall safety benefit that’s offered by connected services,” Malhotra says.

Cathy McGhee, director of research and innovation for the Virginia DOT, says improving work zone safety is not just about the people who work there.

Nationwide, approximately 700 people are killed and 35,000 people are injured in work zone crashes each year, and four out of five work zone fatalities involve drivers. With the right technologies, people in the work zone could even be alerted when a distracted driver is approaching. “There are great benefits to be gained,” she says.

Audi already uses some vehicle-to-infrastructure technology in its vehicles, introducing Traffic Light Information (TLI) for the 2017 model year. TLI puts a countdown timer in your car to let you know when the light will turn green.

Audi updated TLI with its Green Light Optimized Speed Advisory (GLOSA) in 2019 to let drivers know the proper speed for reaching an upcoming light when it’s green (pictured below).

The problem is that this technology doesn’t work everywhere. There are 15,000 intersections in 35 cities in the U.S. that currently send out signals that these Audis can use, but the automaker is working to increase this number.

Today, almost every car Audi sells in the U.S. can use TLI, but it costs $199 for 6 months ($499 for 18 months) as part of Audi's Connect Prime services. Malhotra says Audi has not yet decided if it will charge extra for C-V2X safety services or whether it will be included in another suite of connected services. 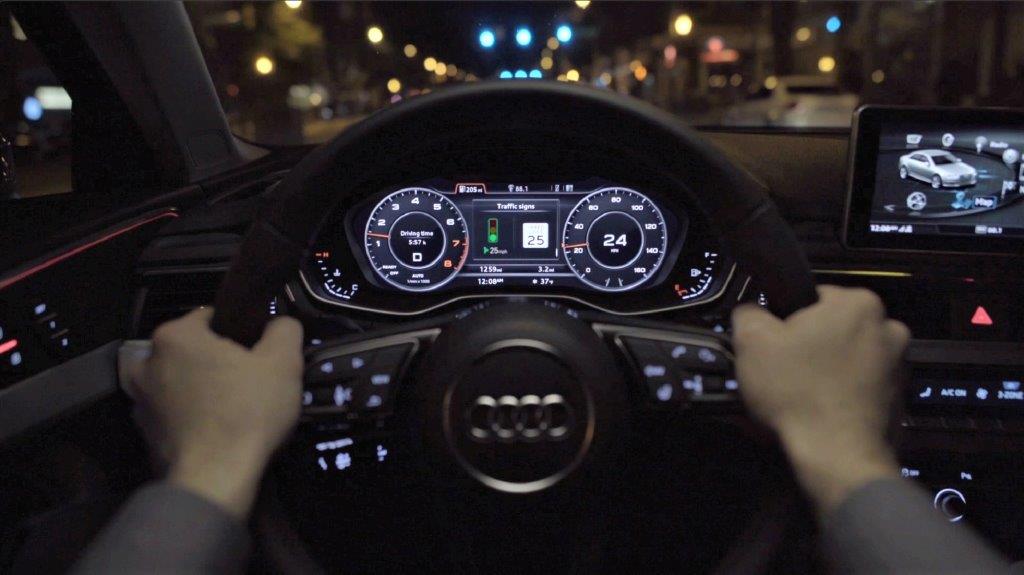 One reason Audi hasn’t made the decision is because it’s not even clear yet that the technology will be made legal in the U.S.

The wireless spectrum that C-V2X devices use has been part of a growing political fight since the FCC reserved part of the 5.9 GHz band back in 1999.

The New America think tank issued a white paper in July focused on the 5.9 GHz band that said, “while Wi-Fi is saturating the band immediately below 5.9 GHz and generating hundreds of billions of dollars in consumer welfare annually, the set-aside of 5.9 GHz for a specific auto industry use case and technology has proven an abject failure.”

Audi’s C-V2X technology uses part of the 5.9 GHz wireless communications band that the FCC has proposed to allocate for C-V2X devices that can enhance road safety.

Qualcomm has a special experimental license from the FCC that allows Audi to test C-V2X on public roads today. Whether we ever see it outside of these test beds in Virginia remains an open question.