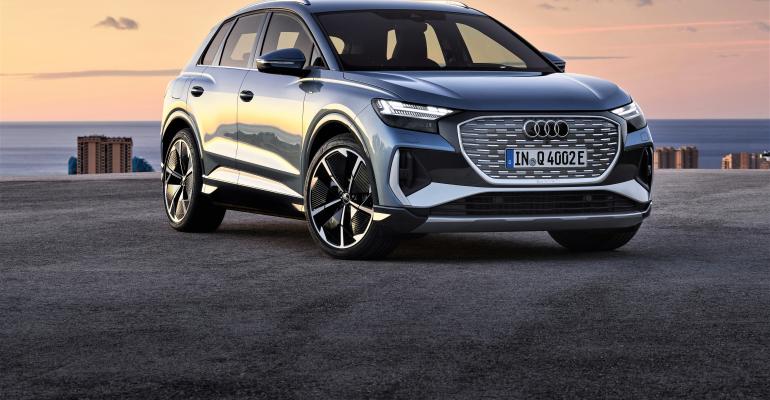 The individually styled SUV and Sportback models, closely related to the Volkswagen ID.4 sedan, will challenge the Tesla Model Y in the U.S.

INGOLSTADT, Germany – Audi reveals the Q4 e-tron before a planned start to North American sales and deliveries of the electric-powered SUV during second-half 2021.

Closely related to the Volkswagen ID.4 sedan, with which it shares its key structural elements and electric drive system, the Q4 e-tron will be offered in two distinct body styles. The standard SUV model emphasizes overall practicality, while a sleeker Sportback aims to be sportier with a high-riding coupe silhouette.

At the rear, the SUV receives an angled rear window within an upright tailgate, with the Sportback featuring a shallower liftback-style tailgate similar in design to that gracing the larger e-tron Sportback. As is customary on all Audi EVs, both boast a full-width taillamp with distinctive LED graphics. The wheels vary from a standard 19 to 21 ins. in diameter.

Inside (below), the German automaker’s latest EV adopts its own distinct design and dashboard architecture.

Key elements include a newly styled steering wheel with touch controls, a 10.25-in. (26-cm) digital instrument display and a standard 10.1-in. (26-cm) (optional 11.6-in. [29-cm]) centrally positioned MMI infotainment touch display combined with a “Hey Audi” voice control function as an option.

The Q4 e-tron is the first Audi to feature an augmented-reality head-up display, with information, including moving navigation commands, projected onto the windshield in two separate fields and with varying depth of field. 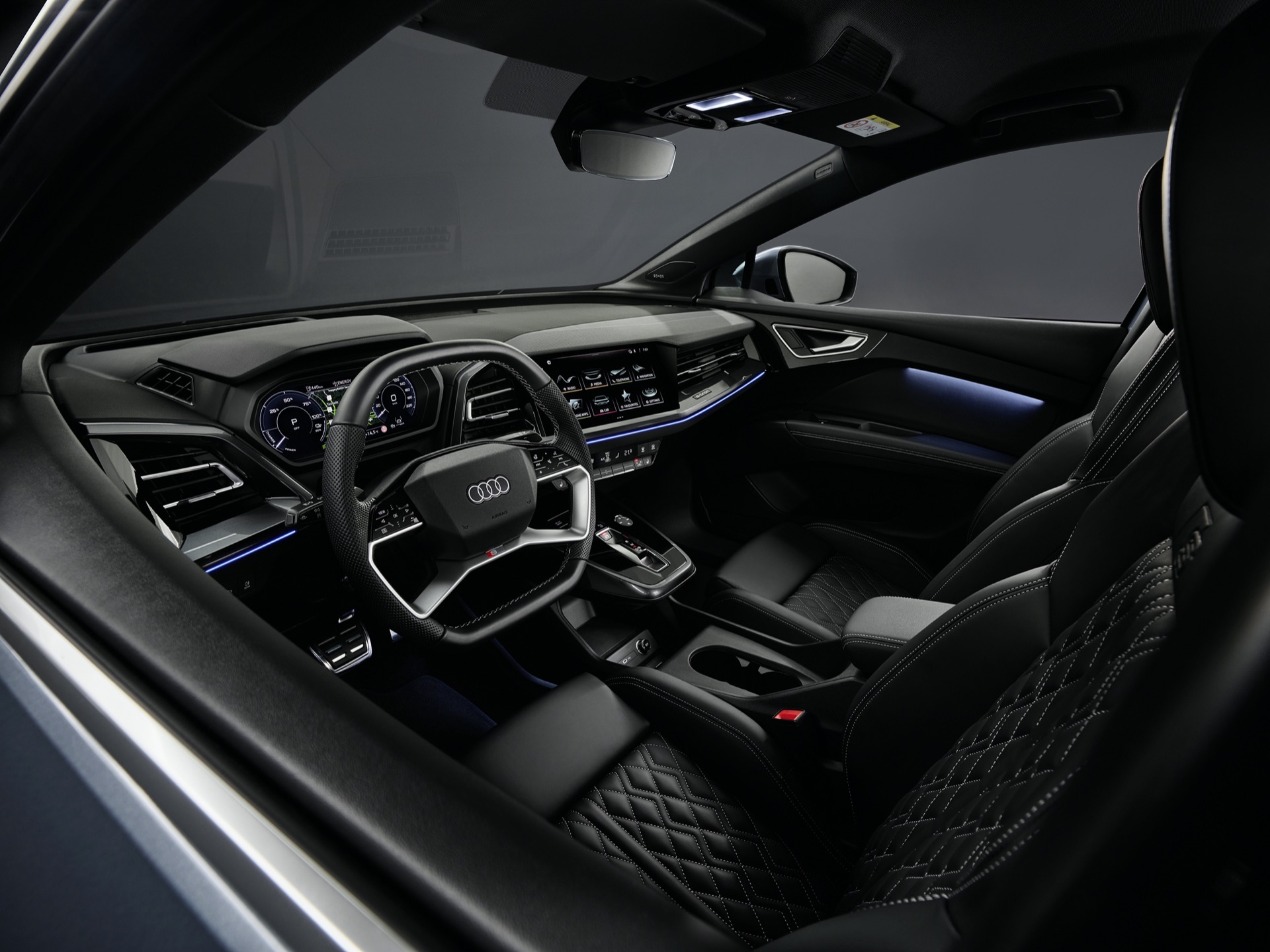 A series of compartments around the cabin, including generously dimensioned cupholders in the upper part of the doors, also offer nearly 1.0 cu.-ft. (28 L) of oddment stowage, according to Audi.

The power electronics system occupies the space underneath the hood.

The Q4 e-tron will be sold in Germany with the choice of three electric drivelines in both rear- and all-wheel drive. Details of the North American powertrains are yet to be made official.

The rear-wheel drive Q4 35 e-tron kicks off the lineup with a rear-mounted electric motor delivering 167 hp and 229 lb.-ft. (310 Nm) in combination with a 52-kWh (usable capacity) lithium-ion battery.

The Q4 e-tron SUV and Sportback are produced alongside the ID.4 at Volkswagen’s Zwickau factory in Germany. They will be joined before year’s end by the Cupra El-Born – a new electric-powered SUV from the SEAT-operated sub-brand sharing the same MEB platform and drivelines.

Additional assembly operations are planned to take place in a newly formed joint venture run by Audi and SAIC in Anting, China.

Pricing for Q4 e-tron models destined for sale in North America are yet to be confirmed. However, Audi officials suggest the starting price will be above the $39,999 MRSP of the Volkswagen ID.4 in a reflection of the brand’s more premium positioning and higher levels of standard equipment. 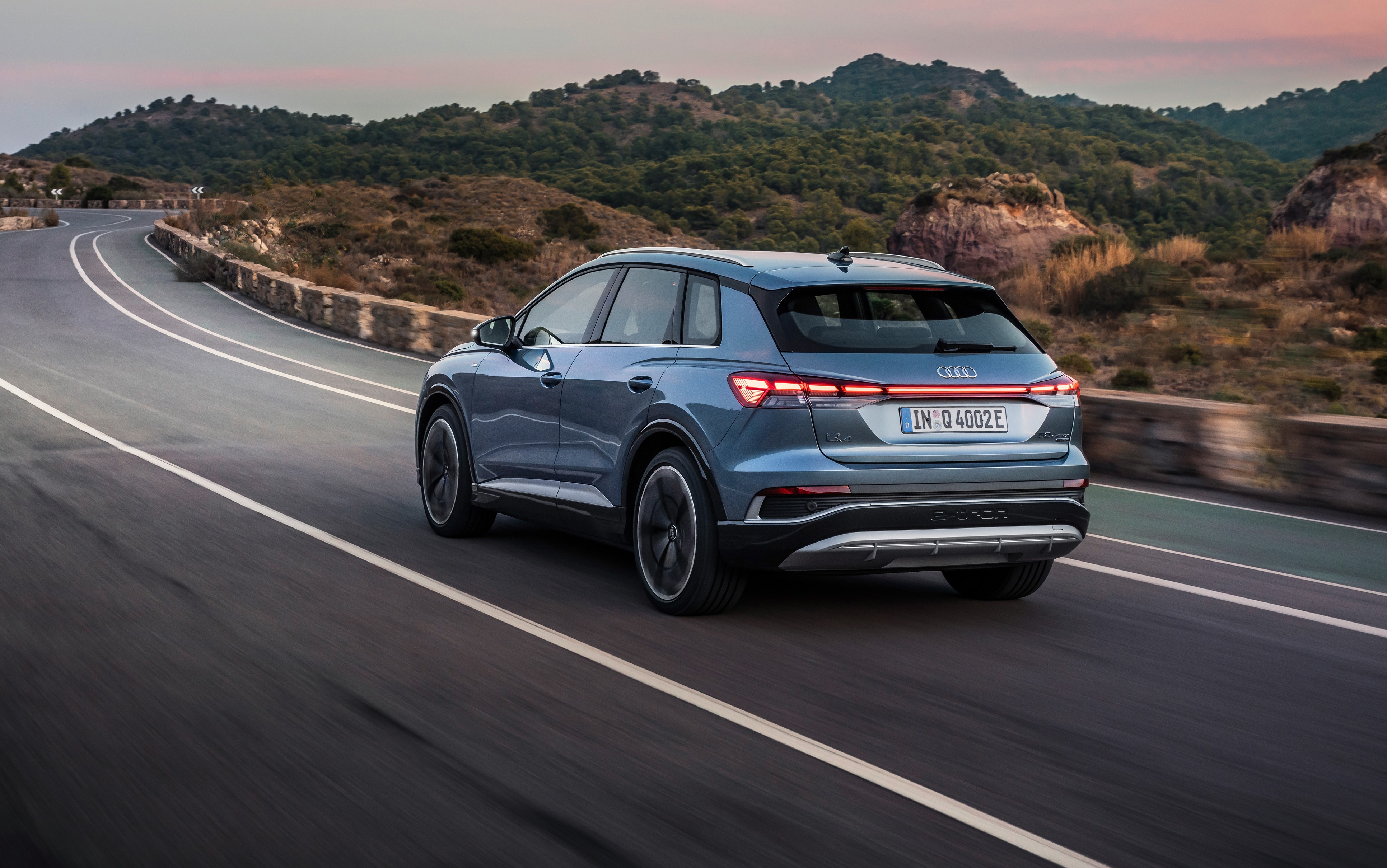 Audi Q4 e-tron sales to begin in North America in second half of 2021.