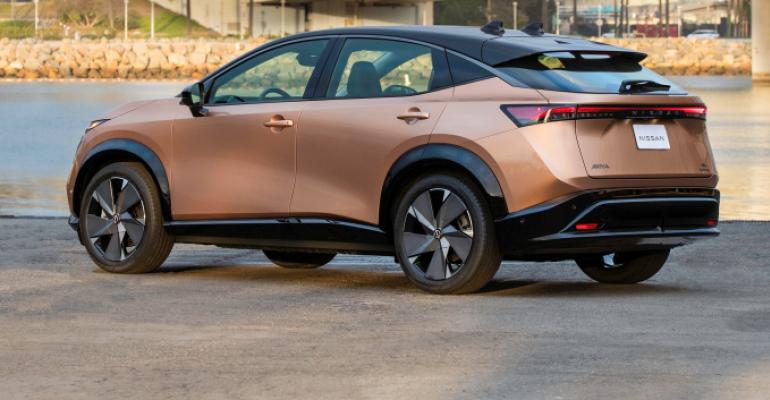 Nissan
Ariya BEV due in U.S. dealerships in autumn 2022.
Vehicles

The battery-electric CUV won’t arrive until next fall, and it’ll cost more than projected.

Nissan may have launched the first mass-market battery-electric car in the U.S., the Leaf, but that was 11 years ago.

At a gala event before the recent Los Angeles auto show, it revealed that U.S. buyers will have to wait a while longer for its second BEV, the Ariya crossover – and it’ll cost them more than expected, too.

The ’23 Nissan Ariya (display screen pictured below) won’t arrive in U.S. dealerships until sometime during autumn 2022. 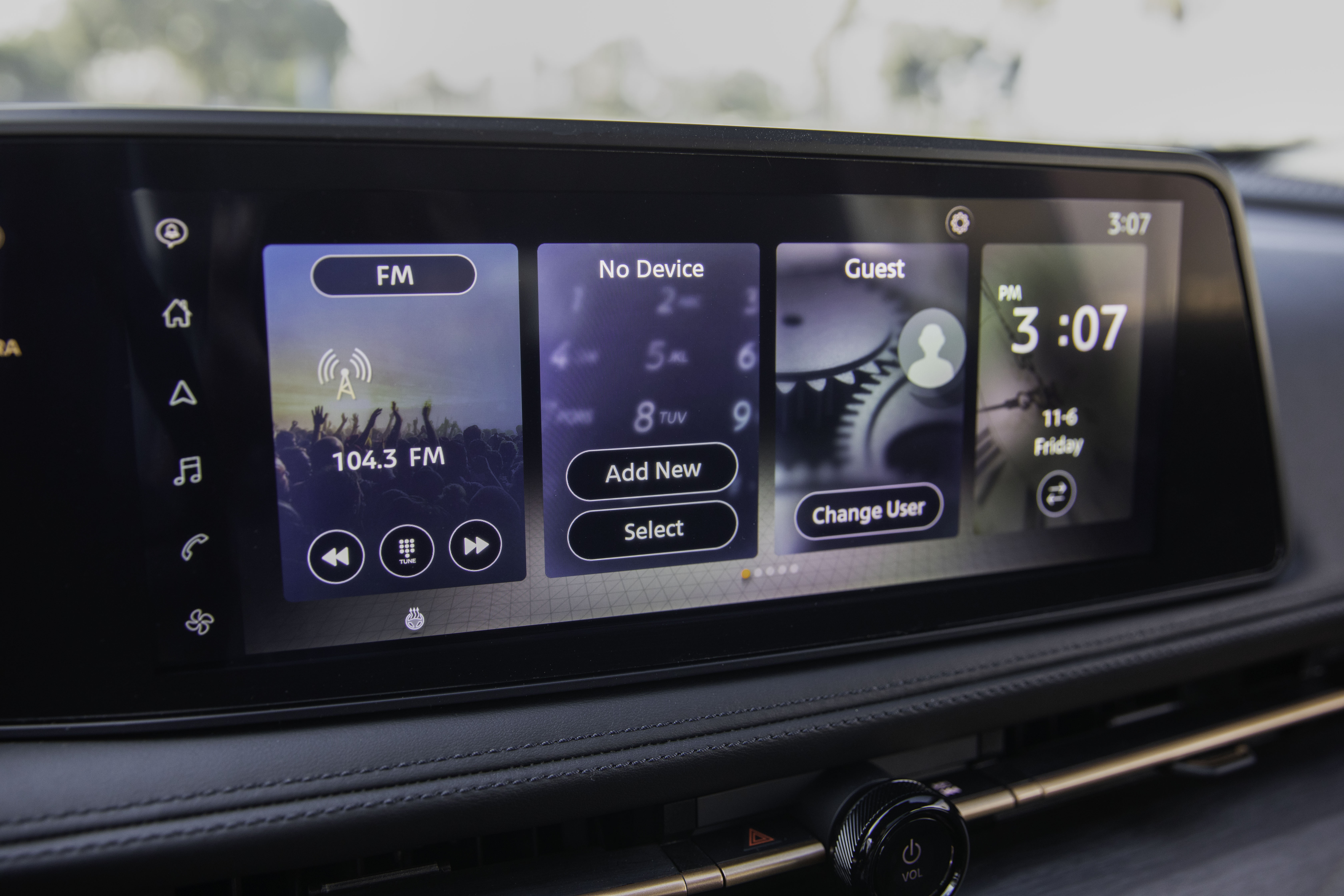 The company has opened a reservation list for interested buyers, but the price of the base Ariya is now $47,125 (including the mandatory delivery fee of $1,175). That contrasts with a projected price of about $40,000 in July 2020, when the production version was unveiled.

When the Ariya arrives, it will be one of half a dozen battery-electric compact CUVs on sale in the U.S. They include not only the Tesla Model Y, which pioneered the segment, but also the Ford Mustang Mach-E, Hyundai Ioniq 5, Kia EV6 and Volkswagen ID.4. Additional entries are expected in 2023 and later from Chevrolet and other makers.

They’re all pitched as small SUVs, though the need to reduce aerodynamic drag has made them lower, sleeker and less intimidating-looking than their combustion-engine counterparts – perhaps closer to jacked-up 5-door hatchbacks. (Just don’t use the “H” word; it’ll scare the shoppers.)

Buyers who want an Ariya (pictured below) with all-wheel drive (as many in wintry climes undoubtedly will) must opt for the top trim level, known as the Ariya Platinum+. 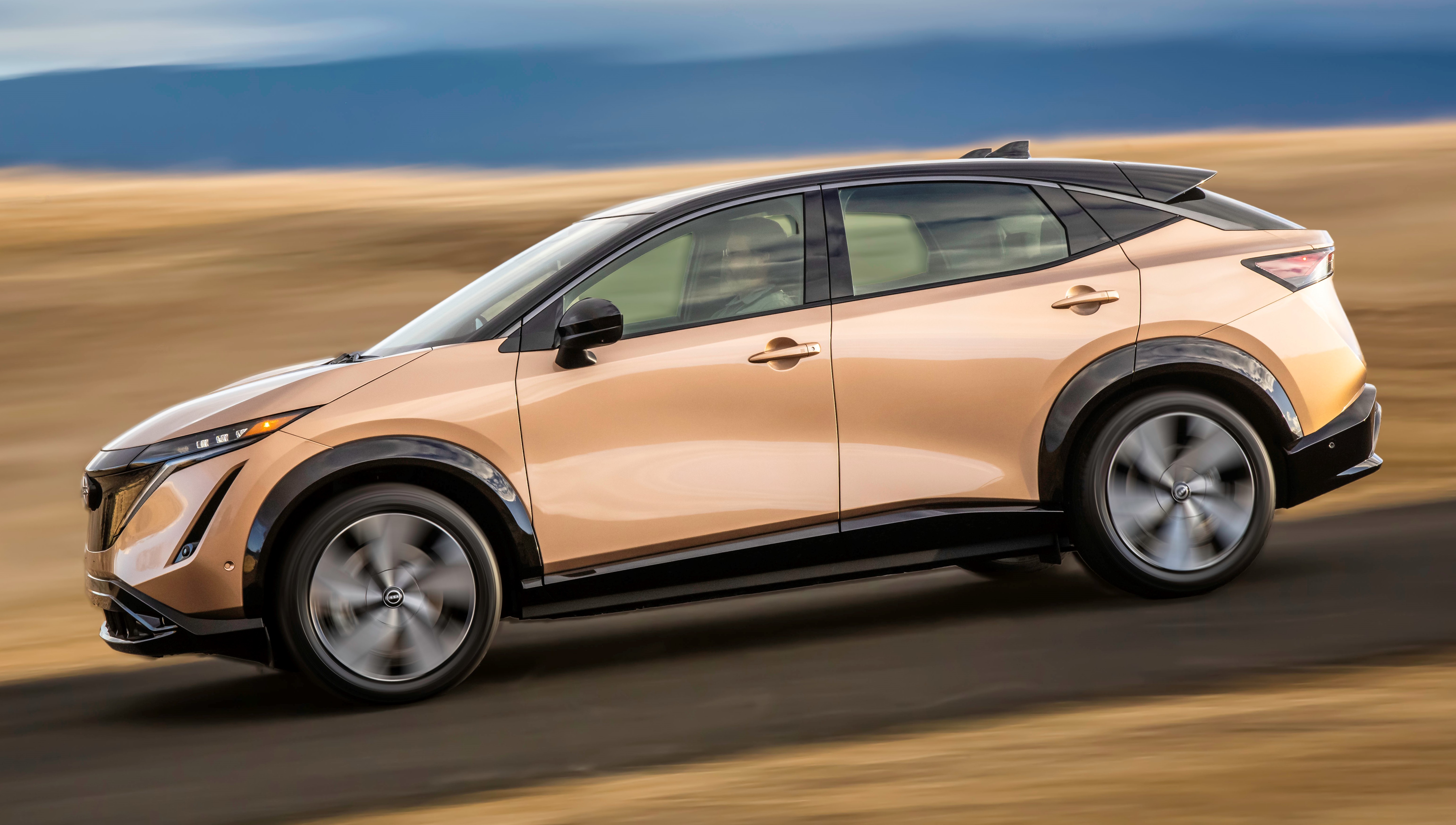 The base model with front-wheel drive is the Ariya Venture+, and two additional FWD models sit above it: Evolve+ and Premiere. All three have a peak output of 238 hp and an estimated range rating of about 300 miles (483 km).

A smaller 63-kWh battery option offered in other markets isn’t on the U.S. list, at least for the Ariya’s first year.

But if Nissan’s announced goal of 40% EV sales in the U.S. by 2030 is to be realized, we’ll likely see more vehicles on the same underpinnings from the brand and its alliance partner Mitsubishi.

Known as the CMF-EV platform, it will be used by all members of the Renault-Nissan-Mitsubishi Alliance. The Renault Megane E-Tech Electric just unveiled in Europe is one example, though it won’t come to North America. 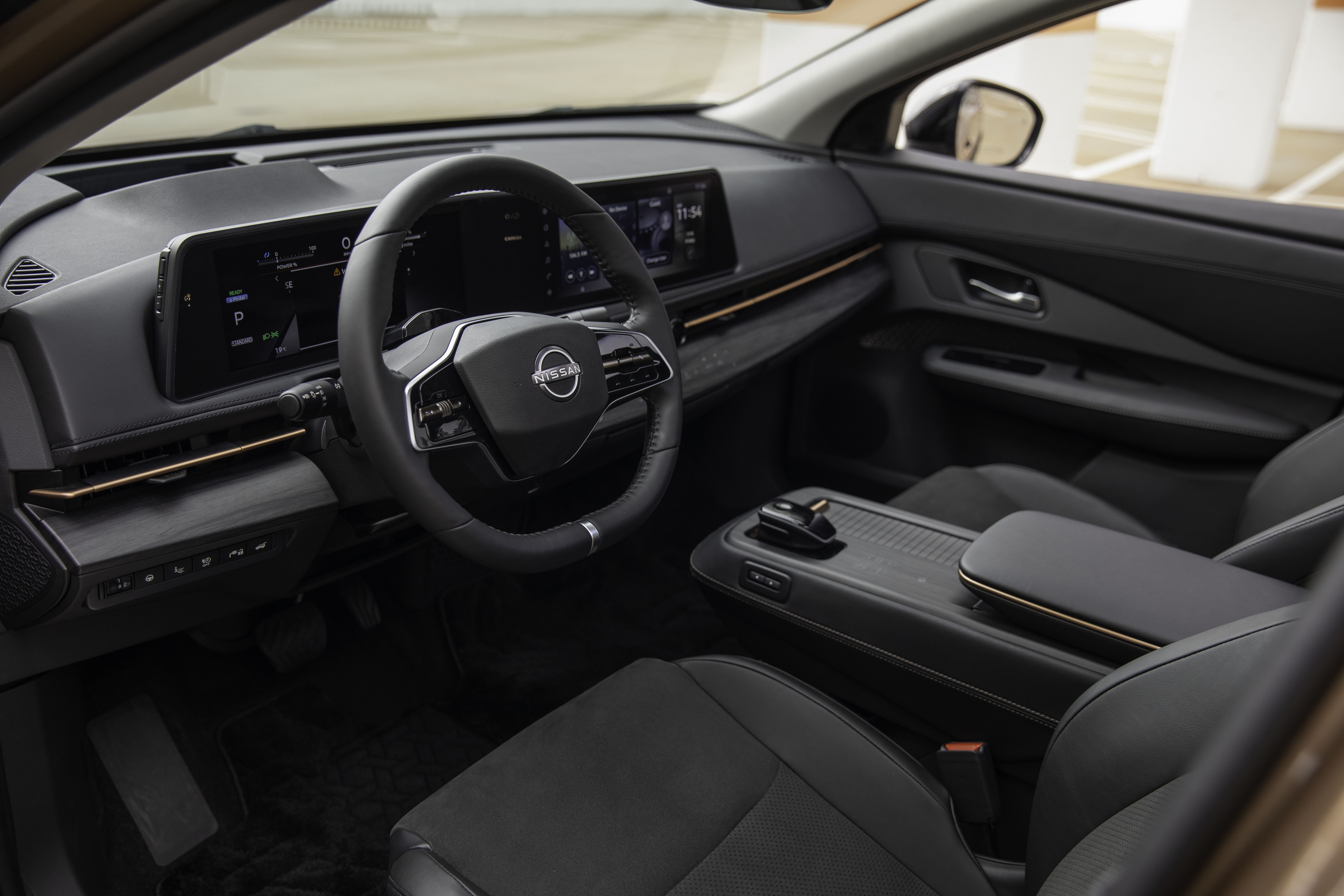 While battery-electric propulsion is the Ariya’s main distinguishing feature, the compact utility also serves as a technology halo vehicle for the brand – as did the Leaf for a while. All Ariya models (interior pictured, above) have a 12.3-in. (31-in.) digital instrument cluster behind the wheel and a second 12.3-in. display, this one a touchscreen, in the center of the dash.

A color head-up display is also standard, along with two forms of voice-command recognition: Amazon Alex or an in-house system by Nissan. Android Auto and Apple CarPlay are standard. 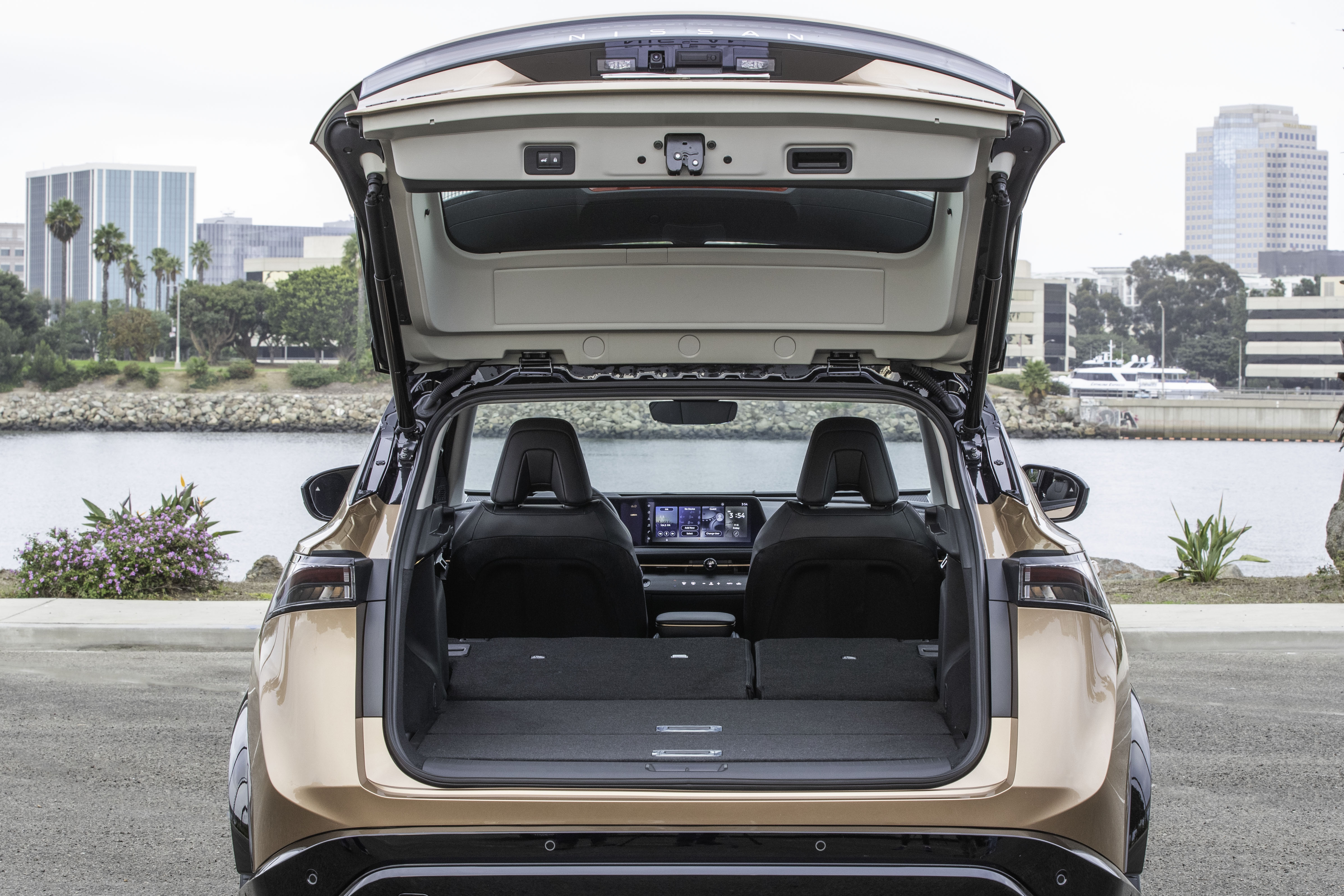 The ProPilot 2.0 driver-assistance system will keep the car within its lane at a steady speed or safely behind the vehicle ahead but requires the driver to keep hands on the wheel. Drivers still handle lane changes, passing slower vehicles and changing routes. LED lights, ambient cabin lighting and 19-in. wheels are standard on all models.

Meanwhile, the Leaf will apparently survive into the 2022 model year and perhaps beyond.

Nissan has been tight-lipped about the future of the aging electric hatchback, though it has continued to make subtle upgrades, including a telescoping steering wheel a couple of years ago. 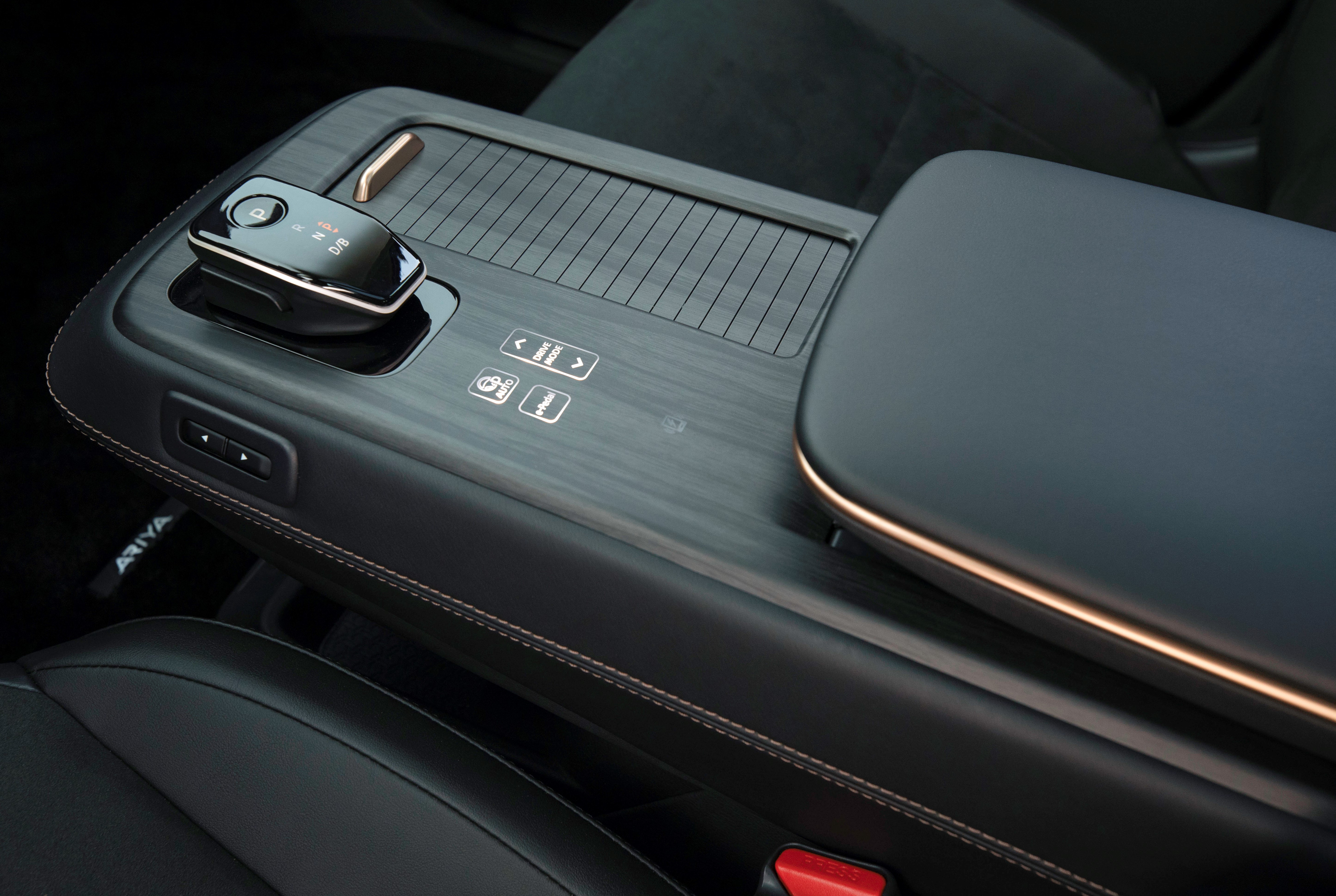