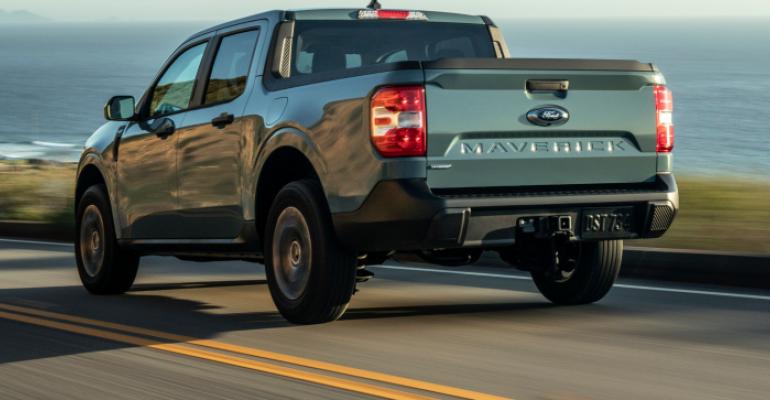 Ford
Four-door, five-passenger Maverick is derived from a unibody platform, with front-wheel drive and a standard 2.5L Atkinson cycle 4-cyl. mated to a CVT.
Vehicles

Pricing will start under $20,000 for the Maverick, which is being assembled in Hermosillo, Mexico, comes standard with a hybrid 4-cyl. powertrain and goes on sale this fall with a 4.5-ft. bed, four doors and room for five occupants.

American pickup trucks have gotten larger and more expensive over the past decade, helping to fatten the bottom line of Detroit’s automakers along the way.

However, with the introduction of the ’ 22 Ford Maverick, Dearborn is reversing course by introducing a truck that is smaller – and more maneuverable on city streets – than the iconic Ford F-150, F-250 Super Duty or even the midsize Ranger.

Going on sale this fall, the Maverick is 199.2 ins. (5,060 mm) long, about a foot shorter than the Ranger, and it sits lower, too. The difference is even more pronounced relative to the F-150 and Super Duty trucks.

The Maverick also is less expensive. Ford officials say pricing will start under $20,000 for the compact pickup, which is being assembled at Ford’s complex in Hermosillo, Mexico, with a standard hybrid powertrain, which also comes from Mexico. The truck will come in three different trim levels – XL, XLT and Lariat.

Heath Hilliard, creative director-exterior design for the Maverick, says the truck was designed to fit into tight urban spaces and carry over features such as the “power dome” hood, strong stance and a bold front fascia with C-clamp light fixtures.

Relative to larger pickups, the Maverick has a lower step-in height and is designed so a relatively small person standing outside can reach over the side and into the truck bed to grab something. “It’s way easier to get in and out of,” says Hilliard, adding anyone moving from a sedan or crossover will find the Maverick a good fit.

The Maverick’s design aims to attract anyone who enjoys do-it-yourself projects, Hilliard says, and the truck bed was specifically designed to make it versatile and easy to use both for projects or for carrying recreation equipment such as bicycles.

Lead interior designer Scott Anderson says the cabin was crafted to maximize available storage, including a deep bin under the rear seat and extra cupholders.

Anderson says the Maverick (interior pictured below) has deep door pockets for laptops and water bottles as well as spaces in the 4.5-ft. (1.4-m) bed for storing tools or rope. The multi-stage tailgate can fold down to carry plywood without the use of a bed extender, the automaker says. 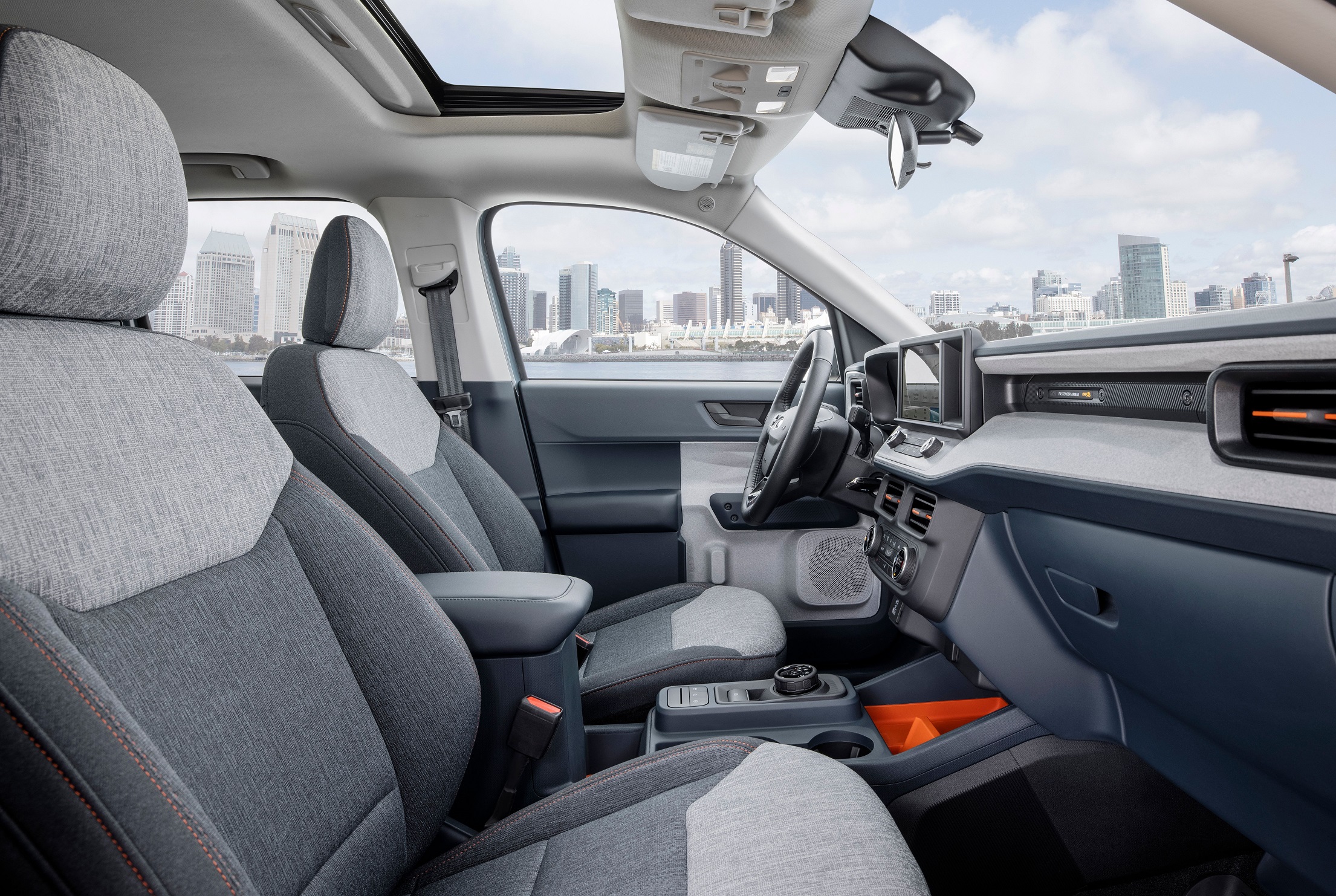 The Maverick uses bright colors and materials such as speckled plastic rather than fake leather or wood, Anderson says. “It’s a truck for people who didn’t know they needed a truck,” he says.

The four-door, five-passenger Maverick is derived from a unibody platform, with front-wheel drive and a standard 2.5L Atkinson cycle 4-cyl. mated to a continuously variable transmission.

Optional is a 2.0L EcoBoost 4-cyl., which produces 250 hp and is available with all-wheel drive in Lariat trim.

Technology onboard includes its own modem and the Ford Passenger Car app enabling remote start. Apple Car Play and Android Auto are standard, and the Maverick will come with Ford Co-Pilot assist, which includes forward collision alert and braking as well as lane-departure warning, blindspot detection and adaptive cruise control.

The Maverick (pictured above and below) is a versatile and capable vehicle that can deliver on the promise of “Built Ford Tough,” says Trevor Scott, marketing manager for Maverick and Ranger. 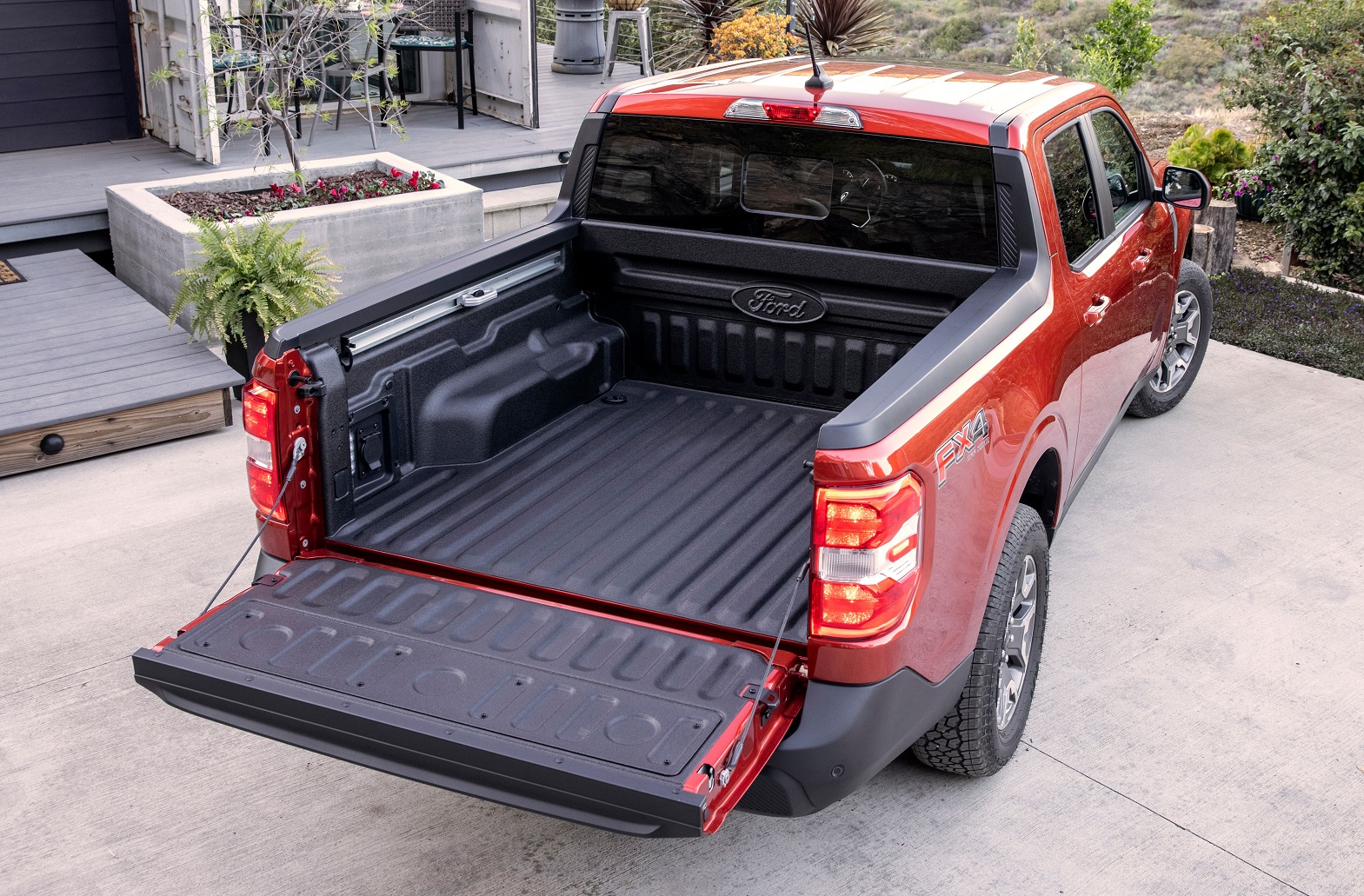